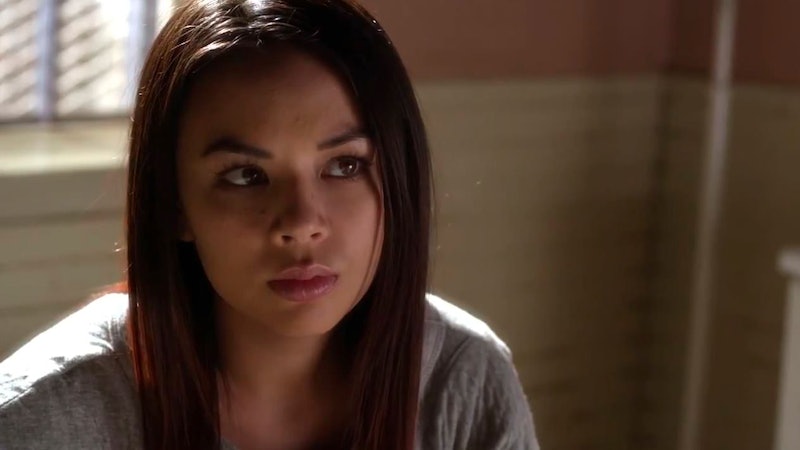 The end of the Pretty Little Liars fatal finale was arguably one of the most shocking moments on the ABC Family show. Not only was the Original A, Mona, attacked by a blonde in a hood, but we also saw what appeared to be Mona's body in the back of a trunk. It was a necessary moment — I wasn't convinced that Mona was really dead until I saw her seemingly lifeless eyes stare at us without blinking. It seems that Pretty Little Liars really wants us to accept that the mysterious Mona is gone forever... which might be convincing if this was a completely different show. After all, we thought that Ali was dead in a ditch — literally — for nearly four entire seasons until she came back in the flesh. Could Mona really be alive too?

It's very, very possible — it might just take some creativity on Mona and the Pretty Little Liar's writers parts. After all, Mona pulled off being A for months, and that took tons of planning and smarts. I know that Mona could fake her own death if she wanted to. Heck, she planned on faking her death anyway, right before (maybe) A attacked her. Here's how Mona could still be alive, even though we saw her body in the back of the trunk.

The Body Is A Fake

Mona was planning on faking her death, and even stored vials of her own blood in a mini-fridge for weeks just so she could make her "murder" look realistic. She could have also built some sort of a doll of her own likeness to photograph and send to the cops. She could have even visited that creepy mask maker from a few seasons ago to get her features just right. The trunk that Mona's body gets tossed in might be Mona's own car — and she could drive it away to freedom from A.

Mona could have staged the entire attack — we know she has a theater background and could probably fake looking like she was being thrown around a room. We know that Mona had cameras all around the house — perhaps her fear was also a part of this performance, just in case the cameras caught her. We know that Mona hated Alison, and even thought she was A — perhaps she wanted to throw her behind bars for good.

She Was Kidnapped By A

Mona certainly looked dead, but what if she was just unconscious? A could have taken her to a lair and held her prisoner instead of flat-out murdering her. Both would keep Mona quiet, and this way, A would be able to use Mona for information on the girls.

The Body Is Mona's Twin

Yep, this is a stretch, but someone has to have a twin on this show, right? Perhaps the person that was in the trunk was actually Mona's sister, and Mona ran away so that she wouldn't end up like her secret twin. Anything's possible on Pretty Little Liars, right?