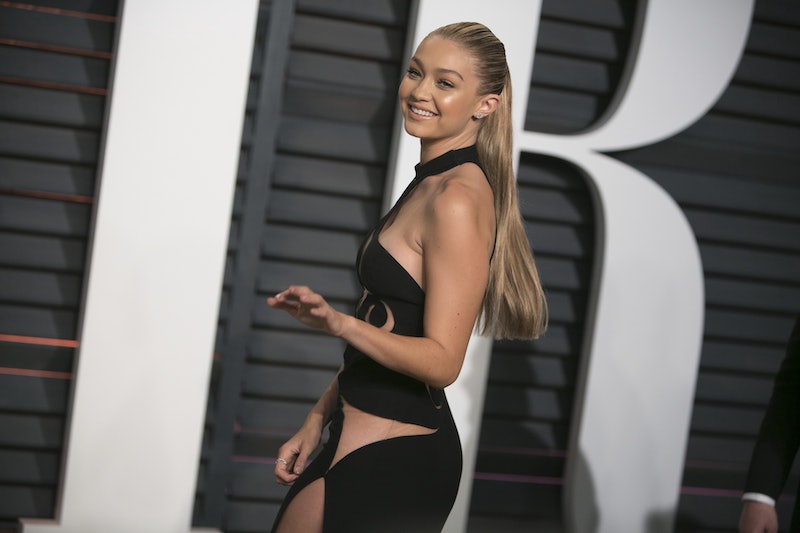 Gigi Hadid looks gorgeous in a new Sports Illustrated video to promote the infamous Swimsuit Issue. The supermodel is fresh from Fashion Month, and it's been a busy spring for her to say the least. This season she walked for Valentino, Balmain, and Michael Kors. She's landed coveted campaigns with the likes of Tom Ford, and Victoria's Secret Pink. Now, she's rolling in the waves (and, undoubtedly, dough) to promote long-awaited bikini season.

I wish I could say I absolutely love the promo video, but I don't. It's a little soft porn for my taste. Gigi is making lots of pouty lips, foaming white waves are all up in her nether regions, and she's frolicking as her bare boobies and bum bounce around. Gigi is beautiful, no doubt, but the video kind of makes me feel like I'm watching HBO after hours. The tatas are tastefully covered, but she's still 19. Watching any sexy video with a topless "teen" in it is a little icky. Lucky me, she turns 20 in April. Whew. *wipes sweaty brow, a result of watching this video multiple times for research purposes*

Yet, I'm madly in love with the spring swimwear Gigi wears so flawlessly. She shows off neon, mixed prints, funky pineapple prints, and 2015's super trend of the runway, fringe. Plus, the most killer cut-out swim top I have ever seen. I'm betting cutout swimsuits will be making a big return in 2015.

Sexy Gigi is one thing, but sweet and sexy Gigi steals my heart. In the "Gigi Hadid Uncovered" video, which accompanies the promo, we get a behind-the-scenes sneak peek of Gigi's SI shoot. This video shows my favorite side of the supermodel. In it, she's laughing, smiling, and graciously interacting with the SI team. We get a look at how hard she works. We also see more of how Gigi and SI incorporated and respected the local culture of the shoot, which was in Hawaii.

And as it turns out, Gigi might possibly be the sweetest to ever grace the catwalk. According to BravoTV.com, the model is really supporting her Real Housewives of Beverly Hills mom Yolanda Foster. Foster was diagnosed with Lyme disease in 2012. Gigi spoke out about her mom's struggle and how she supports her through lots of FaceTime calls and keeping mom updated on life as a jetting superstar.

"She's battling a tough one, but she's helping a lot of people through her personal health journey," she said, according to Bravo. "I think when she finally figures out how to help herself, she'll be able to help a lot of other people ... I'm very inspired."

Aw. Thanks for being as pretty on the inside as you are on the outside, Gigi. We can't wait to see what you do next.

More like this
42 Black Owned Fashion & Beauty Brands To Support Today & Always
By Mekita Rivas, Shea Simmons, Kui Mwai and Dominique Norman
23 Times Meghan Markle Dressed Just Like Princess Diana
By Bustle UK
Hailey Bieber's "Glazed Donut" Nails Are So Minimalist Chic
By Danielle Sinay
Jennifer Lopez's Diamond Mani Shows Off *All* The Rocks That She's Got
By Audrey Noble
Get Even More From Bustle — Sign Up For The Newsletter