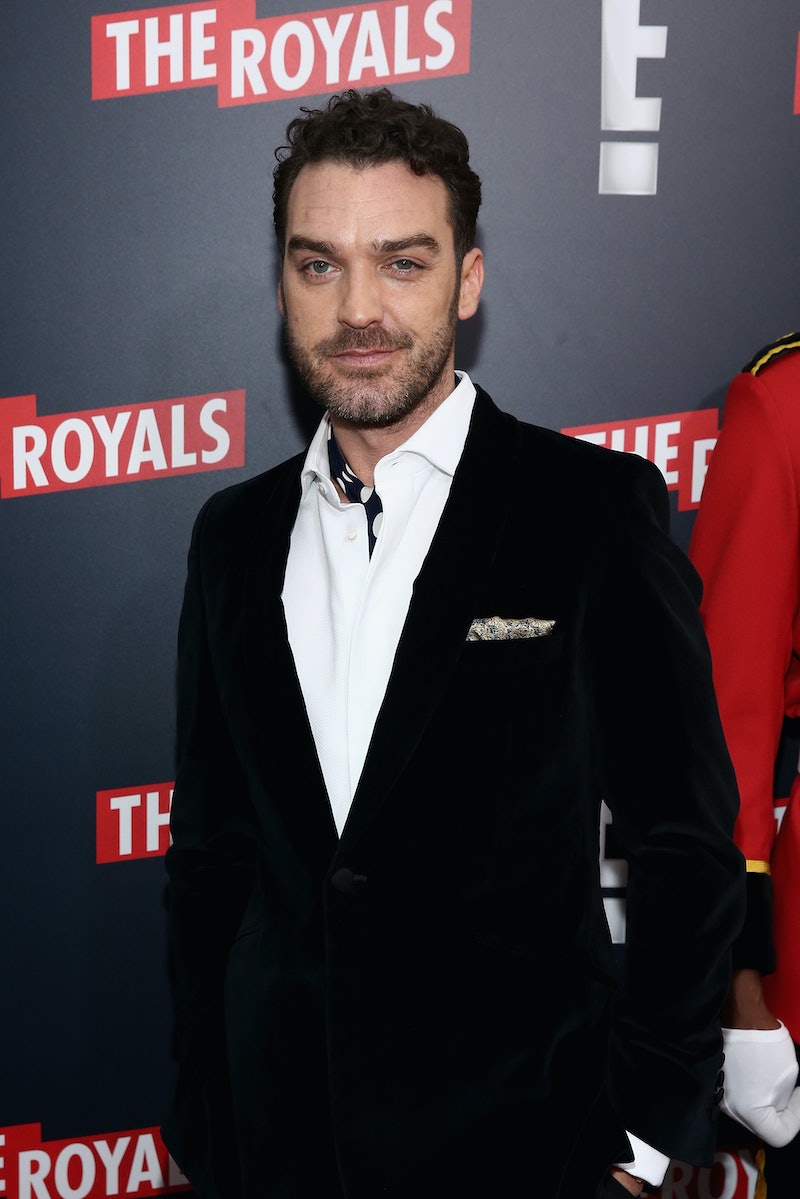 The idea of a royal younger brother trying to usurp his older's brother power as king was made iconic by Shakespeare's Claudius in Hamlet — and oh yeah, Scar from The Lion King. Well — move over, Scar, because there's a new creepy brother-uncle in town with Uncle Cyrus on E!'s The Royals . So who is the man behind the manipulative (and gross) Cyrus? British actor Jake Maskall portrays the scheming younger brother of King Simon on E!'s new scripted show.

Although Maskall may not be as terrible Cyrus, he has been defending his character Cyrus to the outside world. E!'s Kristin dos Santos compared Cyrus to House of Card's Frank Underwood and Maskall said that Cyrus is despicable for "a reason — to protect the monarchy. Well, maybe it's for selfish reasons more." Uh, yeah. I'm pretty sure you don't force employees of the palace to give you blow jobs to protect monarchy, but maybe that's just something my American mind can't wrap my head around.

Of course, Maskall knows his character Cyrus is a creep (he was barely convincing in his defense with dos Santos), but I appreciate that he is playing devil's advocate by supporting his super unlikable character. Plus, it must be fun to play a villain.

So as The Royals Season 1 continues on E! (and with Season 2 already renewed), what do you need to know about the actor who plays Uncle Cyrus?

He Can Do An American Accent — And Sketch Comedy!

For the British sketch comedy show, Very Important People, Maskall was an American scientist who accidentally mixed human and pig DNA to create the evil pig person Perez Hilton. Although the interpretation of Hilton is weird, Maskall's accent isn't too shabby. And though Maskall's scientist made a big mistake, he is used to playing suave and attractive professionals in a number of commercials.

He Starred In A British Soap Opera

Maskall was in the long-running English soap opera EastEnders. He portrayed Danny Moon on over 70 episodes and was a troubled criminal. And he's not the only famous British person to get their start on the show. Emma Bunton (Baby Spice), Jonny Lee Miller, and Hugh Bonneville also made (very) brief appearances on the soap.

He's Open About His Sexuality

When he starred in EastEnders in 2005, Maskall didn't hesitate to reveal that he is gay. The Daily Mail wrote that (the then 29-year-old) Maskall told Now magazine, "I'm gay and I've been with my boyfriend for 12 years. ... It's not a secret. But my relationship's part of my private life and I hope everyone respects my privacy." Wow. What a mature and thoughtful response from the man who is now portraying a character who forces poor maids to give him oral sex. At least that quote makes me believe that Maskall is a way better dude than his The Royals persona is.

He Advertises For Doctor Who

...Well, kind of. Maskall showcases his voiceover work on his website and one of the clips he used to promote his talent is that of a Doctor Who commercial.

At 1:30 in the above clip, you can hear the briefest of brief clips for Doctor Who. His smooth voice has also been featured in commercials for the Royal Navy.

And Most Importantly, He Looks Like Another British Creep — Rufus Sewell

Eh? Eh? The resemblance is there, although I'm sure Sewell's evil turn in A Knight's Tale has something to do with me thinking that. (Uncle Cyrus is kind of similar to Sewell's Count Adhemar.) Sewell has a tendency to portray some disgusting characters, but I still adore him, so Maskall is in good company. And as Cyrus keeps doing despicable things on The Royals, he may become the character we all love to hate.