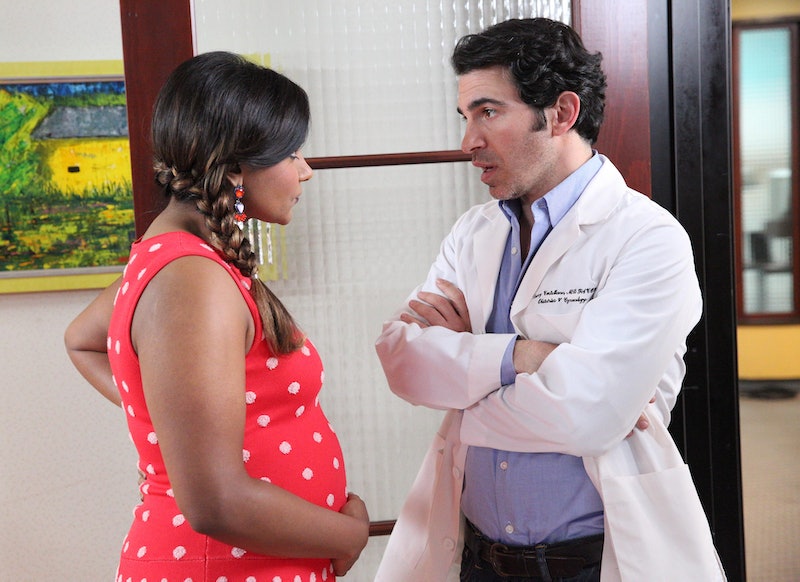 Let me introduce you to my (imaginary) best friend Mindy Kaling. Kaling is the star of The Mindy Project (she is also the creator, writer, executive producer, the whole nine yards). Kaling plays currently pregnant Mindy Lahiri on The Mindy Project , an OB/GYN in New York City who is expecting with boyfriend Danny Castellano. Because Mindy is pregnant — in recent episodes, Mindy's baby bump has expanded — there might be a misunderstanding that Mindy Kaling is also pregnant in real life. Well, I'm here to say, "Exsqueeze me? No, she's not."

The pregnancy on the show came as quite a surprise. After a lot of back-and-forth between Danny and Mindy, I wondered what the show was going to do to shake things up. (Hell would have been raised by me if it was a break-up between the two, so luckily that wasn't the case, because that sounds like a lot of heavy lifting.) Now, I actually quite like the shake up the show chose, since I definitely didn't expect it. Bonus: I can't wait to see where the show goes once Mindy and Danny welcome their bundle of joy (who I just so hope is named something trendy like Jaden Smith Lahiri-Castellano).

But still, don't be this guy (who I seriously hope is joking):

This guy definitely is:

It's important to remember that fiction is a thing and that Kaling is not pregnant. The writers aren't including her real-life twist, they are, well, writing as writers do.

Let me now introduce you to a little Hollywood secret (this isn't that big of a secret, but just play along). The pregnancy suit.

Isn't it preeeeetty? I don't really get why a man is modeling it, but whatever, he's probably jealous women can grow humans inside their bodies, because that's really cool of us women. This pregnancy suit allows not pregnant people (Mindy Kaling) to look pregnant (especially under clothes. The suit alone isn't very convincing). Because Hollywood is all about tricks of the eye, Kaling is wearing a suit like this (probably something a little more streamline, because Mindy is a swanky gal) underneath her perfectly curated wardrobe on the show.

Check out Kaling talk about playing a pregnant woman below, and how the woes of wearing a pregnancy suit is

1) Great for the show's story

2) Bad for her health

And for the record, Mindy, I feel like I eat for The Brady Bunch on the weekends, so you're not alone in that theory of eating for more than one.