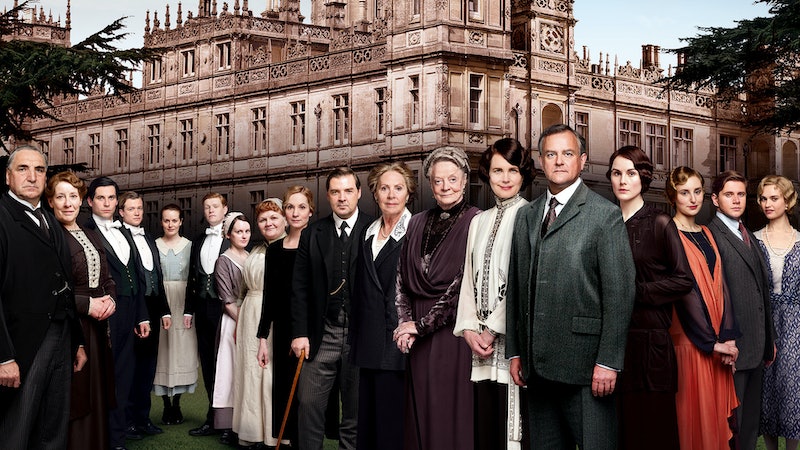 Downton Abbey fans, prepare yourselves for painful news. Tragedy has befallen our beloved Downton. In a shocking turn of events, we have been subjected to news more painful than Sybill's death and Matthew's death combined — the death of Downton itself. In a flurry of rumors, it has been suggested that the sixth season of Downton Abbey will be the last season. Though I don't want to believe that this news could be true, there are a few things that need to happen in Downton Abbey Season 6 if the show is ending.

Though the rumors have not been confirmed yet, it doesn't look good for Downton. As TVLine noted, the cast's contracts expire at the end of Season 6 and "...with one or two possible exception, the actors are ready to move on."

I don't want to accept that Downton Abbey might end. I don't even want to acknowledge that possibility but at least I have some forewarning so I can start easing myself in to accepting that it really might be over.

With that being said, if Julian Fellowes really is going to put me through this, then I have a list of demands of things that must happen in Season 6 so I can get some Downton Abbey closure.

Matthew died. It was sad. Very sad. Then Mary had some fun. Lots of fun. Now, though, I think it’s time for her to finally settle down and find Mr. Right, Part II. I thought this was going to happen last season but nooooooo. So it needs to happen in Season 6.

Lady Edith has got to be cursed or something. She always gets the short end of the stick. Like, first she gets knocked up and then her boyfriend dies —. Lady Edith must have done some bad stuff in a past life, 'cause things always seem to suck for her.

That's why I think she needs redemption in Season 6. I think, given her friendship with Tom, Edith will eventually decide to take Marigold and go to America, the land of the free, to raise her child free of mockery or judgment alongside her good friend Tom. She could reinvent herself and just say Marigold's father died on the journey to America (totally probable) and then she can find a hot, American man to be the stepfather of her kid. Edith gets to be a normal, happy mother and the show can end with happy Edith (who will still be crossing her fingers that Marigold makes a clean recovery from the trauma of being ripped from the family that mostly raised her).

Downton Gets a New Dog

I honestly think I cried more when Isis died than when Matthew or Sybill did. It's high time for a new Downton dog and I think a cute little pup could distract me from facing the realities of the show ending forever. Hopefully a pup with a less controversial name.

We were gifted with the presence of the Marquess and Marchioness of Flintshire in Season 5 as they spiraled towards divorce while we watched on in laughter. Season 6 will give us even more hilarity as Rose's parents continue down the track towards divorce. I can only imagine the awesome battles those two would get into during a divorce settlement. Also, the scandal of a divorce! GASP. It will be awesome.

Bates Falls On the Sword for Anna

I'm still confused as to who killed Mr. Green (was it Mr. Bates in the drawing room with a rope?). Seriously, all Clue jokes aside, I just have no idea who did it. What I do know is that, even if it was Anna, Mr. Bates is not going to let her take the fall for it. I have a bad feeling that Mr. Bates is going to confess to the murder to get her off and the season will end with Bates dying for the woman he loves. I just don't see how these two can have a happy ending. Too much has happened, and they are clearly the star-crossed lovers of Downton. Also Fellowes loves killing people off; I can't imagine a series finale where we aren't emotionally traumatized by the death of someone we love.

Poor Thomas has really been through the ringer. They really toyed around with the Thomas-Is-A-Villain thing for a while and then they had him trying to ignore and change the fact that he's gay. I just want some acceptance for Thomas. Thomas needs to own who he is, win a large some of money gambling, and meet a man who makes him happy. Then they can run off together to the English countryside and live a happy life.

Thanks to her newfound love of knowledge and book learnin', Daisy will go on to become a medical marvel, rediscovering penicillin or doing groundbeaking work in treating typhus or something.

This really needs no explanation. Give me a season of killer Maggie Smith one-liners or give me death.

More like this
'Stranger Things' Season 5 Will Echo Season 1 In A Key Way, The Duffer Brothers Confirm
By Kadin Burnett and Sophie McEvoy
Netflix Reveals First Look At Wednesday In The 'Addams Family' Spinoff Series
By Bustle Editors
Who Plays Trent In 'Never Have I Ever'? Benjamin Norris Calls His Character A “Himbo Stoner”
By Grace Wehniainen and Radhika Menon
'Better Call Saul’s Co-Creator Explained Jimmy & Kim’s “Happy Ending” In The Finale
By Brad Witter
Get Even More From Bustle — Sign Up For The Newsletter