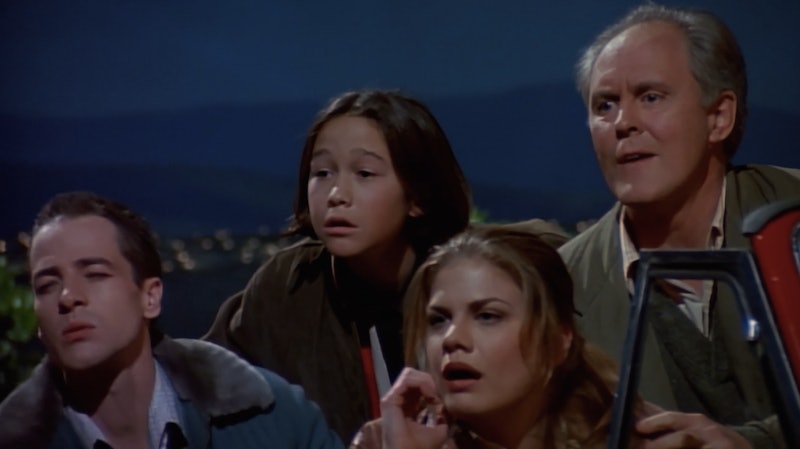 History has shown that I will watch a lot of wonky things when the end of the rainbow promises Joseph Gordon-Levitt, and that's why I'm latching onto 3rd Rock From the Sun right now. 3rd Rock just made it's Netflix instant stream debut this week, and it's waaaay overdue, to the point where I barely remember anything about the show to begin with. The series was on from 1996 to 2001, so my age was in single digits for the majority of it's run. Basically, while I definitely remember it playing in the background of my childhood, I still can't recall the specifics of every single episode... and I'm sure I'm not alone in that.

The premise isn't complicated. In short, four aliens, Dick (John Lithgow), Harry (French Stewart), Sally (Kristen Johnston), and Tommy (Gordon-Levitt) masquerade as the Solomon family, sent to observe humans. Dick becomes enamored with the human race, his college Dr. Mary Albright (Jane Curtin) and this new sensation called "feelings," so he decides to extend this research indefinitely. That's it. That's the plot. It's basically like Invader Zim , except nothing like it.

You'll see soon enough if you're up to joining me on this new adventure in binge-watching. But if you're not quite ready to launch, allow me to prep you on what to expect from this extra strange extraterrestrial TV show.

3rd Rock From the Sun was filmed in front of a live studio audience, as evident by this background straight out of my 8th grade production of The Music Man

It's really a unicorn in that sense, as jokes reinforced by laughter mostly died out in the 2000's, and mockumentary style shows have dominated this past decade. Although it's still pretty much in line with it's sitcom contemporaries (Friends, Seinfeld, etc.), the approach still looks really retro the modern viewer.

And again, that background. Yikes.

The animated planets between scene

Basically to transition to the next location, an animation of different planets would appear, accompanied by a guitar twang or something of that nature. I actually DO vaguely remember this, and I'm sure after a few episodes it'll drive me mad.

The remarkable squinty-ness of French Stewart

Joked about early in the pilot, when he remarks "I can't see out of my eyelids," not knowing that they're "manual." Stewart doesn't actually look like that though, that's a trait he specifically came up with for the character during the audition. "It's sort of the equivalent of your mother telling you not to make faces because they might stick that way forever. Well, I've now got a face that's stuck," Stewart said back in 1997.

The crazy sexual innuendo woven into the dialogue

HAHAHAHAHA... ew. Yeah, that's a joke that would go over the head of a 5-year-old.

They're definitely not martians

"What are you, from Mars?" asks Dr. Solomon's assistant Nina after some probably batshit insane conversation.

"MARS? Oh, no!" he responds, laughing uproariously. So that eliminates that possibility, and while I could probably look up their planet of origin, I'm trying to keep this spoiler free. Suffice to say Dr. Solomon views Mars as Intergalactic Camden.

Everything about Baby Gordon-Levitt

I mean, the most important footnote most millennials make about 3rd Rock is that it once starred the renaissance man slash everyone's indie imaginary boyfriend. You even probably remember that lanky surfer hair of his. But even in those faint memories, you probably don't remember him THIS young, with that awkward cut not even grown out. Gordon-Levitt is about 15 here, but he's so tiny and clearly pre-pubescent that he looks maybe 12. It's both adorable and makes me feel super sleazy, so let's move on.

Little Gordon-Levitt is supposed to be OLDER than John Lithgow's character and somewhat above him in rank, but Dr. Solomon clarifies that because he's bigger, he makes the rules. Size matters on this planet, after all.

Sally, likewise, is of a high enough ranking where Teensy Gordon-Levitt has to ask permission to speak... and she's technically a dude. But because she "lost," she gets stuck as a woman. This explains why her style is Annie Hall-meets-car-mechanic and then transitions to an almost cartoonish parody of femininity in the last scenes; she's adapting to being a woman.

And yes, pushing them together does make them more powerful.