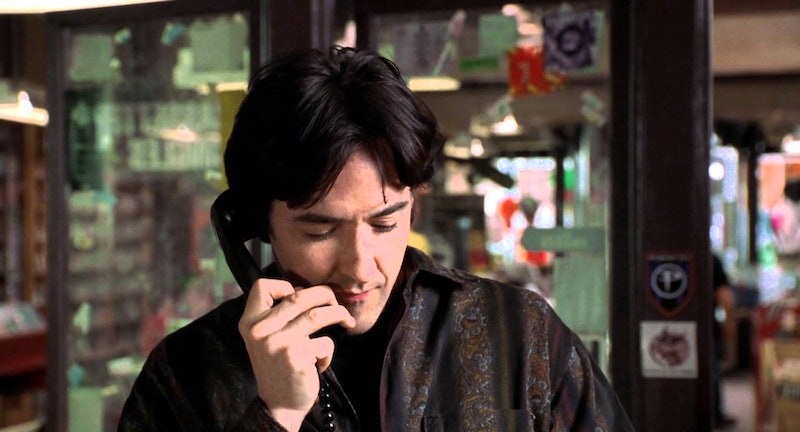 High Fidelity may be considered a guy's movie, but the realism of the 2000 John Cusack film can apply to anyone (and the soundtrack is pretty freakin' amazing). In honor of its 15-year anniversary, I revisited the movie and concocted my own High Fidelity -inspired top five list — the top five things you didn't know about High Fidelity. Most fans know that the movie is based off of the 1995 Nick Hornby book of the same name. A master of writing about men's emotions in witty and compelling novels (Hornby's About a Boy and Fever Pitch were made into movies too), his book was excellent source material for the movie.

Hornby also happens to be British — thus, the book High Fidelity was set in London, but Cusack and crew (Cusack was one of the writers on the film) moved the story to the good ole U.S. of A. (Kind of like Fever Pitch, which is known in the U.S. as a Jimmy Fallon and Drew Barrymore movie about baseball — but the book is actually about soccer and Colin Firth was in a more faithful film version back in 1997. Mind=blown.) And thus, with Rob's last name changing from Fleming to Gordon, London becoming Chicago, Joan Cusack costarring, and Rob standing outside of an ex-girlfriend's window — a John Cusack-ified Rob was born.

Now, if you haven't watched High Fidelity in years, you may have forgotten about the rest of the stellar cast, including Jack Black (well, you probably didn't forget about him), Tim Robbins, and Catherine Zeta-Jones. (Cusack and Zeta-Jones would play exes again the next year in America's Sweethearts). And another fun fact: the year before High Fidelity came out, Zeta-Jones and another actress on Rob's top five breakups list — Lili Taylor — starred in the horror film The Haunting. But let's get to the stuff about the movie that you most likely didn't know. And yes, there was a Broadway musical inspired by the movie, but it was apparently so bad that I didn't feel like Rob would appreciate its incorporation in this list.

John Cusack Was Nominated For A Golden Globe

Andy Bellefleur Was Buddies With Rob

True Blood fans rejoice! Chris Bauer (who portrayed bumbling Andy Bellefleur on the HBO show) is in High Fidelity for a hot minute alongside Joan Cusack. According to IMDb, his character's name is Paul and though it's not much of a role, the familiar-faced character actor was also in Season 2 of The Wire and an array of other movies and TV shows. Another great spotting? Drake Bell in a quick scene as junior high school Rob. And, of course, there's the Boss himself — Bruce Springsteen — who delivers a cameo in Rob's imagination and provides our hero with some sage advice.

The sexy singer Marie De Salle (it's Marie LaSalle in the book) is portrayed by former The Cosby Show-kid Lisa Bonet. Not only is it a great tie-in that Black's Barry makes a joke about Rob wearing a Cosby sweater before Bonet hits the scene, but her character's CD apparently has some interesting covers on it. She famously sings Peter Frampton's "Baby, I Love Your Way" in the movie, but her CD also includes the songs "Ghostbusters," "Baby Got Back," "My Heart Will Go On," and none other than Hanson's "MmmBop." You don't get to hear Bonet sing any of these songs and I struggled to see the list myself while watching the movie, but just the idea of these covers existing makes me happy. (Although, would Rob really have slept with a woman who covered Celine Dion?)

Mike Newell, the director of Harry Potter and the Goblet of Fire was one of the executive producers of High Fidelity . Of course, the British filmmaker has done a lot more work than to be credited just as a "Harry Potter director," including directing Four Weddings and a Funeral. He even directed 2007's Love in the Time of Cholera, which Rob says he read in High Fidelity (and is referenced in another Cusack movie — 2001's Serendipity).

Although I can find no reputable source quoting Regina Spektor directly on this, many websites claim that Spektor said she was inspired to write "Fidelity" while watching the movie. If any film could inspire great songwriting from musicians, High Fidelity is it. Even if the rumor is not true, it's still fun to listen to "Fidelity" again while paying close attention to the lyrics ... it definitely seems like something Rob would do.

More like this
Zach Gilford Admits He Forgot Taylor Swift's Name When He Starred In Her Music Video
By Jake Viswanath
Britney Spears Shares & Deletes Photos Of Justin Timberlake From 22 Years Ago
By Jake Viswanath
20 Years Ago, J.Lo Was Supposed To Kiss Madonna With Britney At The VMAs
By Jake Viswanath
12 Years Ago, Austin Butler Manifested His Oscar Nom In This Disney Movie Scene
By Jake Viswanath
Get Even More From Bustle — Sign Up For The Newsletter
From hair trends to relationship advice, our daily newsletter has everything you need to sound like a person who’s on TikTok, even if you aren’t.