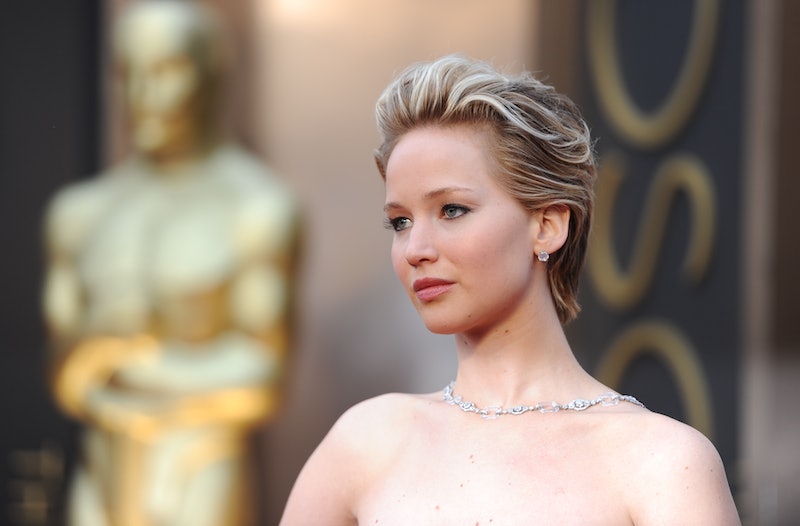 Earlier today we made the horrific discovery that Jennifer Lawrence will be done playing Mystique in the X-Men franchise after she wraps the next film, X-Men: Apocalypse. And to make matters worse, we don't even know the details of her departure, whether it was her decision, or if her character dies, or if she just couldn't stomach working with her ex-boyfriend Nicholas Hoult anymore. It's anyone's guess. But the one thing we're sure of is the fact that we've been taking all day to react to this news. I'm sure I speak for everyone when I say we haven't been quite the same since we heard.

Now normally when you get hit with a tragedy like this, there's a very set way that your body goes through it. It's called the Seven Stages of Grief and it has bargaining and denial and all that, blah blah blah. But this isn't a normal case, so our reactions are far from normal. For one thing, there are eight stages, and for another, they're real different. And pretty weird. Just know that if you experienced any of the following things, ideally in the following order, you're 100 percent normal and there's absolutely no need to go see a doctor. No matter what your coworkers say when they see all this going down in your cubicle.

To clarify, this isn't your normal shock; this will literally feel like all the power of Scientology is pulsing through you. In a surprising and very unpleasant way.

Hope you didn't have anything fragile near your desk.

Clear a space, cause you 'bout to hit the floor.

Hate to break it to you, but it's all downhill from here.

Take a page out of the Villanova piccolo girl's book and just do your best to play through it.

Don't panic, it's just your body doing its best to get you closer to a movie theater in time for X-Men: Apocalypse's premiere in May 2016. Go limp and ride it out.

To be fair, this might be from that spicy mac and cheese you just snarfed for lunch, but also your heart was bound to get involved sooner or later and is likely on fire from pure sadness.

We're right there with you.

Now rinse and repeat. We'll all get through this together.