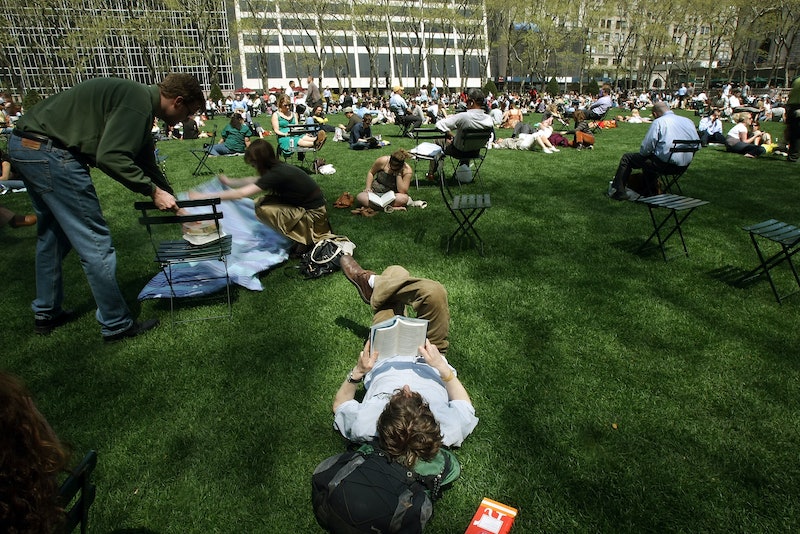 You know the slogan you learned in elementary school, "in like a lion and out like a lamb"? As March turns to April, we are standing firmly in the lamb portion. And springtime is one of the best times for reading because you can finally put away your mittens and quirky ear muffs, grab a blanket, and bring your favorite stack of April 2015's best YA books out into the grass to read in the sunshine. (Can't you already feel it? We're all so warn down by winter we need this.)

There are loads of new young adult novels for April that will keep you out on that grass from day to night. You'll find swashbuckling adventures, epic fantasies, and psychological thrillers that will have you turning the pages until the sun starts to set and you have you squint to the see the words, not that that will stop you. There are hilarious stories that will make you look like the crazy person who chuckles to herself. And there are meditative reflections on mental illness that will have you captivated in their hopeful stories, against all odds. And OK, yes, there are books that are going to make you mad because of how perfectly they depict the issues in modern society with rape culture mentalities. We need all of these kids of books.

To start your spring reading, here are the top 14 YA books for April 2015.

Kristin Lattimer's story in None of the Above should be an eye-opening read for many of us. When the star athlete and homecoming queen decides to lose her virginity to her high school boyfriend Sam, she experiences immense pain, leading her to make an appointment with her OB-GYN. The doctor diagnoses her with androgen insensitivity syndrome (AIS), which is more commonly known as "intersexuality." But it's when that diagnosis slips out in her high school that Kristin experiences extreme bullying, even from Sam — though there is a shining light of compassionate, open-minded friends who rally around her. It's a painful story to get through, but it's one that must be told and it supports anyone who has ever felt "other."

The two titular, unnamed protagonists find release and a connection in poetry, which they write and eventually share with each other. Both teenagers use poetry to lay bare their life stories, filled with hurt and confusion, especially as an abusive relationship is revealed. Jaskulka's, and in turn, the teenager's, prose is both graceful and gritty, and it's some of the most honest emotions you'll see on the page.

Debut author Becky Albertalli worked for several years leading a support group for gender-nonconforming children and teenagers in D.C., which is probably why her protagonist Simon leaps off the page, as alive as anyone you've ever met. Drama-adverse Simon hasn't yet come out of the closet, so when his classmate Martin takes a screenshot of some suggestive conversations between Simon and boy with the screenname Blue, he submits to Martin's blackmailing, forced to act as his wingman. Albertalli's book deals with important issues, but it's so bright and funny and alive and real, it's an absolute pleasure to read every page.

In this social media, share-what-you-had-for-lunch, baby-pictures-galore world we live in, offbeat novel The Truth Commission acts as an experiment in the balance between privacy and what people deserve to know. Will the truth really set you free? Normandy has been the not-so-well-disguised subject of her sister's insanely popular graphic novel series, so she's used to having her life displayed for everyone. As a campaign against gossip, Normandy and her friends form The Truth Commission, committed to asking the tactless questions and bringing truth to light.

The novel is experimental in its construction itself: the book acts as Normandy's "narrative nonfiction" project for her art school, and it contains notes to her creative writing teacher, footnotes, and illustrations.

All the Rage by Courtney Summers (Apr. 14; St. Martin's Griffin)

So, to put it plainly: All the Rage is going to make you feel all the rage. And that's because Courtney Summers takes a woman's brutal reality and puts it on the page, screaming the injustices with her pen. Nobody believes Romy Grey's story about what the sheriff's son Kellan Turner did to her. And not only that, she's branded a liar and bullied, a sadly all-too-familiar story. So when she believes that Kellan may have assaulted another woman, she has to figure out whether she can face it to again state her story to everyone who never believed her the first time around.

Set against a beautiful backdrop of Florence, Italy, One Thing Stolen follows teenager Nadia Cara's devolution into mental illness. She can't explain why she's suddenly started stealing things or why she starts following these glimpses she has of an Italian boy. Nadia's memories and past are interwoven into the present, which is told in short, stunted sentences as the character herself loses her ability to speak. Kephart bring an artistry to the story, which knows there is hope in even the most dire circumstances.

Lamar Giles' heroine goes by many names: Her classmates know her as Lauren or by her nickname Panda, but she secretly also goes by Gray, her screenname for the anonymous photoblogging site, aimed at exposing student and teacher secrets in her school. It's a little exercise in karma, if you will. But when the subject of one of her blogs is killed, an Admirer sends Panda the picture, letting her know she knows her identity. Giles' story is a true psychological thriller, as the Admirer blackmails Panda into performing dares, lest he/she reveal her identity to an entire school she has exposed.

Neal Schusterman's son Brendan illustrated his latest release Challenger Deep, probably the most personal work Schusterman has ever published. Brendan was diagnosed with schizophrenia at age 16, and Neal and the rest of his family were supportive and instrumental in getting him the assistance he needed to live a life with his condition under control. Challenger Deep parallels Brendan's real-life story, and the prose is complemented by actual artwork Brendan completed while in the midst of schizophrenic episodes. It's an immensely powerful and at-times haunting piece of work from the father and son team that will linger with you.

We all know the reasons why sexual assault cases go unreported, and Kristin Halbrook's book looks into one of these cases. She deftly discusses rape culture and the problematic "boys will be boys" mentality that pervades many small towns (and large ones, too). In Every Last Promise, Kayla witnessed a classmate's sexual assault at a party, but she didn't report the crime, choosing to keep her mouth shut. As the story progresses, we learn her reasons.

An Ember in the Ashes by Sabaa Tahir (Apr. 28; Razorbill)

Laia is a slave. Elias is a soldier. Neither is free. Sabaa Tahir builds a fully realized Ancient Rome-like world in the Ember in the Ashes to tell the story of the impoverished spy Laia and the unwilling soldier Elias. When Laia's brother is arrested for treason against the Martial Empire, Laia works as a spy pretending to be a slave in the empire's military academy, with the hope that a rebellious group will help save her brother. That's where she meets Elias, who wants nothing more than to abandon his post in the military, he doesn't believe in the empire's rule. The book is a cinematic epic that will have you completely lost in Tahir's world, but you won't even mind when you miss your subway stop.

Lying Out Loud is a companion novel to The Duff — 'nuff said, right? Sonya "Sonny" Ardmore is a compulsive liar, and she's darn good at it. No one except her BFF Amy knows that she's been living at Amy's house because he father is in prison and her mother kicked her out. So when Ryder, the snobby new kid in town, expresses his interest in Amy, Sonny thinks its the perfect time to continue her lying streak and prank him. Except, in the middle of chatting with him as Amy, Sonny starts to fall for Ryder. Suddenly the prank turns around, lying to Amy and trying to pique Ryder's interest in her instead. All the scheming is totally fun, though you know this isn't going to turn out all hunky dory.

The Girl at Midnight by Melissa Grey (Apr. 28; Delacorte Press)

The Girl at Midnight juxtaposes modern-day New York City with a long-lost civilization — or so you've been lead to think. Avicen are an ancient line of people who use enchantments to hide themselves from modern humanity. Except there's Echo, who can see through that enchantment. Oh, readers, you are going to love Echo. She's a feisty, daring teenager who considers the Avicen family because they raised her as one of them. She becomes caught in an ancient war with a dragon-like species, called the Drakharin, and Echo must race to find the key that could stop the war and save the world.

The Game of Death and Love by Martha Brockenbrough (Apr. 28; Arthur A. Levine Books)

The Game of Death and Love is the love story of all love stories, literally. Love and Death are personified The Book Thief-style, as they pick their players: Romeo and Juliet, Antony and Cleopatra, and every pair of star-crossed lovers in the storybooks of history. And in their game, the roll of the dice, Death has always beat out Love. So, Flora Saudade, a black 1920s jazz singer who dreams of taking flight, and Henry Bishop, the white adopted son of a wealthy family, have no shot in their romance, right? It's a magically romantic story that will test the fates and see if Love can ever conquer all.

With a nod to the classic The Scarlet Pimpernel, Rook brings the guillotine back in futuristic Paris, beset by a rebellion and now known as The Sunken City. But this isn't a technology-laden dystopian vision; in fact, all modern technology has been lost and it feels far more like vigilante stories of the past than Blade Runner. Sophia Bellamy is a killer protagonist. She's an abiding family woman by day, but she moonlights as a Red Rook, a savior of prisoners in the Sunken City. Meanwhile, her arranged marriage fiance Rene seems a whole lot more interesting than she expected, but she's just not sure if she can trust him. With all the twists and turns, often at the hands of Sophia herself, you're going to be locked into this one.