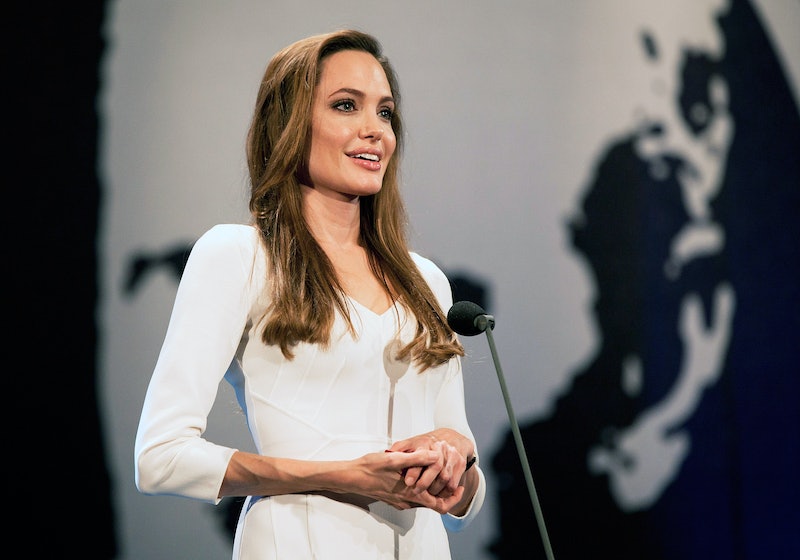 If you have some time at your desk this morning, you should read "Diary of a Surgery," the New York Times op-ed that Angelina Jolie wrote about having her ovaries and fallopian tubes removed. It's poignant, thoughtful, and powerful. Throughout her account, there's a definite sense of triumph inherent in her sharing her story in such a public way.

Jolie made the decision to surgically remove her ovaries and fallopian tubes, a procedure that would render her unable to bear children, after receiving some suspicious blood test results. Having a family history of cancer, various doctors assessed that she had a 50 percent chance of contracting ovarian cancer, a disease that claimed the life of her own mother. In order to preserve her peace of mind, and to rest easy about the fact that her own kids wouldn't lose her to ovarian cancer, she made the difficult choice to undergo the surgery. She wrote,

It is not easy to make these decisions. But it is possible to take control and tackle head-on any health issue. You can seek advice, learn about the options and make choices that are right for you. Knowledge is power.

Jolie is adding another valuable personal story to the dialogue of reclaiming one's agency in the face of a disease that makes you feel powerless. In confessing her own experiences, Jolie is letting other women who have lived through similar experiences know that they're not alone.

However, this is hardly the first time that Jolie has taken control over her personal media narrative, and used it for the greater good. I can think of a few more examples off the top of my head in which she's broken news about her own life and used the media attention for a positive result.

We live in a world that places a high value on celebrity baby pictures, and on multiple occasions Jolie took advantage of this for a charitable reason. In 2005, when Shiloh was born Jolie and Brad Pitt sold the photos to Getty Images in exchange for a charitable donation, as well as making a reported $4 million from People and Hello! magazines. In 2007, with adopted son Pax, a similar deal with Getty occurred. And in 2008, when the Jolie-Pitt twins were born, as Today reports, the famous couple sold the pictures of their babies to People and Hello! for a total of $14 million. Many of these profits when to the Maddox Jolie-Pitt Foundation. Also, there's the important fact that she didn't allow anyone to try to release the pictures in her wake.

Jolie had a similar strategy with her wedding dress pictures as she did with the baby pictures. In February 2014, Jolie married Brad Pitt, and they reportedly sold the images of her wedding dress to People and Hello! for a total of $5 million. According to The Mirror, everything went to the Maddox Jolie-Pitt Foundation.

Similarly to her more recent essay, Jolie discussed the difficulty involved in making the choice to receive a preventative double mastectomy in her 2013 NYT essay "My Medical Choice." Doctors assessed her risk of contracting breast cancer at a whopping 87 percent, and this was her way of taking action. She said the choice was hardly an easy one, but hopes that other women can benefit from her sharing her experience. "I choose not to keep my story private because there are many women who do not know that they might be living under the shadow of cancer," Jolie wrote. "It is my hope that they, too, will be able to get gene tested, and that if they have a high risk they, too, will know that they have strong options." Preach, Angie.

More like this
Chrissy Teigen Reveals Her Miscarriage Was An Abortion That Saved Her Life
By Radhika Menon
Ryan Reynolds Shared His Colonoscopy On The Internet After Losing A Bet
By Jake Viswanath
UK Viewers Will Have To Wait To Watch The Handmaid’s Tale S5
By Maxine Harrison
15 Offensive AF Jokes In 'Friends' That Really Aren't OK
By Tolly Wright, Bustle Editors and Meguire Hennes
Get Even More From Bustle — Sign Up For The Newsletter