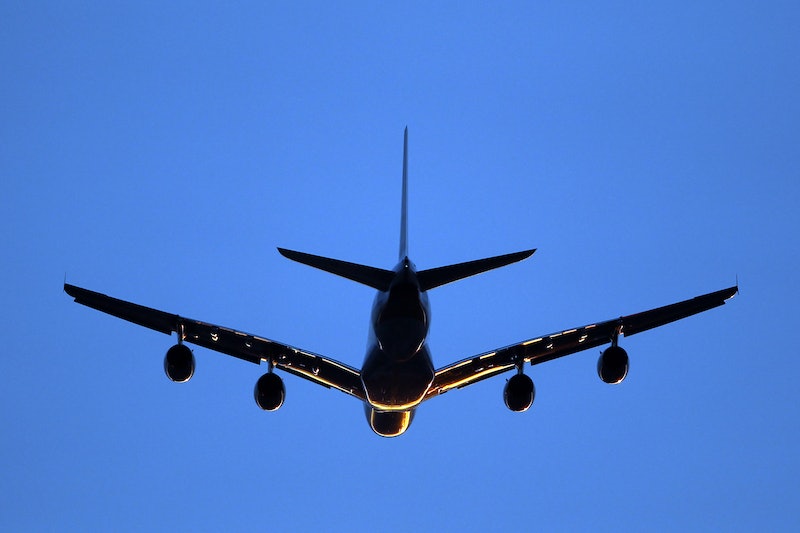 After news of Germanwings Flight 4U525 broke this morning, many undoubtedly began asking the question, is it still safe to fly? In a word: Yes. We already know that Airbus A320 jets have a solid safety record; assorted incidents have occurred with the planes over the years, but as Bustle's Jenny Hollander wrote, that doesn't necessarily speak to the relative safety of them. Indeed, although the Airbus A320 has seen its share of accidents, it's still definitely safe to travel on it. The same is true of Lufthansa, Germanwings' parent company. And although accidents do occasionally happen during air travel, that doesn't necessarily mean that it's no longer safe to fly.

You've probably heard the saying that car accidents lead to more fatalities than aviation accidents — and it turns out it's true. In 2006, the odds of dying in a car crash were roughly one in 5,000; meanwhile, plane crash were about one in 11 million. But that isn't the only reason you shouldn't be afraid to fly — there are plenty of other ones, too.

I don't mean to diminish the tragedy of Germanwings Flight 4UA9525; it's still a terrible thing to have occurred, as is any other aviation accident of this magnitude. We don't, however, need to swear off of air travel forever or condemn the entire airline industry in response. Here are 10 reasons why.

1. You're less likely to die in a plane crash than you are from a bicycle accident, being hit by lightning, or even a bee sting.

According to statistics from the Natural History Museum of Los Angeles County, MIT, and UC Berkeley, the odds of dying in a bicycle accident are 1 in 88,000; for being struck by lightning, they're 1 in 1.9 million; and for being stung by a bee, they're 1 in 5.5 million Not that I'm trying to make you afraid of your bike or anything, but the numbers are worth bearing in mind.

Travel and Leisure reported in 2014 that out of the 301 airline accidents that have occurred worldwide over the past decade, fewer than a quarter of them involved fatalities. As MGA Engineering test engineer David Esse told T+L, “You read about planes that lose altitude. You hear about planes where the landing got botched and it slid off the runway into a pile of dirt. Very few people will die in those events.”

If you're still not convinced, though, here are a few more figures: According to the International Civil Aviation Organization (as quoted by The Guardian in 2014), there were around 32 million airline departures in 2013. Fewer than one flight in 300,000 of those flights had an accident, and only one in 3,000,000 was fatal. The odds are pretty squarely in your favor.

4. Technology has upped the game.

Speaking to Travel and Leisure, Boeing spokeswoman Julie O'Donnell noted that “during the 1950s and 1960, fatal accidents occurred about once every 200,000 flights.” These days, though? She said “the worldwide safety record is more than 10 times better, with fatal accidents occurring less than once every two million flights.” The figure has a lot to do with the advancements in technology made in recent years: Things like satellite global positioning and better telecommunication have enabled a level of precision that just wasn't possible 50 or 60 years ago.

Getting your pilot's license is nowhere near as simple as getting a driver's license. You need to complete coursework in physics, aeronautical engineering, mathematics and English in a program approved by the Federal Aviation Administration; you need to have 250 hours of flight time to get a commercial pilot's license and 1,500 hours of flight time for an airline transport pilot certificate; you need 40 hours of instrument flying experience under your belt; and so on and so forth. You can join the military to get all this done, but either way, it's intense, and it can take years.

6. So is pilot hiring, for that matter.

Airlines often require potential pilots to take physical, psychological, and aptitude tests; pilots need to be able to put everything else going on in their life aside for the entire time they're in the cockpit, so airlines need to make sure the folks in their cockpits have that skill before hiring them. They also usually require an addition six to eight weeks of training once a pilot has been hired on, regardless as to how experienced he or she may be.

7. In fact, being a pilot is an incredibly self-selecting career.

The bottom line is that if you're not cut out for being a pilot, you probably just won't be one. As form TWA VP of corporate safety Hugh Schoelzel said to Travel and Leisure, “If the wife filed for divorce or the kid smoked pot or you had a bad score on the prostate test, the pilot can set that aside. It's not that they don't worry, but you can't worry about that while making a takeoff on a 777. Not everybody can do that, but virtually all pilots can.” The self-selecting nature of the gig means you're likely to be in safe hands while you're both on the runway and in the air.

8. Turbulence is generally a “convenience issue, not a safety issue.”

According to active airline pilot Patrick Smith of Ask the Pilot (which previously existed as a long-running column on Salon), turbulence is usually seen by the pilot as annoying, not dangerous. “For all intents and purposes,” Smith wrote, “a plane cannot be flipped upside-down, thrown into a tailspin, or otherwise flung from the sky by even the mightiest gust or air pocket. Conditions might by annoying and uncomfortable, but the plane is not going to crash.” In incidents of turbulence, pilots are usually more concerned with keeping passengers calm during it than they are about the turbulence itself.

Speaking to the New York Times in 2013, Smith also noted that we've “engineered away” what used to be the most common causes of terrible crashes. One of the biggest improvements he cited was better crew training: “You no longer have that strict hierarchical culture in the cockpit, where the captain was king and everyone blindly followed his orders. It's team oriented nowadays. We draw resources in from the cabin crew, people on the ground, our dispatchers, our meteorologists, so everyone's working together to ensure safety.” Malcolm Gladwell wrote about the pitfalls of hierarchical cockpit culture in Outliers; it's worth checking out if you're curious.

10. We learn from our mistakes.

While we're on the subject of crew training, guess how the current system became the norm? From a lesson we learned during a previous flight. In 1978, United Flight 173, which was transporting passengers between JFK in New York and Portland International in Portland, OR, suffered a landing gear issue and ended up having to circle for a significant amount of time. Although the engineer on board told the captain of the plane's diminishing fuel supply, the captain (who was literally described as “an arrogant S.O.B.” by investigators later on) waited too long to make the final descent, which then caused a crash. As a result of that flight, though, crew training was totally revamped into the team-oriented version described by Smith. Now the industry standard, it has been cited by more than one pilot as one of the factors that led to the successful conclusion of what could have been a catastrophic accident.

The moral of the story: If an accident does happen, then the airline industry doesn't take it lightly. It tries to figure out what happened, and then works to put measures into place that will prevent it from happening again. We may not be be able to stave off accidents caused by things we didn't see coming — but in the event that they do occur, we can use them to make things even safer from then on.

More like this
Anguilla Is The Under-The-Radar Caribbean Destination You Need To Visit
By Rachel Lapidos
Here’s Your Daily Horoscope for December 5, 2022
By Mecca Woods
An Open Letter To The Person Who Bought Steve Jobs’ Birkenstocks For $218,000
By Ginny Hogan
20 Christmas Movie Quotes That'll Get You In The Holiday Spirit
By Alexis Morillo
Get Even More From Bustle — Sign Up For The Newsletter