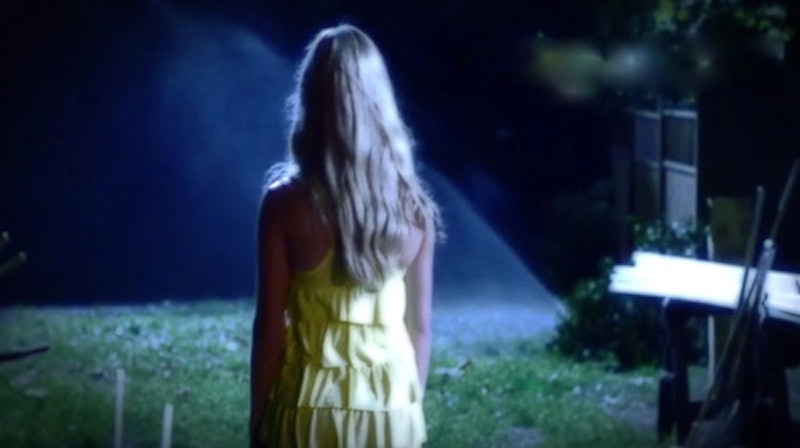 The spring finale of Pretty Little Liars answered the much-asked question, who is A? But in telling us that Charles is A, it opened up about a hundred other questions. One of those unanswered questions is how does Bethany Young fit into the Big A reveal? Ever since Bethany's body was discovered in Alison's grave, fans have wanted to know more. Unfortunately, though, the second half of Season 5 wasn't really dedicated to Bethany, and we're still left in the dark as to where exactly she fits into all this.

But thanks to clues and fan speculation, it's possible to guess at some of the ways Bethany plays a larger role in all this. After all, she's been a mysterious part of the DiLaurentis' lives for much longer than anyone thought. Not only was she doted upon by Mrs. D when she was at Radley, but she and Ali were pen pals and even arranged to see each other that fateful weekend Ali went missing.

I just know that there's more to Bethany than her just being in the wrong place at the wrong time. I'm not even entirely convinced that she's dead. Everyone thought that body was Ali's, so they could be wrong about it being Bethany's too.

After scouring the Internet and my own brain, I've come up with a few theories as to how Bethany factors into Big A's life and that of the liars.

Bethany Was the Baby In The Home Video

Why is everyone assuming this baby is Alison? Perhaps the clue that Mrs. D insisted that Bethany call her Aunt Jessie was because Mrs. D actually was her aunt. That could mean the boys pictured here are Bethany's brothers (maybe Charles and Andrew?) and that Bethany was Mrs. D's niece. It would explain the interest Mrs. D took in both Bethany and Radley and why Alison found two dresses that one Christmas. You often get gifts for your nieces, after all. Perhaps Charles is getting revenge on the Liars (Alison in particular) because he thinks they had a possible role in Bethany's death. (They were all there that night.) There are so many questions, but I think it's very important to note that Mrs. D doesn't identify the baby here, so we shouldn't assume it's Alison.

This is one of the more popular theories circulating the Internet right now. People are speculating that Charles is Jason's twin brother, but that he started to identify as a girl. His father couldn't stand that so he had him sent away to Radley. It was there that Charles took on the identity of Bethany (either inventing the person or modeling it after another Radley patient) finally living out his identity in peace. That could be why Mrs. D bought two dresses, because she supported Charles' wish to be a girl. It also would make sense that Charles would escape Radley and target Alison. After all, she got to live the life of a girl and his mother's daughter uninhibited while Charles was locked away. He was jealous. As for the female body in the grave? Maybe that wasn't Bethany at all. I'm still thinking missing girl Sara Harvey factors into this somehow. (SO MANY QUESTIONS.)

Let's not forget that Mrs. D was having an affair with Bethany's dad. How many affairs could she possibly have had since she also had one with Spencer's dad? Perhaps they're the same person. Bethany could be Spencer's half-sister who was locked away in Radley. I noticed during the spring finale that before Mr. and Mrs. Hastings opened the boxes of stuff about A, Caleb took time to acknowledge that their secrets could be exposed and Mr. Hastings looked nervous but decided to go through with it anyway. Will his secret other daughter be exposed? Who knows, but poor Spencer just keeps gaining siblings every season.

Here's another twin theory for you. The anagram on the card found in Mona's room can also spell out Rachel S. DiLaurentis. Perhaps Bethany is really Rachel, and her parents changed her name when they sent her to Radley so she couldn't be linked back to them. That would explain the fascination Mrs. D had with her, and I. Marlene King didn't flat out say no when asked if Bethany was someone's twin.

Maybe Bethany's dad that Mrs. D was having an affair with was Byron Montgomery. He's always been sketchy and a cheater. Besides he has that history of mental illness in his family (with his brother) so Bethany could have inherited that and that's what sent her to Radley. Besides, I don't think it's a coincidence that Bethany was from Bryn Mawr which is in Montgomery county. Maybe she and Charles met in Radley and formed a relationship and he knew how angry she was at being locked up while her sister Aria lived a happy life. Perhaps when Bethany got killed, Charles decided to pick up where she left off on her trail of revenge and started terrorizing Aria, Alison (and their friends) for Bethany.

Perhaps while in Radley the two of them met and started a relationship. It would explain Mrs. D's interest in her if she wanted to get close to the girl her son was dating. It would also explain that if he thought the Liars or Alison injured Bethany in some way, Charles would of course go after them; he'd lost the love of his life.

Andrew, Bethany, and Charles Are All Related

Another theory suggests that Charles was adopted into the Campbell family who already had two children, Bethany and Andrew. Maybe that home video footage of Mrs. D is her trying to convince Charles that this is his new family now and that's why she's pressuring him to act like Bethany is his sister. Maybe when Bethany was admitted into Radley, Mrs. D feared that she was unstable and would reveal the secret that Charles wasn't her real brother, so Mrs. D took an interest in Bethany to stay close to her. This could have angered Charles considering that his real mom was now paying attention to his fake sister and he could have wanted to retaliate by taking away her real daughter which is why he targeted Ali.

There are about a million different ways this could go but one thing I'm certain of is that Bethany plays a big role in all this, and she's somehow connected to Charles. I can't believe we have to wait until this summer to figure everything out! But in the meantime, Pretty Little Liars fans will continue to speculate until our brains completely turn to mush.

More like this
The 'PLL: Original Sin' Creators Say A’s Identity Will Be “Very Clear” By The Season Finale
By Alyssa Lapid
Every Horror Movie Reference In The 'PLL: Original Sin' Premiere
By Alyssa Lapid
Dr. Anna Pou Is Still Practicing Medicine After Facing Murder Charges
By Brad Witter
‘Stranger Things’ Stan Megan Thee Stallion Grilled Natalia Dyer About Nancy & Steve
By Brad Witter
Get Even More From Bustle — Sign Up For The Newsletter