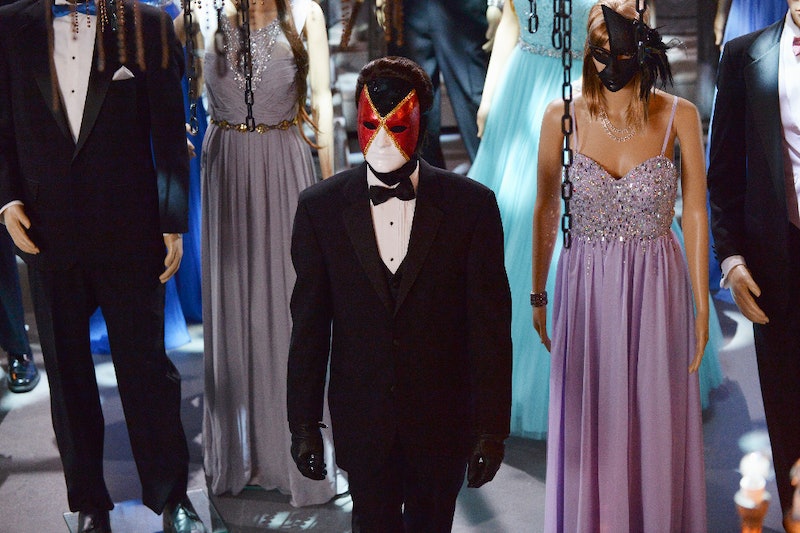 It's pretty natural that when Pretty Little Liars drops its Big A reveal after five seasons of wondering and searching for clues, fans lose their freaking minds. Charles "Big A" DiLaurentis has revealed himself (almost all the way, there is still the matter of what the face behind the mask looks like) and naturally theories about who Charles actually is abound. One theory, however is making the rounds and making me very worried as a Pretty Little Liars fan: Some fans are suggesting that Charles is transgender and that Charles' anger and torture of the Liars stems from Mr. DiLaurentis' staunch disapproval of the way he wanted to be identified as a child. Update: It appears that CeCe is Charles, which suggests that Pretty Little Liars did indeed include a transgender storyline. We will update as more details and a complete confirmation are available.

Earlier: A lot of these theories hinge on the flashback scene in which Mrs. DiLaurentis has two yellow dresses, one for Ali and one for... shhhh, don't tell your father! That, coupled with A's obsession with prom, dolls, and dollhouses and other things perceived to be things that girls prefer has led some fans to suggest that A is transgender and wants to be identified as a woman. Connections to A's fixation on Ali have led a few folks to suggest that A wanted to be Ali and some have even started to make the connection that Charles is actually CeCe, which would explain how A could have dressed as red coat and why CeCe would have befriended a much younger girl like Ali. Unfortunately, a lot of what is making it into the A is Transgender theory bin includes many gross misunderstandings of transgender people and experience.

Here's a taste of what folks have been saying:

First of all, Charles appears to identify as a man when he reveals himself to Spencer, so if Charles is indeed a transgender woman, we are headed for some precarious use of incorrect pronouns and have already seen quite a few. Especially if we consider Hanna's "He, she, it, bitch," outburst. I simply don't think I. Marlene King, who has worked hard as an advocate for the LGBT community, would be so careless with this sort of thing.

But mainly, there's the thematic issue, which is that A is a very deeply hurt person, lashing out and exhibiting what can definitely be defined as crazy behavior — no matter what happened to A in the past, what he or she is doing now is not OK (stalking, torturing, murdering, framing for murder, locking people up in a bunker/dollhouse and making them recreate prom with creepy mannequins are not sane behaviors). Something Tumblr user queenbeemonadilaurentis points out:

It would be a very tricky thing to make such a clearly unstable villain transgender and it would incredibly difficult for this show, or any show, to handle that writing challenge well.

If these fans have solved it, and A is transgender, here's hoping that Pretty Little Liars finds a way to do this storyline right.

Love Pretty Little Liars theories? Bustle's podcast loves them just as much as you do:

More like this
Every Horror Movie Reference In The 'PLL: Original Sin' Premiere
By Alyssa Lapid
The 'PLL: Original Sin' Creators Say A’s Identity Will Be “Very Clear” By The Season Finale
By Alyssa Lapid
‘Squid Game’ Creator Hwang Dong-Hyuk Just Dropped A Major Season 2 Tease
By Brian Anthony Hernandez and Bustle Editors
Everything To Know About 'Evil' Season 4
By Meguire Hennes
Get Even More From Bustle — Sign Up For The Newsletter