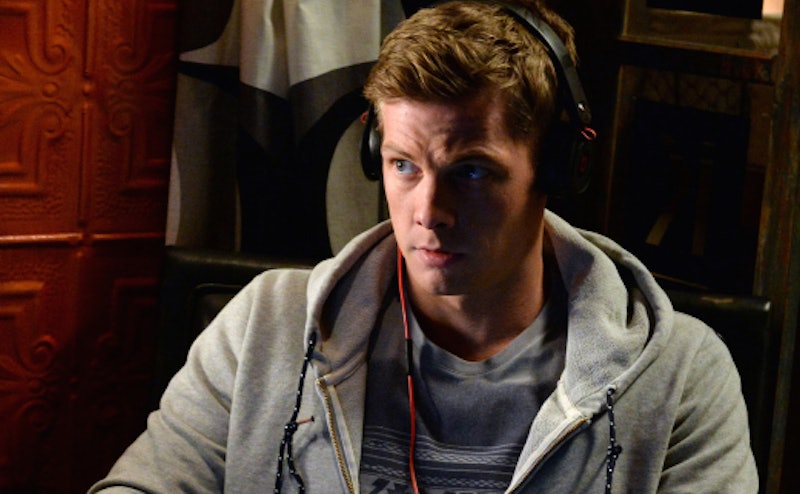 OK, OK. By now we've all recovered from the Pretty Little Liars Big A reveal, and by recovered, I mean our heart rates have slowed to a manageable rate. I daresay none of us will ever recover from that hell of an episode. We now know that Charles DiLaurentis is A, but we haven't yet seen who Charles actually is — fraternal twins are a thing, you know, and they don't look exactly the same. We did, however, get a shot of Andrew Campbell sitting at the brew tapping Mrs. Hastings' phone call about the missing liars. Suspicious much? It's certainly enough to get the Andrew is Charles is Big A theory rolling like a snowball down a hill. But Andrew's IT set-up wasn't the detail you missed. And the tiny bit of information is a lynchpin in the Andrew-Charles theory.

When Toby and Tanner reach A's lair, which is presumably connected, but not the actual location of the dollhouse that holds the Liars and Mona, they mention that it's located at Old Campbell Farm. Hello: Andrew Campbell, Campbell Farm. Red-freaking-flag.

Add to that, the video with Mrs. DiLaurentis and the twin boys at a farm where they're picking apples: If no one ever knew Jason had a twin, then clearly Charles had to be banished to another location — perhaps to a nice family who owns an apple farm and goes by the name of Campbell? And why might this A person be so bitter? Perhaps because he was banished to a foster family who clearly isn't around?

Plus, Keegan Allen told Bustle that the Big A Reveal will be "heartbreakingly beautiful" and wouldn't it be heartbreakingly beautiful to have A reveal to his half-sister (if Jason is Spencer's half brother, do the math) using the video of him visiting what would become his future home? It's leaving us no choice but to assume that Andrew is more involved that we think — just check out all of Bustle's theorizing on our podcast, "Taking This One To The Grave."

Of course, this does all seem a little easy. Andrew's little cut scene was clearly meant to set our brains off and giving us the Campbell farm could only send us down the line even further. But hey, it's been five long seasons of nearly unsolvable mysteries. Isn't it about time, on the night of the fated #BigAReveal that we get something a little easier to hang onto? Plus, I. Marlene King tweeted than many of us have already figured it out...

And in case you're thinking that Andrew would have been too far away at The Brew to get to Old Campbell Farm and through the secret tunnel we know must connect to the dollhouse (it exists, OK), check out the coordinates that Caleb found compared with the location of the real Pennsylvania town the writers based Rosewood on:

I've also allowed myself to muse on the theory that Charles actually killed Jason years ago and that he's been parading around as Jason this whole time and if that's the case, then maybe Andrew, as a Campbell of Old Campbell Farm, is Varjack and he's been facing off against A this whole time, but that is another theory for another day. Clearly this evening has thrown me into a downward spiral and it needs to stop if only for a moment.

Rest assured that Old Campbell Farm is going to be damn important.

And be sure to theorize along with us while listening to Bustle’s Pretty Little Liars podcast, “Taking This One To The Grave”:

More like this
These 25 International Horror Movies On Netflix Prove Fear Is A Universal Language
By Bustle Editors
Paul Mescal, Man Of Mystery
By Samantha Leach and Heather Hazzan
Mike Flanagan Teases 'The Midnight Club' In This Exclusive, Creepy Clip
By Grace Wehniainen
Caleb McLaughlin Details Racism From 'Stranger Things' Fans
By Radhika Menon
Get Even More From Bustle — Sign Up For The Newsletter