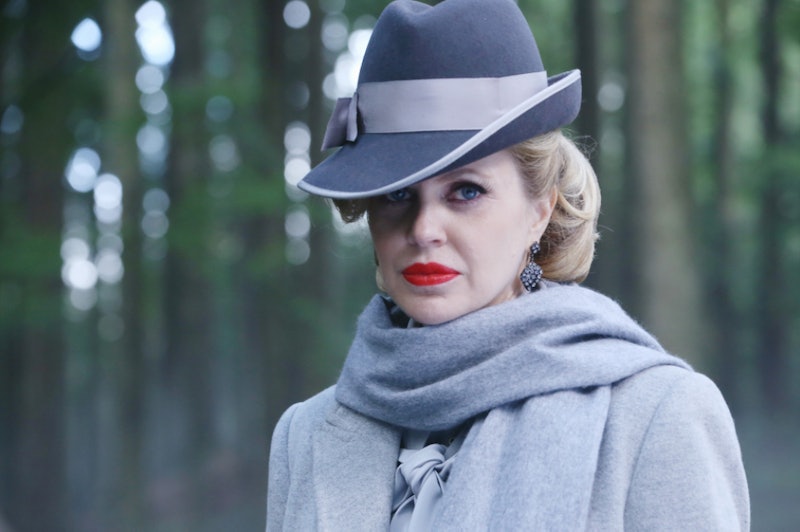 Once Upon a Time has doled out some very shocking plot twists throughout these past four seasons, but I think I may have found a reveal that would top them all. What if Emma is actually Maleficent's long lost daughter? I know, it's crazy, right? There's no way this could possibly be true. And yet… the more I think about it, the more curious I become about its validity. As we know, Snow and Charming have a secret on OUAT that they're determined to keep from everyone: the fact that they are the reason Maleficent lost her baby. However, given the rather vague use of the word "lost," I strongly believe that we'll eventually come to find out that Maleficent's child is still alive.

That by itself would serve as a massive surprise. But what if the OUAT writers have decided to up the ante even further by having Emma discover that Snow and Charming are not, in fact, her birth parents. I mean, is it really that unbelievable? (This coming from the same show that made Rumple's father Peter Pan.) After that, there's no telling what could possibly come out of Storybrooke's twisted family tree. Plus, you can't deny that Emma certainly looks a lot more like Maleficent than she does of either Snow or Charming. (Unless she's not actually a natural blonde. How often does Emma frequent Storybrooke's hair salon?)

Not to mention, it would also help explain why Emma has magical powers while both of her parents don't. (Who wants to bet she'll eventually learn how to morph into magical creatures, like say, oh I don't know, a dragon?) It'd be no wonder why Snow is so adamant about Emma never finding out the truth. She'd discover that her entire background has been one giant lie after the other. That's certainly a strong enough motivator to turn anyone evil — a dilemma we already know our beloved Savior will struggle with in the upcoming weeks.

Still feeling a bit skeptical about this whole thing? Executive producer Adam Horowitz himself recently divulged to Entertainment Weekly that there's way more to this whole Mal-Snow scandal than meets the eye and could end up changing the way you look at the series as a whole. "That’s the tip of the iceberg of the secret that you saw in the second episode," Horowitz shared. "Our hope is that by the time everything is revealed, you’ll see it really informs who they were in Season 1 when you met them for the first time."

But like any good OUAT prediction, my theory does come with its fair share of plot holes. For starters, we literally saw Snow give birth to Emma and place her in that magical closet all the way back in Season 1. How do you explain that if Emma's not really her daughter? It's simple, really: magic. Let's not forget that almost anything can be accomplished on this show due to the almighty power of magical sorcery. And according to Sunday night's episode synopsis for "Best Laid Plans," Snow and Charming enlist the help of "a hermit who gives them an opportunity to help their unborn child, but at a high cost." Gee, did you know that magic comes with a price? Where have I heard that before?

Adding further fuel to the fire is the fact that the promo shows said hermit warning the Charmings about their decision: "Once this spell has been enacted, it cannot be reversed." Cut to Snow and Charming running away from a pleading Maleficent as they carry away what appears to be none other than a dragon egg.

What if the spell somehow allowed their real, un-born daughter (let's call her Lily, shall we?) to switch places with the baby in the dragon egg (let's call her Emma). Then, technically, Snow really did give birth to Emma, even if she wasn't her actual daughter. Perhaps doing this was the only way to ensure their daughter's safety — to keep her far out of reach from those who could turn her to the dark side. (Not that it's any excuse, of course.) And it's not as if Snow and Charming didn't immediately love Emma as their own. We've seen firsthand how much they care about her. But you can't deny that promo makes them look mighty suspicious.

For all we know, once the egg hatched, the hermit took the baby to a human orphanage, where she eventually was placed in a good home, but never felt as though she belonged there. This caused her to run away and meet another nice, orphaned girl named Emma. And well, you know the rest. Maybe I'm crazy. Maybe it's a little too out of the realm of possibility and Lily is actually Mal's daughter, which — let's face it — seems like the more logical conclusion. But that's part of the beauty of a show like this. You never know what magic could help explain away.

And has anyone else noticed that Emma and Mal have yet to come face-to-face with each other so far? (Well, aside from Emma slaying her in her dragon form years back.) Is that being done intentionally? Would they somehow feel an unexplained connection toward each other? We should be able to find out the truth soon enough. But until then, I'm going to speculate until my heart's content. And if I'm wrong, I'm sure Mal will be the first to let me have it.