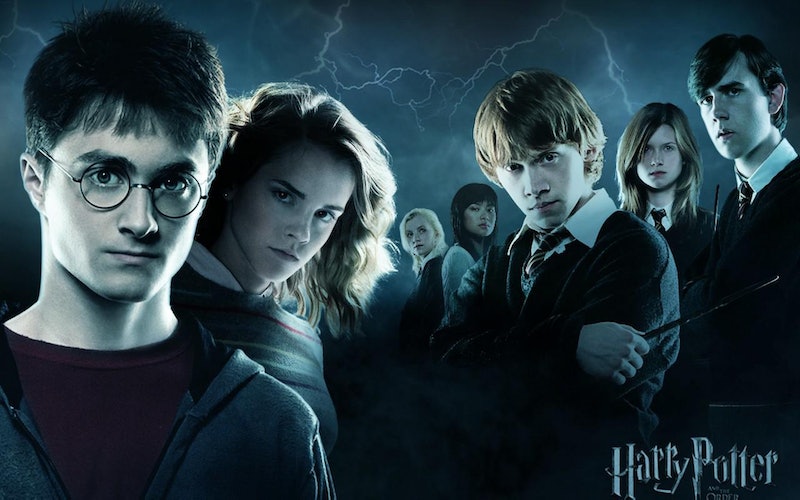 If you are anything like the average Harry Potter reader (which is to say, in possession of a heart and a brain and a soul), you probably think of your beloved Hogwarts students on a fairly regular basis. For me, Harry, Ron, Hermione, et. al. are almost like my own little literary Tamagotchi pets, on whom I feel the need to compulsively check, just to make sure they’re still alive and happy and fed on Butterbeer and stuff.

And in your deepest darkest fantasies, the wizarding world of Hogwarts’ best and brightest might extend into your own mundane world. My own mundane world has been shaped by New York University, where I attended as an undergrad and to which I’ll be returning in the fall for grad school (I’m a Fighting Violet lifer, apparently). In this fun and self-indulgent exercise, I’ve imagined what Harry, Ron, Hermione, Draco, and Luna’s experiences may have looked like if they'd been right at school with me. Even more demonically, I’ve imagined what they’d be like as zit-faced freshmen facing the Big Bad Purple-Flagged City, because this is my world and they’re just living in it and not all of us had broomsticks to fly away on, OK?

Harry has really come into his own since moving to New York. He’s an honors student in the Program in International Relations, which is an honors major, and he intends to focus on International Diplomacy, which he'll likely continue at NYU Law (he has a 10-year plan in play). At the moment, Harry is working on securing a place on Prof. Snape's coveted summer relief mission, an annual trip in which the acclaimed International Law professor carts a coterie of promising students to war-torn nations around the world.

You know what’s been the biggest thing for Harry, though? Punk rock saved his life. Those years of marginalization, of neglect, of living under the Dursley’s stairs (which, by the way, why didn’t anyone call Child Services about? This is one of the greatest outrages Harry can possibly conceive of, and for which he will exact studied revenge) has fueled in Harry a vicious angst that can only be expelled by the screech and madness of a three-minute hardcore jam. Harry wears his straight edge double-Xs proudly, refusing pulls from the tap at St. Vitus in favor of soda water and blue Gatorade. He's thinking of starting his own band — he already has the name, Hogsmeade's Finest — but he's not sure that he should blow his textbook money on a guitar, even a cheap one. He's already spent way too much on his tongue piercing at New York Adorned.

Ron Weasley is in love. Real, live, magical, grown-up love. Or it would be that kind of love, if Hermione'd had any idea that she was the apple of Ron’s bloodshot eye. But anyway, when he’s not lounging by the cracked-open window of his dorm room watching Workaholics and clutching his aching heart at the merest hint of a knock on the door (which usually turns out to be Neville Longbottom, looking to mooch either weed or a slice of Molly Weasley’s floor-famous lemon bundt cake off Ron), Ron can be found waiting on the panini line at Kimmel; choosing not to shove his way onto the broke-down elevators in Silver; and so, consequently, panting into his Computer Science classes at least 15 minutes late.

Much of Ron's time is also spent actively avoiding Cho Chang, because he feels really weird about hooking up with her during Welcome Week and then vomiting his guts out, which were blue for some reason, straight onto her pink paisley comforter. It's hard to avoid her because she lives literally next door, and actually she's Hermione's roommate, but, like, what's so bad about avoiding the elevator to take the eight flights of stairs, anyway?

After starting out as a Classics major in CAS (Honors Program, natch), Hermione soon understood that the College could not accommodate every single one of her proficiencies and intended areas of study, which included among them Gender and Sexuality Studies; Comp Lit; Public Policy; and Genetics. So Hermione transferred to Gallatin: a move that she’d intended to avoid, because if Hermione believes in anything it’s a traditional education, but which she’d also known would be inevitable, because if Hermione knows anything it’s herself. Her self-made concentration is called “International Letters, Genetic Influences on Political Ideologies, and the Philosophy of Gender.”

When not on the fourth floor of Bobst, in the fourth study carrel in the center aisle of the East wing, you can find Hermione firmly but politely correcting the study group she leads (it’s pronounced Ger-ta, but with Teutonic finesse) at Think Coffee each Wednesday, or else finding an excuse to knock on her neighbors’ door at Founders. She finds Harry a breath of fresh, mature air, and Ron sort of heartbreakingly hopeless. But it is endearing when he insists on using his dining dollars to buy her those Curry Chicken Salad wraps from Kimmel she likes so much.

Turns out not even Lucius could finagle his son’s way into Princeton, the Malfoy men’s alma mater. After Draco’s royal F-up, which involved thousands-worth of illegal substances, thousands-worth of fire damage, and unimaginable injury to the Malfoy name — and which got Draco booted out of Dalton — Draco should be kissing his father’s custom Zegna cuffs that he got his Scott Disick-wannabe son in anywhere.

Technically, Draco is pursuing a Business Degree at Stern, but mostly he pursues Amazonian models at Le Bain (which, yes, he knows has been fairly ruined by the bridge-and-tunnel crowd, but what can he say? He can’t resist a rooftop bar, and the Standard’s is a modern classic). He’s fallen in with a very sophisticated contingent of South American heiresses, some of whom live on the 10th floor at Founders, but most of whom are scattered throughout the high-rises of FiDi, where Draco himself lives and out of which he just might be running a highly lucrative downer dispensary catered to NYU’s vast stores of type-A’s and scene queens and tortured artists. Who says his Stern education is going to waste?

Luna Lovegood has quickly emerged as a darling at Tisch’s Experimental Theater Wing, which Luna finds so curious and wonderful, but really she just feels so blessed to be moving and dancing and performing and honing her craft in the company of such kind, dynamic spirits. Luna feels especially blessed to have been placed at ETW, which emphasizes freeing the actor’s spirit through the vehicle of the sublime body, because Xenophilius taught Luna from an early age to take the business of frolicking very seriously.

Luna also thinks she will minor in Creative Writing, because her first progression from last semester’s Writing the Essay class, an experimental treatise entitled “The Last Helping of Pudding: Fragments and Dreams of a Hopeless Zoologist,” was published in West 10th, the undergrad literary journal, which apparently is a very difficult thing to accomplish? At the moment, Luna is just focusing on her spring final, an integrative performance in which she intends to reach emotional ecstasy through the recitation of Sarah Kane's Skin whilst performing a rhythmic gymnastics routine. She is also nurturing a polyamorous relationship with Hannah Abbott and a young Medieval Studies professor who shall not be named.