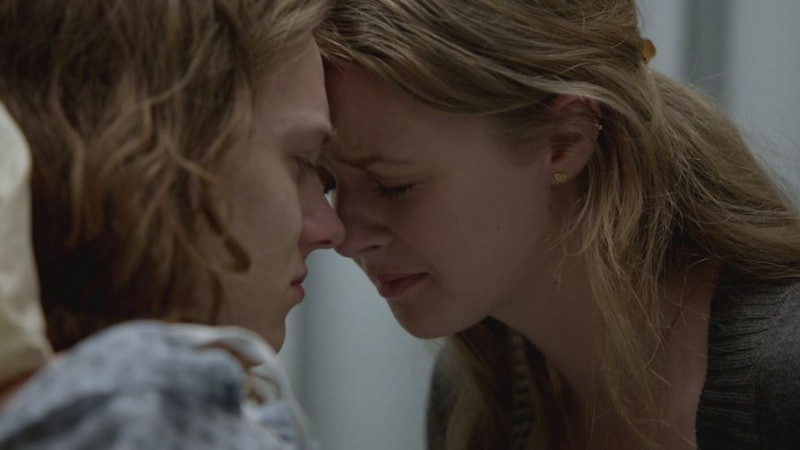 I adore Finding Carter — it's the perfect blend of family drama, mystery, and teen angst. But the biggest letdown of the epic season finale (in which Carter was kidnapped for the second time) was the conclusion of the romance between Carter's pal Max and her sister Taylor. Max and Taylor (lovingly referred to as Maxlor) began a sweet courtship midway through Season 1, and were so darn cute that it was often hard to pay attention to the trainwreck that was Carter's relationship with bad boy Crash. Then, disaster struck: Crash shot Max, and, instead of leaning on Taylor in his recovery process, Max decided to break up with her for... reasons. Cue the sobbing from fans everywhere.

Season 2 is fast approaching, and both Max and Taylor are regulars, so it's only a matter of time before they find their way back into one another's arms, right? Well, thanks to MTV's decision to release the first eight minutes of Finding Carter Season 2 online, we know that the time is... three minutes. Yep, it took exactly three minutes for MTV to make fans everywhere happy beyond belief, and I couldn't be more grateful to be a Maxlor 'shipper going into Season 2. Max and Taylor know right now that they should never be apart again, but just in case they ever need more reasons to stay together, here are a few.

It's Different With Taylor

Max is Carter's ex-boyfriend turned bestie, and while they're still close, Carter and Max just never had the same relationship as the Max does with Taylor. Sure, Max loves Carter, but it's clear that he never was in love with her the way he is with Taylor. Max wanted Carter as someone fun to hookup with, but he's willing to take things slow for Taylor.

Since the pilot, Max has gotten a job, his own place, AND knows how to spice a mean crouton. What's the common denominator here? Taylor. Obvs.

Taylor never felt like she really lived her life because of Carter's disappearance, and when Carter returned, she felt even more in the shadows. Then Taylor started dating Max, and things really turned around for her. She felt more confident because someone she loved believed in her. We can't give Max all the credit for Taylor's new confidence, but he's always ready to build her up.

They Have Their Own Language

I mean, come on — the whole "six reallys" thing? How freakin' adorable is that?!

They're Not Selfish With Each Other

Taylor put her life on hold to take care of Max. Max broke up with Taylor because he thought it would make her ultimately happier. Both love each other so much that they put aside their own needs to be with the other person — so just be with each other, damn it!