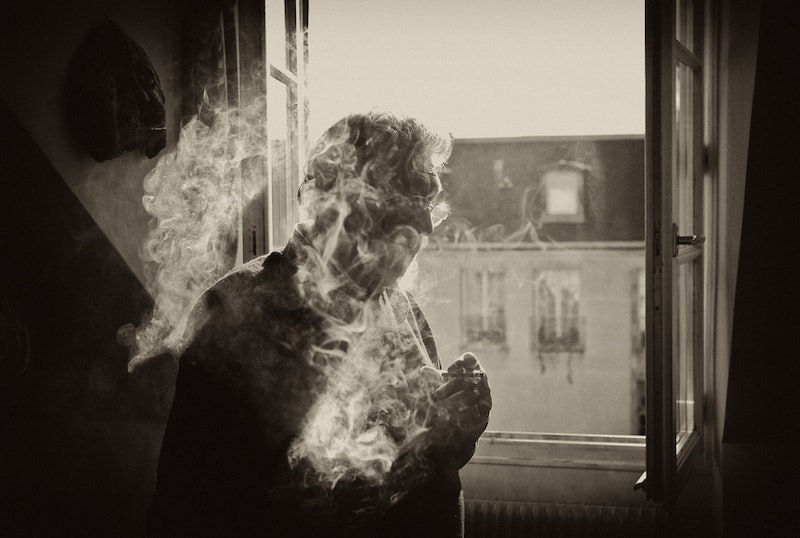 Look, if you’re a smoker, I’m not here to judge you. There are a lot of complicated reasons that people smoke, a big one being that nicotine is hella addictive, making it hard to stop even when you want to. But I think an important change has occurred in terms of our collective societal attitude about smoking: It's not cool anymore. I mean it. I don't think it's cool at all anymore, and I think most people of most ages would agree. Again, not even here to hate on smokers right now. The point I’m trying to make is simply that our culture has experienced a sea change in its attitude about smoking in the last few decides, one that is highly beneficial to society as a whole. Once a sign of class and glamour, smoking is no longer sexy or cool or even normal.

This shift in public perception is important because perception—and the social pressure that goes along with it—have the power to alter behavior. With almost 44 million people still smoking in the United States, the fight to end smoking—which happens to be the number one cause of preventable death in the country—is far from over. But when the poster boy in our collective mind's eye for contemporary tobacco is that creepy old homeless guy on the corner and not Don Draper or the Marlboro Man, we know we’ve turned a corner.

There are lots of reasons to stop smoking: In addition to the well-known fact that smoking is absolutely terrible for your health, smoking is expensive, it accelerates the signs of aging, it yellows your teeth, it increases your likelihood of being rejected on online-dating apps, and it’s generally gross and unpleasant. These deterrents have had a major effect on smoking in the United States: Fifty years ago, 42 percent of the US population smoked; last year that number was down to 19 percent. The decline in American smoking isn’t only due to a greater public understanding of the health risks of tobacco; a major factor has been that smoking is simply increasingly less socially accepted than it once was. Whereas smoking used to be the norm for most people and spaces, now the places one can smoke are heavily policed and non-smokers—a large majority—are a lot more vocal about their disapproval. Frankly, given all of the public pressure against it, smoking now just seems...sort of weird.

You might recognize these types of people. They, I now believe, are the only rarities who still think smoking is cool:

1. Teenagers, aka People Whose Brains Are Not Yet Fully Formed (Or At Least That’s The Excuse I’m Giving Them)

When I taught freshman composition classes at a state university, there was something I noticed about first semester freshmen particularly: They would all hang outside the classroom and smoke until right before the bell rang (so the whole classroom would smell terrible. Thanks, kids). I never had this happen in classes with older students; even freshmen in their second semester were less likely to hang out outside the classroom doors with their cigarettes in hand. Of course, this situation is entirely anecdotal (maybe my more advanced students preferred to smoke outside other classrooms, I dunno), but here’s my theory about why this happened: I think that these students, 18 years old and away from home for the first time, thought that smoking was simply what college students did, and so they would pose outside the classroom with their cancer sticks, trying to look like they weren’t only 3 months out of high school. By the end of their first year, they figured out that nobody in college thought cigarettes were cool, and that, although lots of university students certainly do smoke, they don’t parade it around like it’s something to be proud of. Some teenagers naturally gravitate toward things that they think will make them seem grown up—booze, skimpy clothes, cigarettes—but they’ll realize when they get out into the real world that smoking doesn’t actually make them look adult, but rather makes them look stupid.

According to the CDC, people over the age of 65 smoke significantly less than younger people (8.8 percent of older people smoke, as opposed to 20% of people between 18 and 64). But we all know that old person—stubborn, feisty, old fashioned—who smokes like a chimney and who will never, ever quit. Who wants to emulate that? Pretty much no one.

3. People Who Think Of Themselves As Rebels

OK, so smoking might not be cool, but that doesn't mean that some people don't still erroneously think they're being cool when they smoke. Like, THEY think they look cool—but that's it. No one else does. Some people thrive on being rebels, and what’s more rebellious in our smoke-intolerant society than lighting up a cigarette in a public place? I mean, listen, you’re not James Dean—there have got to be better ways to stick it to the man than to subject innocent bystanders to second-hand smoke while shoveling your money to Big Tobacco.

4. People Who Have Fantasies About Being Beat Generation Creative Heroes

I’m sorry. Smoking does not make you Jack Kerouac. If you must, go put on some ironically large plastic glasses and go for a road trip. You can still role play your creative heroes without all the health damage. And again, it's still not cool. People think the Beat Generation poets are cool—they think people who try to act like them are pretentious morons.

5. People Who Want To Look Like Old Hollywood Royalty

I’ll admit it: Humphrey Bogart looks cool when he smokes. So do Cary Grant, Lauren Bacall, Marilyn Monroe, Marlon Brando, and Clark Gable. Their secret? Black and white film. The white plumes of smoke look cool floating across the gray screen. They just do. In real life? NOPE. In real life, those people would've smelled bad and gotten a lot of early wrinkles. It's the same as with the Beat-wannabes: People who try to channel that whole Old Hollywood vibe just end up looking kinda lame and rough.

Smoking rates decrease as people work their way up the educational ladder. The CDC reports that more than 41 percent of people with a GED smoke; in contrast, 9.1 percent of those with undergraduate degrees and 5.6 percent of those with graduate degrees smoke. Why the discrepancy? Obviously, you don’t have to have a PhD to know that smoking is bad for you. But lower education correlates with lower income, and income is a major factor in determining who smokes and who doesn’t. Which brings us to...

Over 29 percent of people living below the poverty line smoke; in comparison, just over 16 percent of people who live over the line smoke. The reasons that smoking is more common among the poor are complicated and depressing. Stress due to economic insecurity—and thus to home instability, hunger, and a host of other incredibly difficult things—can lead people to cigarettes, which provide a needed, if transitory, comfort. What is incredibly frustrating is that those in poverty are specifically encouraged to smoke by Big Tobacco. Megan Sandel and Renée Boynton-Jarrett report to CNN that tobacco companies target low-income neighborhoods with increased advertising; these neighborhoods get larger signs, triple the number of brand ads, and cheaper cigarettes than their more affluent counterparts. Poor people also have fewer financial and social resources available when trying to quit smoking than wealthier people. The world is horrible.

8. People Who Are Legitimately Cool But Who Smoke For Reasons You Don’t Really Understand

We all know that person—the one who is super cool, smart, funny, and considerate. She drinks kale smoothies and does yoga, and she still sneaks off for a cigarette every time you hang out. And you’re not judging—this person (like all of the people on this list) has her own reasons for smoking, and she has the right to make decisions about her life and health—but you find it strange that she lights up, and you can tell that even she thinks it’s strange. The fact that you both see the smoking as an aberration is important and ultimately good—it’s a sign that we are inexorably, if slowly, moving toward a society in which smoking isn’t simply unusual—it’s nonexistent. Like I said, smoking isn't cool anymore. Even the few cool people who happen to be hanging onto the habit know it.