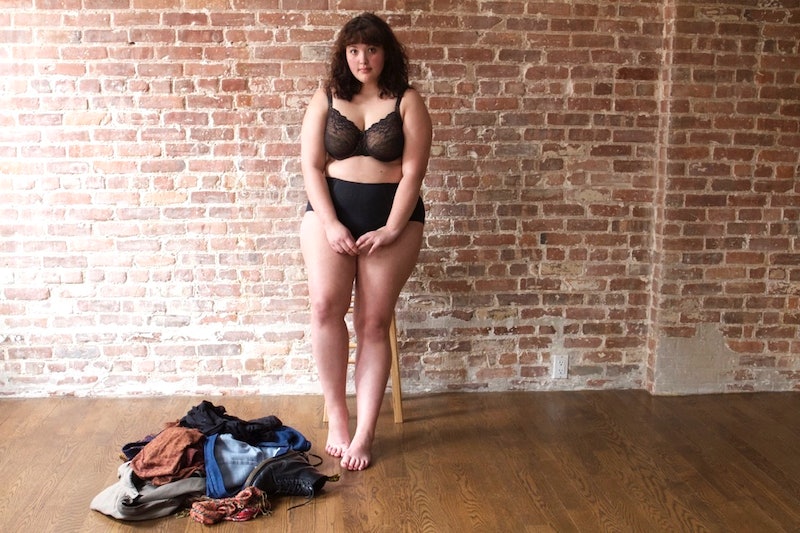 Since 2009, StyleLikeU's multimedia platform — one that encompasses everything from photography to books to documentary — has been personifying the very core of movements in body positivity and size acceptance. Founded by mother/daughter team Elisa Goodkind and Lily Mandelbaum, their What's Underneath Project is, as its name suggests, an effort to showcase what's underneath all the baggage — what's underneath a human being when stripped of body hate, of social stigma, of fat shaming, of self-loathing.

At the end of the day, all of StyleLikeU's work is rooted in combatting the "increasingly soulless fashion world of unattainable imagery and big brand homogeneity," in the aid of making "a culture where people are honored for their differences and connected through personal, universal truths" more attainable. Suffice it to say, their mantra is one I resonate with on nothing short of a spiritual level. So when I was asked to participate in their web series to discuss my relationship with body image, fatness and the size acceptance movement, I simply couldn't not.

Taking off your clothes is a hugely personal thing — no matter how comfortable or uncomfortable you are with the act itself. But when done by your own will — by your own desire to allow a fellow human being (or several) to see you in what could be classed as your "purest" state — it can be hugely satisfying. And yet, it's an act riddled by self-deprecation, because we're not taught to love our bodies in their "purest" of states. We're taught to pick them apart, analyze (and criticize) every detail, poke at any stretch mark, and execute a plan of action. A plan of change. And so, Elisa and Lily's What's Underneath videos strip people down to the bare minimum — no makeup; very little clothing — to desensitize us. To present us with bodies as they are, in all their imperfect perfection; to normalize the visibility of varying forms of beauty.

(Before the clothes came off.)

It wasn't until my early twenties that I was able to look in the mirror and see something that was not "grotesque." The irony is that as an adolescent, I spent several years looking much like the primary image we're told is beautiful: I was tall and fair-skinned. I wore a size 6 at 5'10". I'd gotten there by crash dieting and risking my actual health, sure, but I was there. I was at this weird place — one that I'd been told would make me happy and beautiful and successful. But all I saw was imperfection. My stomach wasn't toned enough, I still had some leftover cellulite on my thighs, my cheeks could've done with being less chubby. It didn't matter that you could see my ribs or that my collarbone stuck out or that I could wrap my fingers around my ankle — my body still, somehow, felt "wrong."

Fast forward the clock to now: My body isn't what mainstream beauty constructs would define as "beautiful." I wear a size 16/18 (U.S.), my individual thigh is the size of my boyfriend's body, and my arms are soft and squashy. Yet, through something of a psychological evolution — a slow process aided by plus-size bloggers, body positivity activists (StyleLikeU included), long periods of time spent far away from the states, and a partner passionate about size acceptance — my relationship with my body changed. My ability to see things about it that had previously brought me to tears as beautiful was solidified. Taking off my clothing (be it in front of a mirror, at the beach, or with my partner beside me) began to create a sense of freedom and independence and rebellion and self-love. And I guess that's what I wanted to showcase by teaming up with Elisa and Lily.

(After the clothes came off, obvs.)

Many of us are able to accept that beauty isn't a size. We're able to see those around us with differences to our own selves as lovely and exquisite. We're able to consider varying body types or styles intriguing and lovely. But applying these notions to one's own self is nowhere near as simple. Our logic all but disappears, and we're left with the self-doubt ingrained from childhood and on. But it doesn't have to be that way.

If pioneers of the simple idea of "beauty at every size, color and style" continue to work at this kind of acceptance, perhaps one day it won't feel "brave" or "revolutionary" to do something as seemingly benign as wear a lingerie set in the bedroom or a string bikini to the beach, when at a larger size. Perhaps such acts will be normalized. But for now, they are an act of necessary rebellion. When so many people are still thrown off guard — shocked and confused — by seeing plus-size women flaunt their bodies in something other than a baggy tee and sweatpants, it becomes even more important to do so. Maybe we need to keep shocking people, until said shock wears off, and everyone can simply be allowed to exist — however they choose to lead that existence.