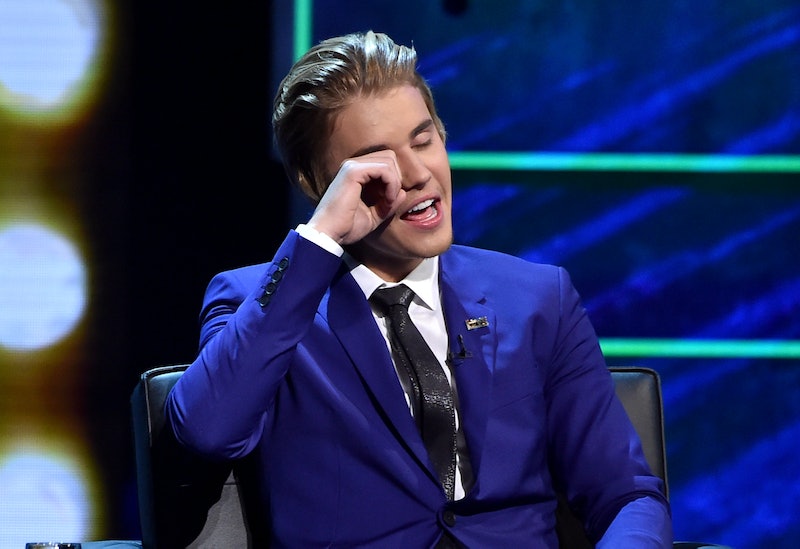 Roasts are not a place for the weak hearted. This stuff gets real. It gets insulting. It goes way, way too far. It crosses lines that just aren't OK (in fact, it crosses some lines so much so that Comedy Central had remove some Roast jokes that were in poor taste). The Roast of Justin Bieber is absolutely no exception — in fact it just might be the rule. Things got heated when the Biebs agreed to sit on a throne and let comedians and Martha Stewart sling arrows at him and anyone else in range. But if you missed the action and couldn't scramble your way to a Justin Bieber roast online stream, you can thank the good people of the internet for capturing every precious (disgusting, embarrassing, horrifying) bit of the Bieber roast in GIF form.

Of course, these can't fully deliver the absolute horror I'm sure we all felt when Martha started telling prison stories (look, I know she didn't write them and she was barely making her way through the teleprompter, but it was still a lot to handle) or the abject shock at Pete Davidson's Bill Cosby joke and the bit in which he used his father's death to take down his roast opponents. But hey, it'll do.

Here's what you missed:

Kevin Hart Asked Us To Belieb

Which is a word I was hoping wouldn't catch on. Damnit.

Justin Got To Be An Angel

You know, so his fans couldn't disagree with EVERYTHING that happened here tonight.

Justin Did This. A Lot.

It's his "I'm so down with all these jokes, can't you tell" stance.

Natasha Leggero Made This Interesting Observation

Martha will not let us forget that she went to prison. Ever.

Pete Davidson Made Us Feel Old

For having "Get Back" on any of our Spotify playlists.

Shaq Was Worried About Jesus' Proximity To The Biebs

We get it. You've never been to a roast before.

Jeff Ross Had The Daddiest Dad Joke That Ever Dad Joked

I'm pretty sure he stole that one from Drunk Uncle.

As if he'd be any other way.

But that Snoop joke was pretty OK I guess.

Luda Had To Draw The Line Somewhere

Like, a lot. She is a salty old broad and I salute that.

I Mean, Check Her Out

Bieber's Monkey Was The Talk Of The Roast

I thought we'd forgotten about the monkey he abandoned in Germany. I was wrong.

Justin Was Kinda Funny, I Guess

He made Jeff Ross do whatever that was, so I'll give him some points.

And Justin Was Reunited With The Love Of His Life