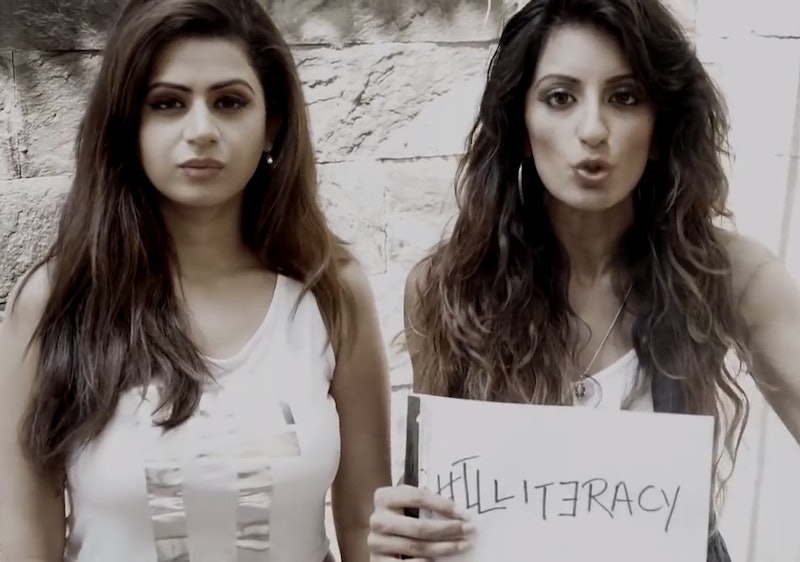 Artist Uppekha Jain and television host Pankhuri Awasthi have been making waves in their new video that uses rap to combat India's rape culture. The Mumbai-based "BomBaebs," as they refer to themselves on their YouTube channel, have racked up over 500,000 views as of Tuesday morning. The video also comes several days after the release of India's Daughter, a BBC documentary about Indian gang rape.

"I'm short, I'm fat, I'm tall, I'm skinny. I'll wear what I want, even if it's mini. It's only a dress, don't for a second think it's a 'yes,'" is just one of the many impactful lines from the three-minute video that calls out India's passivity when it comes to women's rights and safety.

"Rape and all these atrocities against women that are going on currently in our country is a topic of hot discussion right now," Jain said in a video interview for The Guardian, "So we said, let's be the voice for other women who might not be able to speak about it."

The frequency of sexually violent acts against women in India have made international headlines for the past few years. In 2012, a young woman was violently gang raped and murdered in Delhi, an event that made waves around the world and drew in a number of women's rights activists. Jain and Awasthi touch on this reputation with their opening line: "We're now known as the land of rapes, but did you ever wonder how this took shape?"

Jain and Awasthi also touch on several other issues, such as female infanticide. "It's not just the men, it's the women, too, that slaughter the girl child growing in their womb," they say. They also point out the hypocrisy of parents spending money on their daughter's wedding so that she can live with her husband rather than investing in an education that would allow their daughter to be self-sufficient: "Stop throwing bundles of money away at her wedding while the importance of her education you're conveniently forgetting."

The passion and tenacity that the two young women channel through their video will certainly spark many discussions about gender rights not just in India, but in patriarchal societies all over the world, including the U.S. One thing is for certain, Jain and Awasthi are courageous young women who do not shy away from calling out the patriarchy: "You need new heroes to idolize, it's time our society got more civilized. We won't be spectators to your misconduct, our free will is not up for you to abduct."