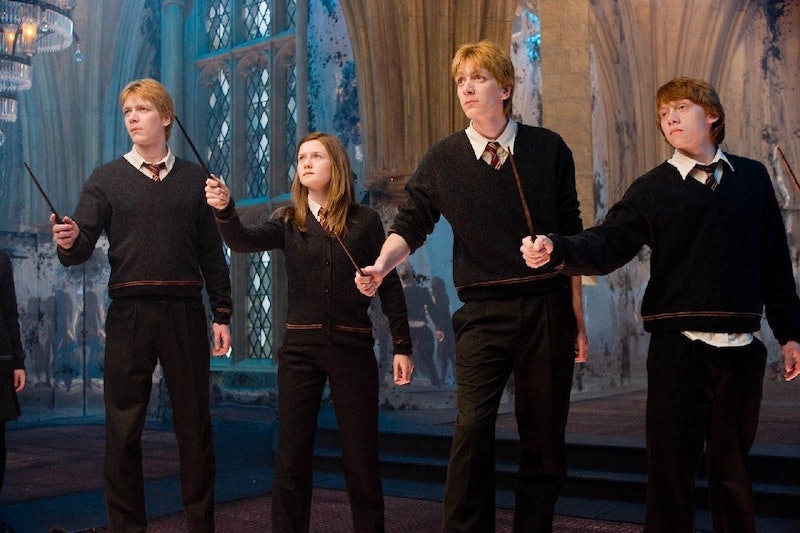 When you finished Harry Potter and the Goblet of Fire (when it came out that first time, I mean — because you know you've read it way more than once), you were probably in shock. I know I was. And, unfortunately, that feeling had staying power; now I had to wait, wait, and wait until the next book would be out. It seemed to take forever, and was painful. To get myself through, I stalked Web forums for theories, read the fan fiction, and played and the card game and boardgames. (Sound familiar?)

It's no exaggeration to say that the release date announcement for Harry Potter and the Order of the Phoenix left me grinning for a week. But then, of course, all we Potterheads had to wait to some more.

We were all speculating about what on earth The Order of the Phoenix could be. We were wondering how the hell this war, that was basically promised at the end of HP4, was going to start. Were Harry, Ron, and Hermione still going to go to Hogwarts? Was everything going to shut down? How was it possible that Harry would be at the Dursleys again for an entire summer? And then the book came out, and every theory I'd been hashing out with friends flew right out of my mind. I didn't care about guessing. I just wanted to plow through the book and feel these feels.

I knew this wasn't going to start out well. Harry listening to the news in secret? This can't be good. And then, of course, the whole fact of Dementors right around the corner of Privet Drive... yeah, things aren't off to a great beginning. Especially what with the Minister of Magic himself not believing that Voldemort has risen again. Harry is expelled for using magic and has to go to court. It's ridiculous.

At least there's this Order of the Phoenix thing, a sort of ragtag group of wizards and witches who save Harry from the Dursleys. Dumbledore, of course, helps Harry get back into Hogwarts. It's also pretty cool to see the Ministry of Magic for the first time.

So not only is the Ministry of Magic starting to send out weird decrees, but Dolores Umbridge, fluffy and pink and absolutely evil, is going to be the Defense Against the Dark Arts teacher? Well, at least we know she probably won't last, right? Still. She's a total biotch.

Umbridge is power-hungry, physically abusive, and scares the living daylights out of me. She takes everything Harry loves away from him, basically, from Hogsmeade to Quidditch, and there are stricter and stricter rules enforced on Hogwarts.

Thank goodness for Hermione and her good ideas. Thank goodness for Dobby and knowing about the Room of Requirement. Also, how awesome is Harry as a teacher? And how cool is it that they call themselves Dumbledore's Army? Dude, I'd fight for Dumbledore, especially if I had a wand. Wouldn't you?

Arthur Weasley was bitten by a snake and Harry was the snake and this is terrifying and really bad. Please be okay, Arthur, please, I don't want anyone else dead, not yet, I can't take it, Cedric was bad enough.

But what happened to Neville's parents certainly isn't. Poor guy. It's as if his parents have had Alzheimer's since he was barely a year old.

The whole Occlumancy lesson thing, Snape and Harry alone together, Dumbledore leaving (again! Like he did in CoS for a hot second!) is all overwhelming. And seeing the awful, mean bullies that Harry's dad and Sirius used to be? How mean they were to Snape? Yeah, it's not just depressing, it's disillusioning. I cried during that scene. A lot.

Umbridge reveals that she's the one who sent the Dementor after Harry during the summer, so basically she's at fault for half the stuff that's been going on and she's not even affiliated with the Death Eaters! She's just evil, not even a sycophant, which makes it worse. She totally deserves the way the Weasley twins screw Hogwarts up and the way Hermione gets rid of her by bringing her into the forest to be captured by centaurs.

Harry, Hermione, Ron, Ginny, Luna Lovegood (favorite new character, by the way) and Neville all fly on thestrals — invisible to anyone who hasn't seen someone dead) to the Ministry of Magic because Harry is convinced Sirius is there, and we're finally going to see the Department of Mysteries, which is seriously (no pun intended) the coolest thing ever, until everything gets really scary and the big battle for the prophecy regarding Harry and Voldemort begins.

I don't care that Harry and Cho didn't work out. I don't care that Ron and Hermione are still butting heads and not kissing yet. I don't care that everyone in the Department of Mysteries gets hurt. What I care about is Sirius, and Sirius literally falling beyond the vale, into death itself, with no body to mourn and cry over or bury or cremate. Nothing. He's gone. Eliminated. And Dumbledore tries to explain things to Harry and honestly, I don't care about that either. R.I.P. Sirius Black.