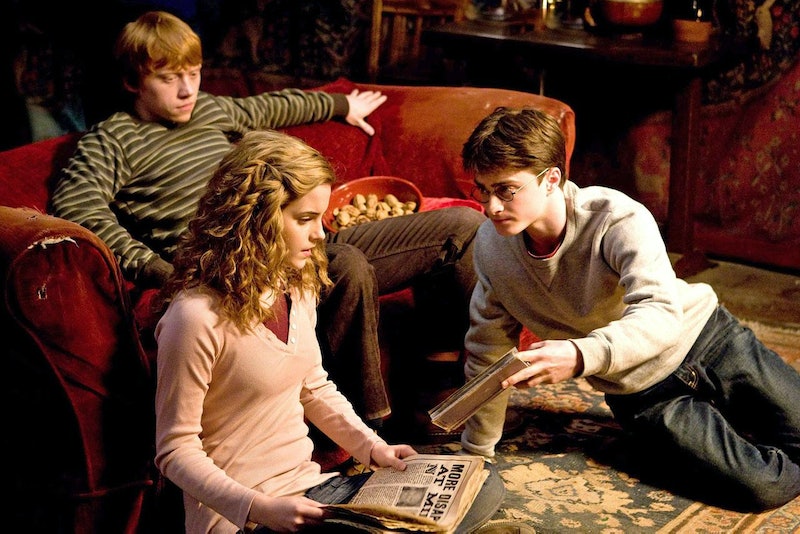 In 2005, it was time for Harry Potter and the Half-Blood Prince. The wait wasn't so bad... because we needed those two years to process the fact that the character we grew to love despite his early-years dickishness, Serius Black, was (and is) dead.

Waiting for HP6, we speculated rampantly, and were all so tense and nervous. Remember that not only did Serius die at the end of Harry Potter and the Order of the Phoenix, but also Voldemort appeared in the flesh, battled both Harry and Dumbledore, and then fled, so basically the entire wizarding world now knows that he is back and that this is war. Real war. Like the last time that Voldemort was in power, a lot of it is shady — you never know who to trust, who's under the Imperius Curse and basically doing things because they have to and who isn't... it's not a cold war, but it's also not entirely hot because there's a lot of stealthiness involved.

But knowing that all this was coming meant that when I got my hands on Harry Potter and the Half-Blood Prince (I got it while on a vacation the day it came out, and promptly began ignoring my family), I was scared just opening it. And when, again, I was greeted by an unexpected scene that didn't involve Harry, I knew I was in for some dark stuff and some stressful feelings. And that is, indeed, what I got.

Snape is talking to the Malfoys, who are now obviously not the cream of the crop anymore since they've been outed as Death Eaters. Whoops. But Snape making an unbreakable vow to help Malfoy? That's... rather creepy.

Dumbledore is finally close to Harry again, which is very nice to know, but he takes him on this wacky adventure to a house where a man named Horace Slughorn is posing as an armchair. I mean, what?

Being back at the Burrow is always good. Plus there's this whole tension thing happening with Harry and Ginny that's pretty subtle, but also adorable.

Snape is teaching Defense Against the Dark Arts. And Slughorn is teaching Potions? Well, at least that means we (*ahem* I mean, of course, THEY) don't have to dread Potions classes anymore.

I am so with Hermione with this whole old textbook belonging to someone called the Half-Blood Prince. I mean sure, OK, so Harry knows how to make potions perfectly now for the first time in forever, but still, books can be very dangerous in Hogwarts (they bite, they scream, they hold Tom Riddle inside of them... you know. The usual).

Dumbledore's private lessons with Harry are actually just an amazing plot device to get us to see past moments of Voldemort's life or those who were associated with him. Both, actually. So it's a walk down a psychological memory lane, trying to get Harry to understand Voldemort's psyche? Or a way to convince him that Voldy is a sociopath? Or is it supposed to teach him something else entirely?

Horcruxes! There's actually totally a way to destroy Voldemort! OK, yes, it involves lots of things that no one has yet, but Dumbledore has totally destroyed one and there are others out there, somewhere.

Hermione snogged Viktor Krum ages ago, so Ron starts making out everywhere with Lavender Brown, which is just, like, gross, get a room. Or at least a nook behind some suit of armor or something. Harry falls hard for Ginny, and finally they have a thing, which is super-adorbs. So cute I can't handle it.

Harry and Dumbledore are going somewhere. Together. And Harry is satisfied and happy about it because finally he gets to go on a real mission. Except that, well, there are only so many pages left until the end of the book so I'm rather freaked out.

The whole setup is terrifying. The inferi inside the lake, the potion and the locket at its bottom, and most of all, the way Dumbledore gets so incredibly weak. Lucky that Harry has learned to Apparate by now (and Disapparate) so he can get himself and Dumbldore the hell out of that cave. Also, this is where I realized that Voldemort really does have the tendencies of a sociopath — collecting trophies and leaving things at places where he'd hurt people before.

The Dark Mark is above Hogwarts and there are Death Eaters inside. Lots of them. Draco helped them get in, the little idiot. And now, now he has to kill Dumbledore. But instead, Snape does it — keeping his vow, how honorable – and they disappear.

For Dumbledore, for Bill who was hurt in battle, for Molly Weasley's assumption that Bill's fiancée Fleur (hot French girl from HP4, remember her?) won't want him because his face is all scarred, for Harry, for Snape's turn to the Dark Side. And grieving for the fact that Harry, Ron, and Hermione are not, cannot, and will never again be children.

Harry breaks up with Ginny and he, Hermione, and Ron decide they're not coming back to school again. They're not going to attend their last year at Hogwarts. They're going to head out and search for the Horcruxes and destroy Voldemort for good. How on earth is the next book going to work without the structure of Hogwarts to take us through it?

More like this
Harry Potter's Viktor Krum Has Undergone A Huge Transformation Since Hogwarts
By Sam Ramsden and Meguire Hennes
Nicola Coughlan Shared A Lady Whistledown Excerpt From ‘Bridgerton’ Season 3
By Grace Wehniainen, Alyssa Lapid and Sam Ramsden
Viserys’ Fate On 'House Of The Dragon' Could Differ From The Book In This Surprising Way
By Grace Wehniainen
Read The First Pages Of Emma Rosenblum’s Highly Anticipated Debut, 'Bad Summer People'
By Samantha Leach
Get Even More From Bustle — Sign Up For The Newsletter