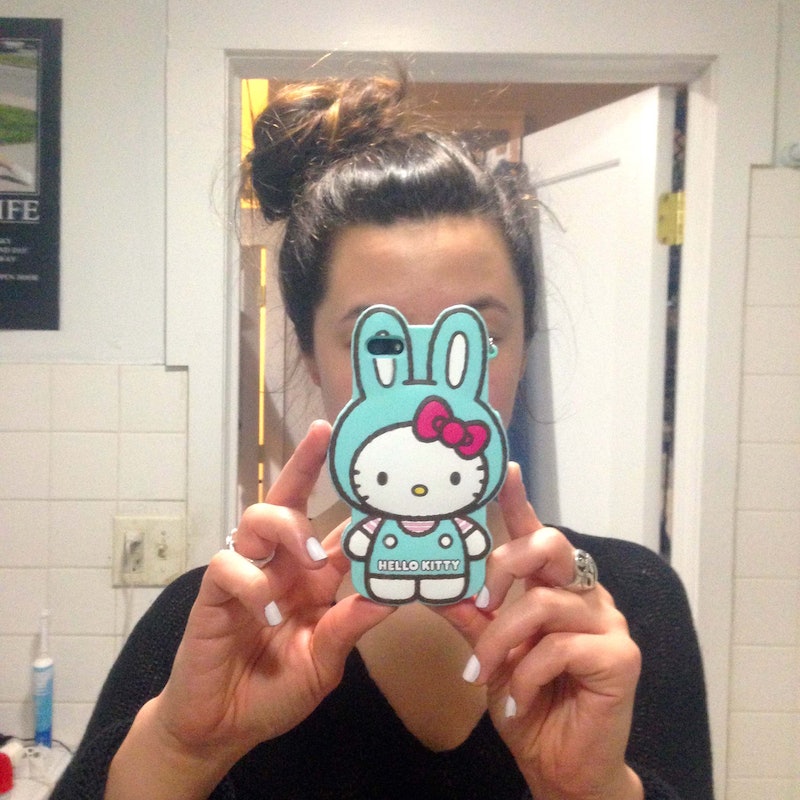 My iPhone case is not as high-end as a Moschino teddy bear phone case, but it's just as twee as anything designed by Jeremy Scott, and it is, hands down, my favorite accessory. I found this particular case while on vacation in Seoul. Everyone in South Korea has a cellphone (really, more than everyone has a cellphone in Korea. The penetration rate is over 100 percent, meaning that there's more than one mobile device for every individual) and colorful, cartoon smartphone cases are the norm, especially among high school and college-aged women, based on my totally unscientific survey. I'd be sitting on the subway across from a row of people, all of whom had cell phones out, many with brightly colored, rubber cases that made it look like the user was staring intently into a cartoon character's belly. There was something so simply delightful about looking over and watching grown-ups poke Winnie the Pooh's tummy, like a real-life Teletubby, even if I couldn't see what was going on on the screen.

It was hard not to get swept up in the trend because the cases all looked so adorable, and they were available everywhere featuring every character imaginable, including those Despicable Me Minions, which were inexplicably popular. For the rest of my vacation, I scoured markets and stores and subway stations, which are just as much underground mini-malls as working transit hubs that have stall after stall of snacks and cheap clothes and tech accessories.

I found my Hello Kitty case at Lotte World in southern Seoul, and as soon as I saw it, I knew it had to be mine. It's not just Hello Kitty, which is what made it so special and immediately stand out. It's Hello Kitty in a pink and white striped shirt, over which she's wearing what appears to be a baby blue bunny costume. The clincher was the gold heart charm, dangling from Hello Kitty's ear, delicately engraved with Hello Kitty's name and logo. It was undeniably adorable and sweet, and I needed to have it in my pocket at all times.

To be fair, this trend isn't uniquely Korean. There are many high-fashion phone cases available in the United States. This also isn't the first time I've gotten an ostentatious case for my phone. My current Hello Kitty phone case belongs to a long lineage of colorful cases, preceded by a knock-off Marc Jacobs French bulldog phone case, also purchased in Seoul, which was further preceded by a safety orange and RealTree camo print OtterBox. In college, I had a BlackBerry with a case featuring the pattern of Van Gogh's "Starry Night" on it, and an iPhone 4 covered with a technicolor psychedelic print.

But the rubber cartoon cases evoke a much more visceral reaction than any of the other colorful phone cases I've had, and the response to the Hello Kitty phone case has been the most vociferous by far. Hello Kitty's bunny ears, and sometimes red bow, poke out when I put my phone in my coat or blazer pocket, which piques others' interest. Then when I show them the case that features such an instantly recognizable and beloved character, they usually ask if it really is a Hello Kitty phone case, almost out of disbelief or to confirm what they're seeing is real, if I really am an adult with a real Hello Kitty phone case. More often than not, the comments are welcome, and it's been a great conversation starter at parties and bars and coffeeshops. My friendly, neighborhood barista saw my phone on the counter and literally swooned, which started a lovely chat in which I found out that we coincidentally lived in the same building.

For all the compliments I receive, I also get a lot of flak. The cartoon character phone cases have been gawked at by coworkers, commented on by bosses, and ridiculed by family members. I'll be at a meeting and place my phone on the table in front of me, and people will stare. The general criticism is along the lines of, "Isn't it a little immature? People won't take you seriously." But most people, especially in the office, don't say that directly. Instead, they look at my phone case, then look at me, then slowly say something that's polite on the surface but is clearly loaded with judgment: "That's... cute," or "That's... unique." Even my boyfriend, who I dragged around Seoul in my quest to find the perfect cartoon phone case, was skeptical about the choice, although he loves Hello Kitty as much, if not more, than I do.

I do understand the skepticism. Hello Kitty doesn't exactly scream "all grown up" and neither does a cartoon bulldog, especially when the alternative is a sleek black leather case. But I've never found that my phone case, of all the accessories that I wear or things that I carry, has been the thing that shoots my credibility as a professional. I would, in fact, argue it's the perfect accessory for someone who has to wear a black suit all the time. The business formal dress code at my workplace often makes me feel like my personality has been sucked away, and having this colorful phone case is a nod to who I am outside of this job. I smile when I see it. It's instantly recognizable as mine, and mine alone. No one else I've ever known or seen on the subway has this case, and there's something about the unique story behind it that feels so special. Best part might be that it definitely makes mirror selfies more interesting.

Yes, others make comments about my cartoon case, but at the end of the day, it doesn't matter. Here are some facts about me: I am a 23-year-old woman who graduated from college a semester early and pays for her own health insurance and holds a full-time salaried position and carries her iPhone 5 that she paid for herself in a rubber case shaped like Hello Kitty with a gold heart charm dangling off the right ear that looks like it should belong to a middle schooler. I can be mature and still have a sense of humor and a desire to surround myself with adorable, whimsical objects. These identities are not mutually incompatible, and my "childish" cartoon phone case doesn't mean that I'm incompetent. And hey, at least it's not a Hello Kitty tattoo (although there's really nothing wrong with those, either).