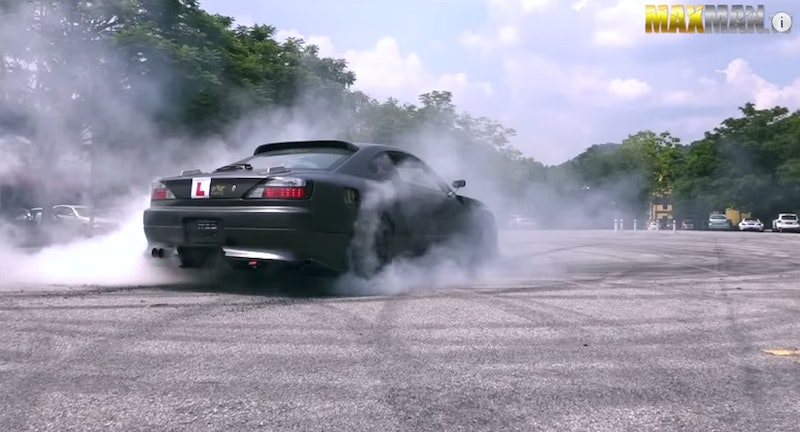 Dear all people who engaged in some April Fool's Day trickery this week: It's time to go home because we've reached peak pranking. Nothing, and I mean nothing, can top this video of "Girl Drifter" Leona Chin pranking new driving instructors on their first day of work. Buckle up, because you're in for a wild ride... although maybe not as wild as the one the instructors were put through.According to NPR, Leona Chin is a professional motorsports athlete who's competed in endurance races, circuit racing, and drifting, among many other events. Her Facebook page notes that she was a finalist for the Blue Chilli Award, is a MIREX Road Safety Ambassador, and has received a Fastest Woman Award in the past. Basically, Chin is the last person the driving instructors would feel unsafe with

— that is, if they knew who she was. Chin disguised herself for the prank, including pigtails, a dress emblazoned with Spongebob Squarepants, and thick glasses. Oh, and a giant teddy bear in the backseat of her "brother's" sports car, to add a little atmosphere.The transformation wasn't complete, however, until she began driving with the instructors. She managed to stall the car in first gear, accidentally turn the wipers on, turn the wrong, and generally give the impression of someone who needed a "little more practice," as one instructor gently suggested. Once each instructor was fed up with her antics, however, she did a complete 180... literally. Also a few figure eights, smoking the tires, and flawlessly parallel parking coming out of a circle (that one's in a separate video).

<img alt="amazing animated GIF " src="http://media.giphy.com/media/B3ETOq2MtxqOQ/giphy.gif" class="article-body-image" title="Image: http://media.giphy.com/media/B3ETOq2MtxqOQ/giphy.gif"/>The video, uploaded by Malaysia's MaxMan TV, concludes with the instructors hightailing it out of the car in various states of distress. They're all clearly relieved to find out it was a prank, although a few do seem to be reconsidering their career choices.There's a life lesson to be taken away here, which MaxMan handily included when they uploaded the video in the first place: "Do not underestimate women."