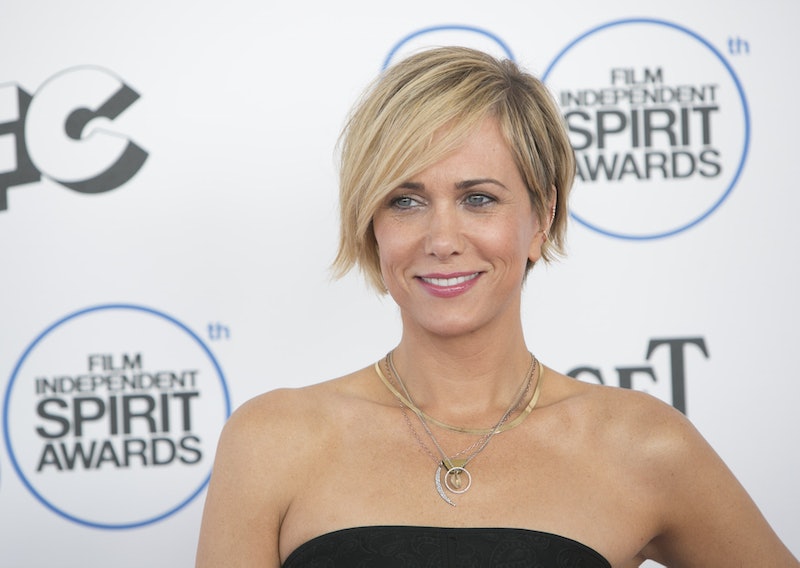 A collaboration between Kristen Wiig and Will Ferrell is already enough cause for celebration. But a collaboration between Kristen Wiig and Will Ferrell for a Lifetime Original Movie deserves a gosh dang parade, people! According to The Hollywood Reporter, the hilarious duo are teaming up with Adam McKay's production house to make A Deadly Adoption. In the made-for-television movie, Ferrell and Wiig play a wildly rich couple who take in a young pregnant woman (90210's Jessica Lowndes) in hopes of adopting her child. The film will be a VERY tongue-in-cheek nod to the genre and is being released for Lifetime's 25th anniversary.

(Update: According to a statement released by Ferrell himself and confirmed by Deadline, the project has now been scrapped as a result of reports about it's existence surfacing. From Deadline: "We are deeply disappointed that our planned top secret project was made public... Kristen and I have decided it is in the best interest for everyone to forego the project entirely, and we thank Lifetime and all the people who were ready to help us make this film."

As someone who was looking forward to this more than I look forward to cake on my birthday, THE GRIEF IS SO REAL.)

Since debuting Memories of Murder in 1990, Lifetime has given us a plethora of amazing, melodramatic TV movies featuring teenage pregnancy pacts and murderous babysitters. In short, Lifetime movies are the definition of guilty pleasure. Needless to say, I will be tuning into A Deadly Adoption with plenty of Franzia in tow. It's going to be a viewing party of epic proportions.

Even though Wiig and Ferrell are known for their fearless commitment to comedy, I have no doubt that it will translate beautifully into the Lifetime genre. Here's everything we can expect this summer from the off-the-wall insanity that is sure to be A Deadly Adoption:

A Lake House on Fire!

How else will the mother of the baby let them know that she is serious about their arrangement!?

Obviously the father of the unborn child is hot on their trail!

Obviously the birth mother is going to steal her own child from the maternity ward and put someone else's in the crib and leave in the dark of night. Obviously.

With babysitters, high school flames, and the quiet clerk at the town corner store.

They're all at the country club. If you golf and play tennis, but don't have a baby... YOU'RE OUT!

Someone will swoop in and save them all from this madness!

And all of the salacious secrets of this wealthy couple will be revealed and they will be destroyed! DESTROYED I SAY!