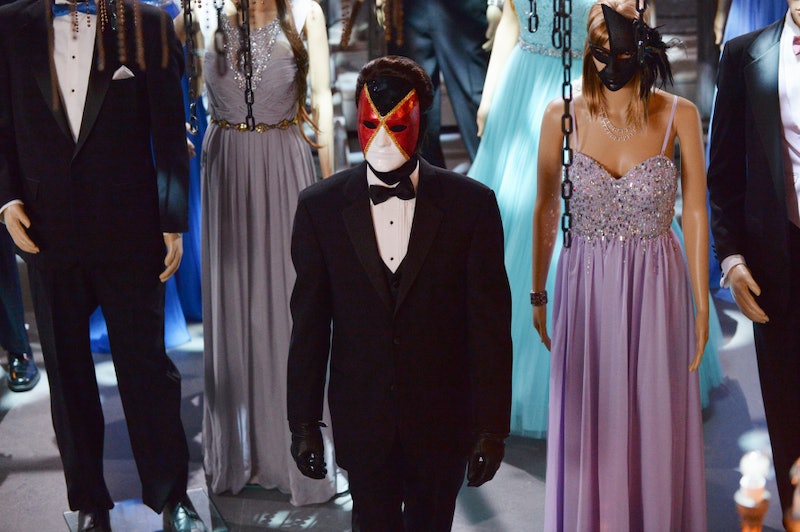 Now that fans have spent an entire night processing everything that happened during Pretty Little Liars' Season 5 finale, besides the Big A Reveal, some of the smaller clues we might've overlooked or missed entirely are rising to the forefront of Season 6 speculation — yes, it's already started. While we know Big A is Charles DiLaurentis, aka Jason's twin (barring yet another huge twist), we still have roughly a million questions for PLL, and luckily, it seems like the finale held more clues than we realized.

You may have picked up on the fact that when Caleb lead the Hastings and police to a farm, where the prison van involved in the girls' kidnapping was abandoned, Mrs. Hastings recognized it as the old Campbell Farm, where they used to take their kids apple picking. This is significant for a few reasons. 1) In the home video that revealed Charles is Jason's twin, the boys were picking apples. 2) Andrew's last name is Campbell, in case he wasn't suspicious enough already. 3) The farm, which appeared to be abandoned, also contained the lair ChArles was using to monitor the Liars in the dollhouse, and therefore couldn't have been too far from the dollhouse itself. Basically, the Campbell Farm is important, so we should learn everything we can about it, and that includes understanding the strange symbol affixed to a fence that PLL lingered on twice. Twice!

Obviously, that wasn't an accident. When the team of people searching for the Liars first arrived at the farm, the camera quickly zoomed in on the symbol, and the home video Spencer found of Mrs. DiLaurentis and her three (three!) children also lingered on the image, as shown above. Of course, this was likely a way to establish that the Campbell farm is where the home video took place, but I think there was more to it. If that was the shots' only purpose, why not just zoom on a sign that simply read, "Campbell Farm"? This very unique symbol must have a deeper meaning, and I think it connects to the Season 3 PLL finale, "A DAngerous GAme."

Immediately lending credence to this theory is I. Marlene King's recent interview with E!, in which she suggested five episodes for fans to rewatch if they wanted clues about the Big A Reveal. One of those episodes was "A DAngerous GAme." That is the big episode in which we finally learn that Alison is definitely still alive, as she pulls Hanna out of a lodge that someone lit on fire, and someone else pulled everyone else out. It's not clear if Big A pulled everyone else out, set the fire himself, or both, but Mona firmly believed that Big A would be at the lodge that night.

At one point, Toby is in the woods when he sees a girl in a black hoodie but before he can get a clear look at her face, someone knocks him out and throws a lighter on the ground next to him. On the lighter is a compass rose, with Northwest emphasized.

If you take a closer look at the symbol from Campbell Farm, it appears to contain a compass rose in the center, with the two peacocks' tails partially obscuring the shorter points. Could the two symbols be connected? If Big A, who we can officially call Charles, was really at the lodge that night, he could've planted that specific lighter, featuring a symbol with special meaning to him, on Toby, or had one of his helpers do it.

As for the significance of the peacocks, they haven't made an appearance in any other PLL episode yet, but I'm going to keep that Campbell Farm symbol handy when Season 6 premieres. I don't think "Welcome To The Dollhouse" marked its last appearance. For more Charles theories, check out Bustle's Pretty Little Liars podcast below.