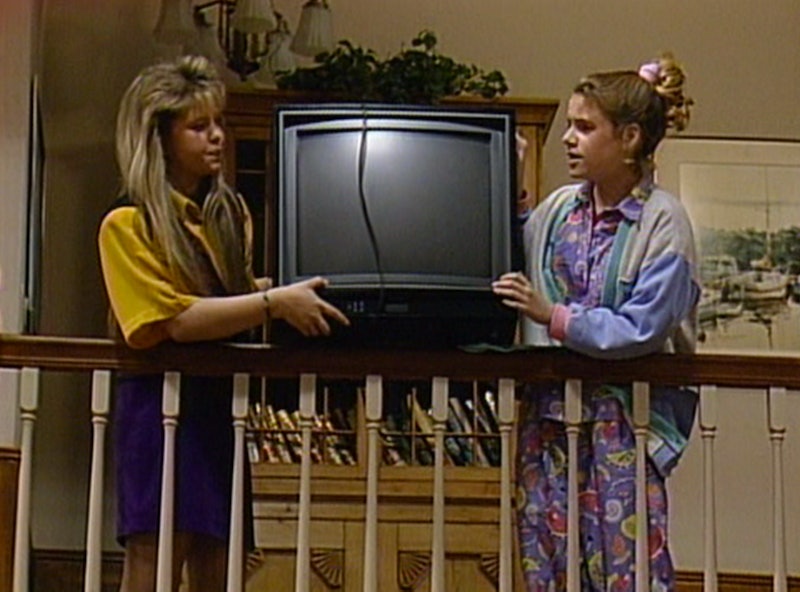 Get ready for the return of the milkman, the paperboy, and evening TV: Netflix allegedly ordered 13 episodes of Fuller House , a Full House spinoff. (The WB and Netflix have declined to confirm whether or not Fuller House is actually in the works.) According to TVLine's sources, the show will star Candace Cameron-Bure and Andrea Barber, aka best friends forever D.J. Tanner and Kimmy Gibbler. Look, if this spinoff isn’t for real, I’m going to shake my fist at the Internet, yell "HOW RUDE", and demand an apology. I’ll feel very betrayed. But say it is for real. Say a D.J. and Kimmy show is heading to Netflix. If it is real, I hope it lasts longer than 13 episodes.

I might be putting the ox before the wagon (I guess that's supposed to be a Oregon Trail reference? Hey, it's relevant. Because, uh, D.J and Kimmy were children of the '80s and '90s? Eh, it works. I'd be willing to wager those two forded rivers, caulked wagons, and battled jaundice like the rest of us), but something tells me one season won't be enough. Here are a few reasons why Fuller House should get more than 13 episodes:

The more Full House, the better

It’s been 20 years since the final season of Full House aired, and yes, I miss the Tanners. Sure, I can watch Full House reruns until Michelle’s horse comes home, but I wouldn’t be mad if a few new episodes were thrown into the mix. And by "few", I mean "more than 13". NEED MOAR D.J. AND KIMMY.

There's too much to get caught up on

Like I said, it's been 20 years. There's a crazy amount of ground to cover. I want to know what EVERYBODY has been up to for the past two decades. A quick sentence about the current state of Uncle Joey's stand-up career won't suffice. I want ALL of the deets. Will 13 episodes be enough time to cover all of the deets? DOUBT IT.

Not only are Kimmy and D.J. two of the best besties that've ever been on TV, but Cameron-Bure and Barber are IRL buddies. There is very little that can beat the onscreen chemistry of real-life pals. (See: Playing House, Best Friends Forever, and Broad City.) Don't yank this show away from us so quickly!

A big YES to complex, realistic female friendships on television. Again, don't yank this show away from us so quickly!

I don't want to sound ungrateful, but kicking it again with beloved characters Kimmy and D.J. for ONE season would be like getting to eat only two Thin Mints before every box of the popular Girl Scout cookie on the planet disappeared for good. It wouldn't be enough.