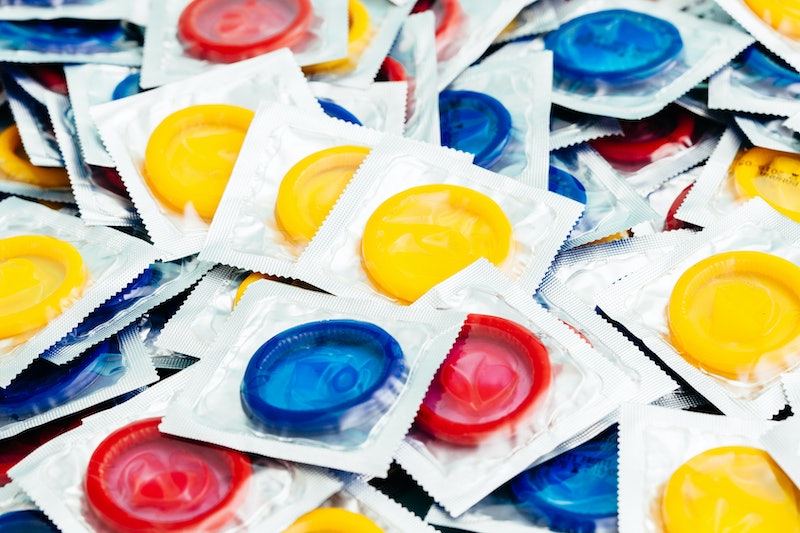 For us 21st century girls, sex and STDs unfortunately go hand in hand. And since April is STD Awareness Month, it's the perfect time to fill in the gaps in your knowledge before embarking on your next conquest. I'm still frequently surprised by what my friends and I don't know (or conveniently forget) about sexually transmitted diseases, or infections, or whatever you want to call them. Growing up in the 90's, we had Salt-N-Pepa, TLC, and MTV to teach us about safe sex in creative ways, but there's just nothing quite like that happening today. Granted, there is something called the Internet where you can learn way more about HIV than "Waterfalls" can teach you, but still, I don't see as many fun PSAs about condoms as I used to.

Safe sex goes far beyond condoms, however, which is a major point to make before any discussion of STDs. Saying condoms prevent STDs is kinda like saying seatbelts prevent car wrecks. It's an important step, but there are so many others to keep you and your partners safe — whether you're living with an STD or trying to avoid getting one altogether. Here are six things about STDs you might not know.

1. A pelvic exam or pap smear doesn't include an STD screening

Don't ask me why, but a pelvic exam or pap smear doesn't automatically include an STD screening. This additional testing might cost you extra (unless you have good healthcare), but take it from someone who pays out of pocket, it's still well worth it! Thankfully, there are also plenty of free and low cost clinics who will screen you, too. Just do an online search and you'll likely find one nearby.

2. You can have an STD without having any symptoms

Health class taught us to beware of itching, burning sensations, and visible lesions as far as STDs go. It's a total bummer, but certain viruses and infections are way more stealthy than that, like herpes, HPV, gonorrhea, and chlamydia, which may never manifest in noticeable symptoms at all, but can cause a host of health problems down the line. So just because you don't have symptoms doesn't mean you don't need to get tested.

3. You can transmit an STD without having any symptoms

The logic goes that if you can have an STD without symptoms, that means you can transmit one without having symptoms, too. This is particularly bad news, since the cycle of infection can go on for years if you don't get tested. Do all your future partners a favor and get tested early and often for this reason alone.

4. Condoms don't protect against all STDs

Herpes and HPV can both be spread through skin-to-skin contact, so a condom can't protect you 100 percent. That said, condoms are still crucial, and will greatly reduce your risk for other STDs, so keep on wrapping it up.

5. It's easier for women to be infected by men than vice versa

This is totally not fair, but apparently diseases do discriminate. Women are more likely to be infected by a man than vice versa, but this fact shouldn't give guys or queer ladies a pass to have at it with impunity. No one is immune to STDs, after all.

6. There are lots of STDs you've never heard of

I hate to be the bearer of bad news yet again, but the STDs in the spotlight aren't the only ones to worry about. There are plenty of other lesser-known sexually transmitted infections you should read up on that are quite common. Aren't bodies fun? Just remember that a simple trip to your doctor or clinic can help you test for and treat all of them. Not all STDs are curable, but 100 percent of STDs are now treatable, thanks to modern medicine.

7. You are more likely to catch an STD when you have your period

While I am fully supportive of period sex, it's important that you don't use it as an excuse to go condom free. Aside from the fact that you CAN get pregnant while you're menstruating, you should also know that you are more susceptible to contracting STD while on your period. Dr. Laura Berman tells Everyday Health that this is because "the cervix opens to allow blood to pass through. Unfortunately, this creates the perfect pathway for bacteria to travel deep inside the pelvic cavity."

The moral of the story? Use protection.