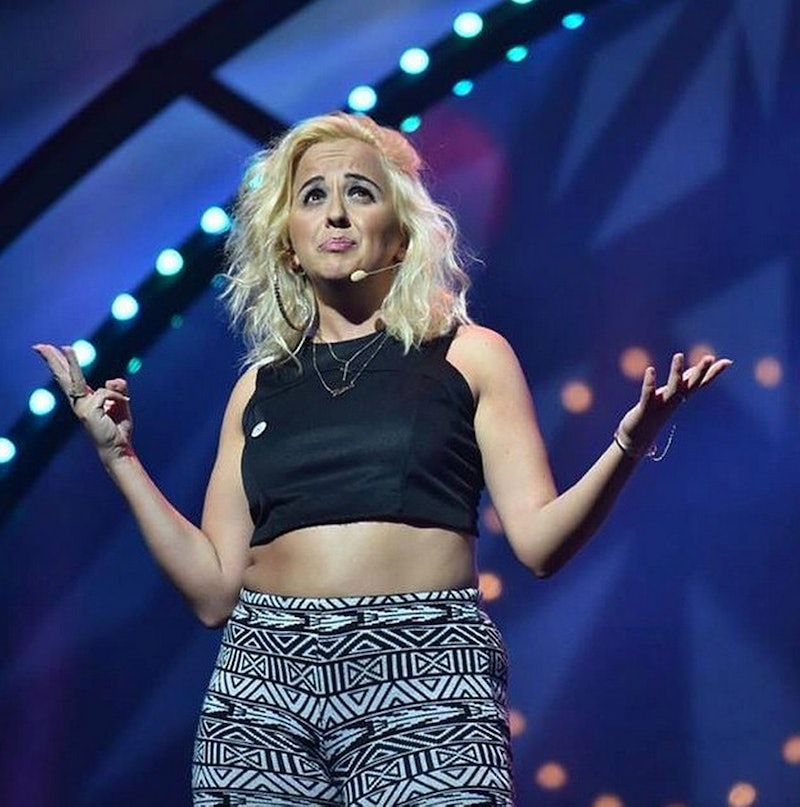 British comedian Luisa Omielan first made waves in 2012 when her breakthrough stand up show What Would Beyoncé Do?! exploded out of a little stage above a pub at the Edinburgh Festival Fringe. Then her follow-up solo show Am I Right Ladies? was an absolute game-changer. She went from up-and-comer to bonafide star comedian — gracing issues of UK Vogue, In Style and recently a full spread in The Sunday Times . Oh, she's also got a book deal for What Would Beyoncé Do?! coming out in Spring 2016. Until this weekend, Luisa was a sensation mostly in the UK and Europe. Now that her video about thigh gaps and female body issues has gone viral, with nearly 8 million views on Facebook, it seems like the whole world is finally getting to know Luisa Omielan.

Appearing at the Melbourne International Comedy Festival, Luisa takes the stage and delivers three minutes of some of the most relatable, honest, and empowering comedy that's out there right now. She rips right into society's judgement of the female body and everyone's obsession with telling you how much they ran that day right before you're about to enjoy a burger. She then proudly grabs hold of her stomach and asks, "What makes you think I don't like this? I love this. I LOVE this...oh, I love this. Do you know what this means? This means I go out for dinner with friends. This is my present to myself." When there is so much guilt surrounding what we eat and how much we eat (which can trigger eating disorders), it's so refreshing to see someone celebrate her body. She reminds us that it's not a sin to love food and it's especially not a sin to love yourself. Something the world needs a little more of, if you ask me.

Luisa continues her set by going into how self-depricating women tend to be and how quick we often are to talk down about ourselves, rather than up. Well, Luisa Omielan has no time for that attitude. "Upgrade yourselves, b*tches," she commands. Then she goes into the hotly-debated and often photo-schopped notion of the thigh gap and puts the whole damn thing to rest by pulling down her eye-popping leggings, standing in her undies on a stage in front of thousands and proclaiming, "Yes, my thighs might be touching each other...But I'm sorry b*tches, if you were this close to my vagina, wouldn't you start touching yourself?"

Taking the control back from body-shamers and guilt-trippers is just one of the many powerful tools in Luisa's wheelhouse. She tackles mental health, heartbreak, and the nasty attitudes she often faces as a succesful woman in the business of comedy. The joy of her comedy is that it's less a show and more of a party. She involves the audience by bringing them to their feet with Beyonce dance numbers and Adele sing-a-longs. From time to time, she'll even bring them to tears with her honesty about depression and losing "the one." If that doesn't make you love her already, Luisa also hosted a sold-out Valentine's Day Single Ladies' Ball that was jam-packed with women who were there to celebrate their fearless selves. In Luisa's world, everyone is invited to the Love Yourself and Screw Those Who Try to Bring You Down party.