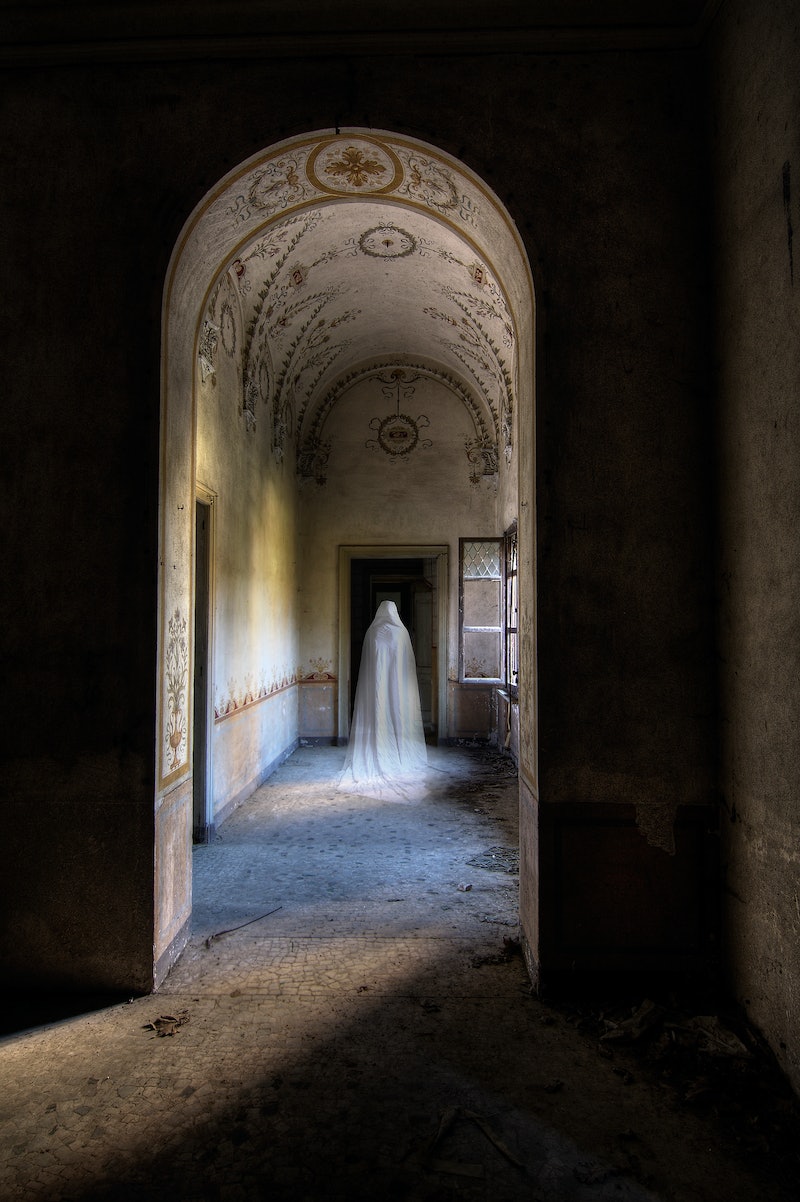 Do you believe in ghosts? If so, I apologize, because I'm about to burst your bubble: According to science, ghost sightings might be hallucinations caused by toxic mold — not visits from beyond the grave. If you feel like some things should just remain unexplained, you might want to exit this page now; however, if you're as interested in the "whys" behind alleged ghostly phenomena as I am, keep on reading. It's a plausible theory, and the results of the study could be quite interesting indeed.

A study currently being conducted by researchers at Clarkson University in New York hopes to determine whether supposed hauntings can be firmly explained by science. “Hauntings are very widely reported phenomena that are not well-researched,” said Associate Professor of Civil and Environmental Engineering Shane Rogers, who is leading the study, in a press release. “They are often reported in older-built structures that may also suffer poor air quality. Similarly, some people have reported depression, anxiety, and other effects from exposure to biological pollutants in indoor air. We are trying to determine whether some reported hauntings may be linked to specific pollutants found in indoor air.”

Accordingly, Rogers and a group of undergraduate students will be measuring the air quality in a number of reportedly haunted locations during the spring and summer. Their method involves comparing samples from these locations to samples from other locations that do not carry any reported hauntings; they will also perform some analysis on types of toxic molds that can sometimes cause psychological side effects in humans (hi there, black mold!).

No, not that kind of toxic, Britney.

It's no secret that exposure to toxic substances can cause confusion, disorientation, and hallucinations (on top of, y'know, all the other physical side effects like organ and tissue damage). We've even seen examples of it in action throughout history — incidents that often begin with odd behavior deemed inexplicable at the time, only for the cause to be determined later as the result of a slow and regular poisoning. Consider, for instance, the building at New Jersey's Standard Oil Refinery dubbed “The Looney Gas Building” in 1924: All workers who spent a significant amount of time in the building suffered from mental deterioration in the form of memory and coordination loss, unprovoked irritability and rage, and delirium. At the time, no one knew why it was happening — but later on, it became clear that it the "looniness" of those who spent time in the Looney Gas Building was due to the fact that they handled an awful lot of tetraethyl lead in there. I'm theorizing here, but I would bet money that, had the Looney Gas Building been older than a year at the time (it was built in 1923), the strange behavior would have been chalked up to ghostly activity.

Or consider the Salem Witch Trials. Although at this point, several centuries on, we'll likely never totally unravel the cause of the panic, one of the more convincing theories involves poisoning by ergot, a fungus that attacks grains like rye. It's likely — highly likely, even — that the evidence of “witchcraft” and the strange illnesses plaguing Abigail Williams, Elizabeth Parris, and the other girls who pointed all those fingers were caused by an ergot-ridden crop of rye. According to Neatorama:

Ergot needs warm, damp weather to grow, and those conditions were rife in the fields around Salem in 1691. Rye was the primary grain grown, so there was plenty of it to be infected…. Most of the accusers lived on the west side of the village, where the fields were chronically marshy, making them a perfect breeding ground for the fungus. The crop harvested in the fall of 1691 would have been baked and eaten during the following winter, which was when the fits of madness began. However, the next summer was unusually dry, which could explain the sudden drop in the bewitchments. No ergot, no madness.

With stories like these (and many more) in mind, it's not too far of a leap to the idea that hauntings are actually hallucinations caused by mold. Although we'll have to wait and see whether the results support the theory, the idea is pretty convincing all on its own. I mean, I love spooky stuff — I'm just not totally sure whether I believe in ghosts. I'm of the opinion that most alien abduction experiences — or at least, the ones that involve being taken from your bed in the middle of the night — are likely the result of sleep paralysis; ghost sightings being hallucinations brought on by exposure to toxic substances, therefore, makes a similar sort of sense to me.

Of course, there's also this: I may not be completely convinced of the existence of ghosts… but I don't think a ghost has to be present for a place to be haunted. Personally, I think calling a location “haunted” is our way of coping with something traumatic that may have happened there — which ultimately means it's haunted more by our own memories than by any spirits or what have you. Do with that what you will.

Rogers and his team are expected to publish their findings at the conclusion of their study; there's no word exactly when that will be, but given that they're conducting their research over the summer, I would imagine the earliest it will be is this fall. I'll be on the lookout — but in the meantime, I'm still going to keep reading ghost stories. Because regardless as to whether they're true or not... ghost stories are just fun, aren't they?

More like this
The 8 Best Crystals For Meditation, According To A Healing Energy Practitioner & Meditation Teacher
By Lauren Moison
After 24 Years Of Disney Vacations, I Finally Took A Trip On My Own
By Charlie Mock
16 Valentine’s Day Quotes About Chocolate That Will Make You Hungry
By Emma Cueto
Savannah Guthrie Got Her First-Ever Tattoo With This Former Wild Child
By Suzanne Zuckerman
Get Even More From Bustle — Sign Up For The Newsletter
From hair trends to relationship advice, our daily newsletter has everything you need to sound like a person who’s on TikTok, even if you aren’t.