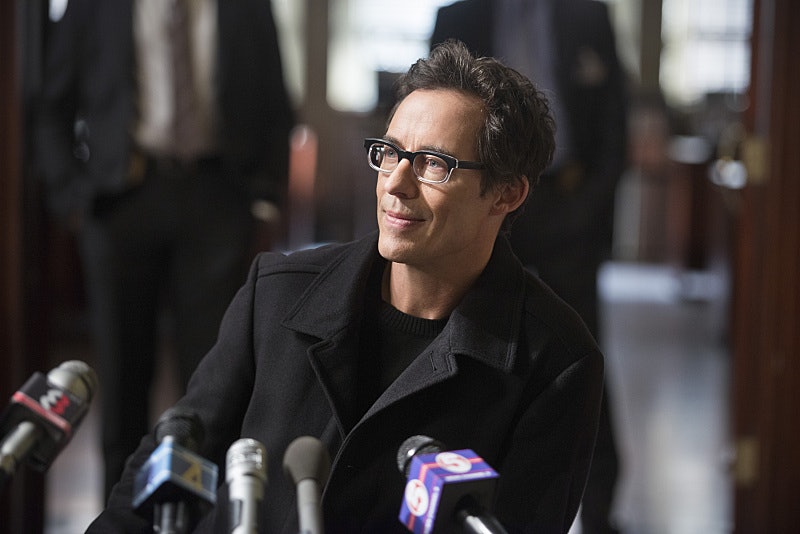 What is it exactly that makes up Harrison Wells on The Flash? During a recent episode, we learned that the evil onion that is Doctor Wells has at least one decent layer. Once upon a time, Wells was a nice scientist who loved his wife and wanted to open a research facility with her. Like a supernatural Don Draper, the man that once was Harrison Wells is now dead. His identity and face were absorbed by the time traveler Eobard Thawne, a "distant relative" of Iris West's boyfriend Eddie. When the Future Thawne became stuck in young Barry Allen's time on the night of Nora's murder, he needed to start a new life and sought out Wells for his evil deeds. It was this accident that also took the life of Tess Morgan, Wells' wife. Just when we thought we had figured out this guy out and thrown him in the bin of supervillains, this reveal happened. Rest in Peace, Harrison Wells — whoever you were.

Still confused? It's completely understandable. Harrison Wells has been The Flash's biggest source of mystery in its first season and he's only getting more complex. He always has an ominous twinkle in his eye and a secret to reveal. The fact that he wasn't a DC Comics character made him a source of intrigue as well. It was speculated that Wells was everything from a fellow vigilante and hero to another DC villain altogether and an older version of Barry Allen himself. Now that we know who Wells really is (for now... there could be 10 more twists in store as The Flash ends its first season) let's take a look at the shady mélange that dwells inside Barry Allen's mentor.

So what do you get when you add all of that up? One of the most intriguing characters on TV, who surprises us every single week on The Flash.