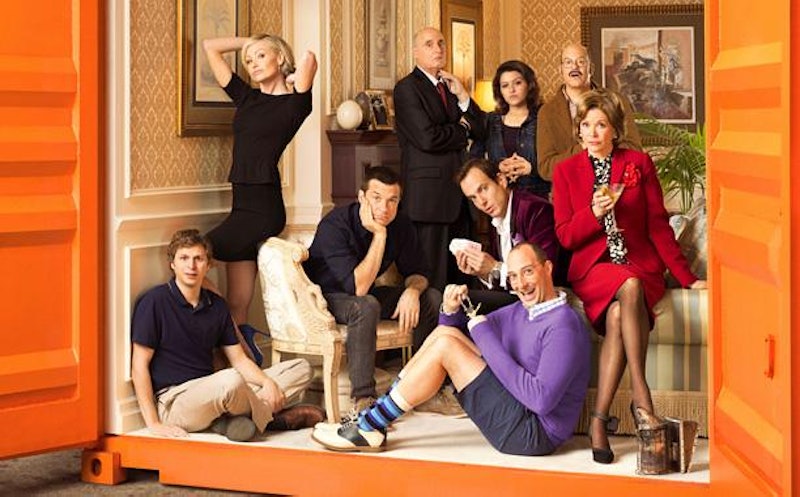 Get your steaming bowls of hot ham water ready cause it's time to celebrate. Arrested Development producer Brian Grazer confirmed Tuesday that Arrested Development will be back with 17 new episodes before you can say Dr. Fünke's 100% Natural Good-Time Family-Band Solution. Now, Season 4 was a whole two years ago, so it's totally possible that you don't remember all that went down — so, in preparation for the new episodes, it seems necessary that we revisit the Bluth shenanigans of Season 4 so we can start to think about the plots Arrested Development Season 5 should explore.

Grazer let the news of new episodes slip in an interview for the podcast "The B.S. Report." There was no beating around the bush with the announcement, Grazer stated simply, "People are loyal to it... and we're going to do another 17 episodes."

Grazer gave no information about when the new season will debut, what the format of the show will be, or how production will manage the casts' busy schedules. We have very little to work off of when trying to imagine what a Season 5 of Arrested would look like. However, what I lack in cold, hard facts I make up for with rampant speculation.

The end of Season 4 didn't exactly tie up the loose ends, which makes the confirmation of a Season 5 all the more exciting. So, in order to prepare for the new episodes, let's take a look back at where we left these guys in Season 4 so we can start to imagine how the stories will unfold in Season 5.

Where we left him: We last saw Buster in circumstances that were not exactly ideal. Upon learning that Lucille 2 tricked him into missing his mother's trial (thereby sending her to jail), Buster goes on a juice-fueled rampage that leaves Herbert Love in a coma. Later, Lucille 2 is announced to be missing and Buster accidentally incriminates himself in her disappearance. Buster is arrested for Lucille 2's murder at the end of the season.

What could happen next: The Bluths are no strangers to jail. We've seen George, Sr., Oscar, Lucille, and Gob in jail. It looks like we will finally get to see how Buster fares in the slammer. Buster undoubtedly did not inherit his mother's gift for quickly rising through the ranks of sinister prison gangs. However, Buster's hook/giant hand and wildcard demeanor end up making him a prison legend as he crushes foes and organizes for illegal juiceboxes to be smuggled in to him.

Where we left him: After a season of attempted wall-building and "Sweat and Squeeze" scheming, George, Sr. finishes out the season by fleeing to his apartment wearing a red wig and begins to live as a woman after getting upsetting news from his doctor about his estrogen and testosterone levels.

What could happen next: George, Sr. rapid adoption of femininity is one we should have seen coming back during his dress-wearing-in-the-attic days. In the fifth season, the stars align as George, Sr.'s female alter ego runs into Mrs. Featherbottom at the market. A passionate, heady affair occurs before the two realize the others true identity.

Where we left him: George Michael ends Season 4 by punching his father in the face upon finding out that Michael knew that George Michael was the other man that Rebel was dating but continued to pursue her anyway.

What could happen next: Ron Howard finds out about both Michael and George Michael's trysts with his daughter. Once his outrage subsides, he realizes that their familial love triangle story would make millions on the big screen and releases the box-office hit Le Père Et Le Fils Dangereux. Or, alternatively, George Michael and Michael compete on a Bachelor-esque dating gameshow for Rebel's hand. The only contestants are the male members of the Bluth family and Tony Wonder.

Where we left him: Gob is in a very interesting position after the end of Season 4. He has recently had sex with Tony Wonder by accident following the curious Ann/Tony Wonder/Gob mask switch up. Gob has also been named the new President of the Bluth Company after Lucille 2 turns up.

What could happen next: After a transcendental spiritual encounter with a bee, Gob confronts his true self and realizes he has been repressing his sexuality. Gob declares his love to Tony Wonder and the two take to the see, never to be heard from again.

Where we left her: After her stint as a prison gang member, Lucille is transferred to Lucille 2's rehab clinic where Tobias is her therapist. Tobias recruits her to be a part of his Fantastic Four musical. Later, on Cinco de Cuatro, Lucille decides to take to the seas and flee but her plan is foiled by Tobias who, after unwittingly psychoanlyzing her correctly, inspires Lucille to return to rehab.

What could happen next:After returning to rehab, Lucille undergoes intense therapy and becomes self-actualized. She finishes her treatment and begins to assimilate back into society. On her first night out of rehab, Lucille gets a drink at her favorite bar to celebrate her mental clarity. The bartender brings her her drink and promptly whips off his glasses and mustache, revealing himself to be none other than the legendary Gene Parmesan. Lucille screams in glee and realizes that the man of her dreams has been right in front of her (or lurking around corners in disguise) all along.

Where we left her: After her radical plans with Marky Bark go awry, Lindsay accidentally cites a riot and wins the favor of the Cinco de Cuatro crowd with her discussion about the wall. Upon the announcement that Herbert Love is in a coma, Lindsay accepts an offer to run in his place.

What could happen next: After a campaign full of illegal bribery and blackmail, Lindsay somehow finds herself a member of congress. Hilarity ensues as Lindsday navigates the waters of Washington as she struggles with her life as a congresswoman.

Where we left him: At Cinco de Cuatro, the Fantastic Four play is a disaster. DeBrie relapses and Tobias is threatened with jailtime for his copyright infringement. Tobias insists the show must go on and takes DeBrie's place as Sue Storm. Tobias accidentally boards the wrong boat when he's mistaken for Lindsay in his blonde wig. Tobias boards Barky Mark's boat, which has a bomb on it. The bomb explodes and the explosion sinks Marky's boat.

What could happen next: Tobias survives the boat explosion and goes on to get Buster off for Lucille 2's murder by his testimony at the trial which proves that Buster is innocent on the grounds of insanity. Buster gets out of prison a hardened criminal and eventually sucks Tobias into getting involved in his underground gambling ring.

Where we left her: After seducing her boyfriend, Perfecto, Maeby reveals that she is not, in fact, 17. To her chagrin, Perfecto announces that he was lying about his age too and he's not an undercover cop but just a 17-year-old guy. At Cinco de Cuatro, Maeby is arrested as a sex offender by her algebra teacher, Donny Richter, who is actually Rocky Richter who has been pretending to be his brother while working undercover. Maeby realizes that she will be forced to live in Sudden Valley with all the other sex offenders.

What could happen next: Maeby utilizes the flock of sex offenders living in Sudden Valley by blackmailing them into working as her crew as she produces her next feature film. Maeby schemes her family into signing away their movie rights and makes a low-budget, indie film about the Bluth family that goes on to win the Palme d'Or at Cannes.

Where we left him: Michael had just been punched in the face by his son for knowingly dating his girlfriend, Rebel Alley.

What could happen next: Michael realizes he has to do what's right for his son. He ends things with Rebel, only to find out weeks later that Rebel is pregnant and the baby is either Michael's or George Michael's. Rebel's proclivity for drama leads her to bring both men on the Maury show with her after the baby is born so Maury can announce who the father is. The father ends up being Oscar Bluth [fake spoiler alert].