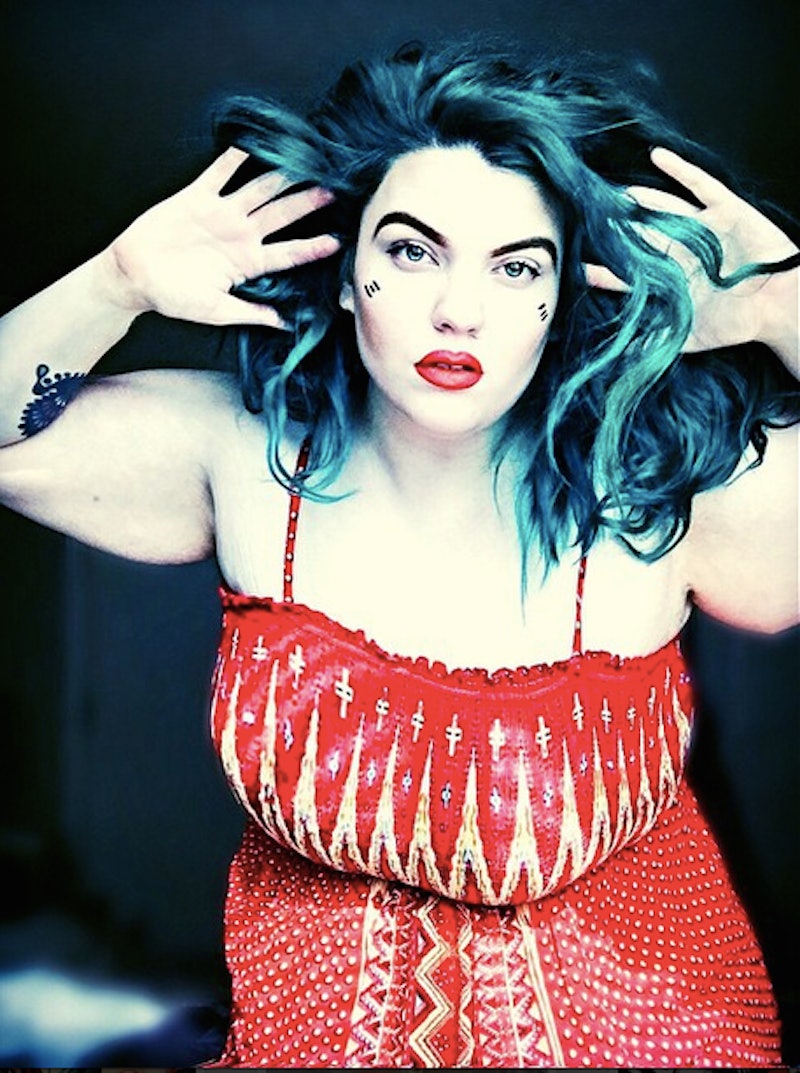 When Tess Holliday signed to Milk Management back in January, I first saw it covered here at Bustle before it quickly spread to news outlets across the globe. The story of a 5'4" size 22 woman getting a modeling contract was seemingly shocking to people outside of the plus-size community. But to most within the community, Holliday's signing was inevitable. She completely created her own lane in the industry and eventually the world began to see her as the star that we always knew.

The line between plus-size model and plus-size blogger is so blurred that I see bloggers like GabiFresh constantly clarifying that she defines herself as a blogger and not a model. And though style blogger Nadia Aboulhosn does identify as a model, she still still identifies as a blogger (which is how she started).

But this blurred line makes sense to me. The path to becoming a working plus-size model when you are above a size 12-14 is one that involves organizing your own shoots with photographers, running a blog to gain exposure, and connecting with indie brands who will likely be your first clients. I get almost daily questions about how to become a model, which is still odd to me because I consider myself a designer first and foremost. But my answer to that question is always the same: You create your own opportunities. No one is going to take a chance on you that you wouldn't take on yourself! This is why I wanted to create this list of unsigned plus-size models, because they have all created amazing portfolios of work without an agency behind them.

There's no doubt that Essie Golden knows how to hustle — just look at the long list of popular plus-size brands under her belt. It is a shock to me that with that roster, she is still unsigned. Blurring the line between model, blogger and advocate, Essie promotes body positivity with the hashtag #GoldenConfidence.

Named a "Powerhouse to Watch" in the February '15 issue of Skorch Magazine, Olivia Campbell is a force. She can be seen in Monif C.'s latest swim campaign which also landed her as the only unsigned model featured in Plus Model Magazine's "15 Models We Think Are Perfect For the Next Sports Illustrated."

Modeled for: Zelie for She and Domino Dollhouse.

Though she doesn't put her real name on her Instagram, Dandy (as I call her in my mind) is constantly on my feed as one of the main models for indie darling, Zelie for She. She can pose with the best of 'em and her selfies are truly museum-worthy.

Megan Kimberling is definitely a model who creates her own opportunities. Though she doesn't have a long list of publications or clients like some others on this list, her Instagram is full of impressive professional photos that she orchestrated including a babely series of tasteful nudes.

Isabel Hendrix is a self-identified weirdo babe who has found her niche among more alternative-leaning plus-size brands. Donned with what feels like a different rainbow hair color nearly weekly, she is breathtaking in every shade. She can be found wearing glitter, fur and sequins on her blog or as the face of Tunnel Vision's "Hottie with a Body" section.

I first saw Katana Fatale when she became a model for one of my favorite fellow indie brands, Chubby Cartwheels. There's no denying that between her aqua green hair and piercing eyes, she's a stunner. In 2015 alone, Katana has been featured on the cover of Skorch Magazine as "the world's newest IT girl" and the back cover of Volup2 magazine.

Sabrina Servance doesn't blur the line between model and blogger so much as model and reality television star. While Sabrina's modeling opportunities continue to stack up, she's probably best known for her role as the voice of reason on the Lifetime's Big Women Big Love. And Sabrina hasn't wasted any time since the show wrapped; she has already been featured on two magazine covers in 2015: WMDSF and Curvysta.

Peach doesn't just have curves straight out a Nicki Minaj song but she also has the voice of an angel. As evidenced from her IG name, Peach is an up-and-coming vocalist but she also can be found sporting her signature pout while modeling curve-hugging fashions.

Modeled for: Manik Mag, Amitabon Boutique and Plus Model Magazine.

There's no doubt that Jezra M. is working to change the face of plus-size modeling. She's a strong advocate for body positivity and empowerment. Confidence and self love radiate from each and every flawless picture she posts.

Rayna Salcido Alvarez may add a #SometimesIModel to her posts on the 'gram, but she certainly has an impressive roster of vintage and vintage-inspired work including a regular gig with Swak Designs.

I am of the belief that being true to yourself always wins and Sydney Sparkles has certainly found her niche as a pinup model. With a look that reads very Barbie meets Grease, Sydney can currently be found on the homepage of industry-leader Pinup Girl Clothing.