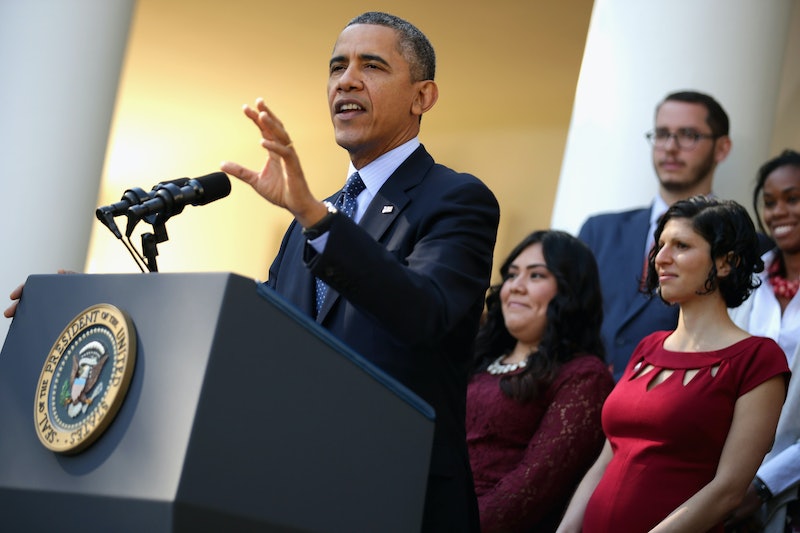 Congressional hearings on Obamacare's disastrous launch start Thursday, and, well, hold on to your foldout chairs, ladies and gentlemen. Written testimony from the website developers — the contractors in charge of making sure Healthcare.gov was operational and glitch-free on Oct. 1 — indicates that the only thing they all agree on is that they are not to blame. The contractors from CGI Federal, Optum/QSSI, Equifax Workforce Solutions, and Serco apparently say other contractors or government officials are to blame for the website's embarrassingly glitchy launch. (The delays were so bad, in fact, that even Democrats began calling for an extension in the deadline to sign up for healthcare before facing a penalty. The Obama administration seems to have caved.)

The reasons for the hearings are pretty basic: whenever some policy implementation goes horribly awry, someone needs to be held accountable. The checks and balances of Washington mean that Congress gets to run the oversight hearings — and, though the Healthcare.gov launch could certainly have been messier, Congress's mistrust of the new healthcare law means a small reason is as good as any.

Testimony suggests that the problem behind the Healthcare.gov glitches lies in the fact that the process of building the website was decentralized. Different contractors took on different parts, with a federal agency overseeing the whole process from above. Then the parts were all pieced together, and — though it probably should not have been a surprise, given the construction process — they failed.

The Washington Post's Lydia DePillis reports that CGI Federal, one of the contractors coming under scrutiny in the healthcare hearings, has a long history of playing rough to get and keep government contracts. In the current hearings, CGI Federal blames the website failure on a part of the site built by another contractor.

"Unfortunately, in systems this complex with so many concurrent users, it is not unusual to discover problems that need to be addressed once the software goes into a live production environment," wrote Cheryl Campbell, a senior vice president, in her advance testimony. "This is true regardless of the level of formal end-to-end performance testing — no amount of testing within reasonable time limits can adequately replicate a live environment of this nature." The company says that its own parts of the site underwent eight technical reviews.

The part Campbell and CGI blame for the failures was designed by Optum, which in turn blames the government for the Oct. 1 disaster. It says the government decided to make users register for an account before browsing insurance plans, which meant everyone rushed to do that, first.

And so the cycle of blame goes on and on.

Plus, there's the congressional hearings themselves to worry about. The federal government is still recovering from pushing the nation to the brink of default. In addition to the finger-pointing that's to be expected from the contractors — who probably want to get another contract in Washington someday soon — there's the added bonus of the hearings happening in a highly partisan political climate. Politico's David Nather worries that they'll be corrupted by Republicans who want to see Obamacare fail, rather than to get to the bottom of the mess.

"The problems with Obamacare are so pervasive that they bear a deeper examination," Texas congressman Kevin Brady told POLITICO Wednesday. "You think this website is bad? Wait until the government starts making the decisions about patient care, and reimbursements and treatments."

Erm, yeah. That's how that works. There needs to be some real accountability for the glitches, and it's clear that the White House won't provide transparent information. But is trusting Congress to figure this out really the right solution? Let's just hope Republicans keep in mind how quickly their approval ratings plummeted when they tried to hold firm during the debt ceiling debate.