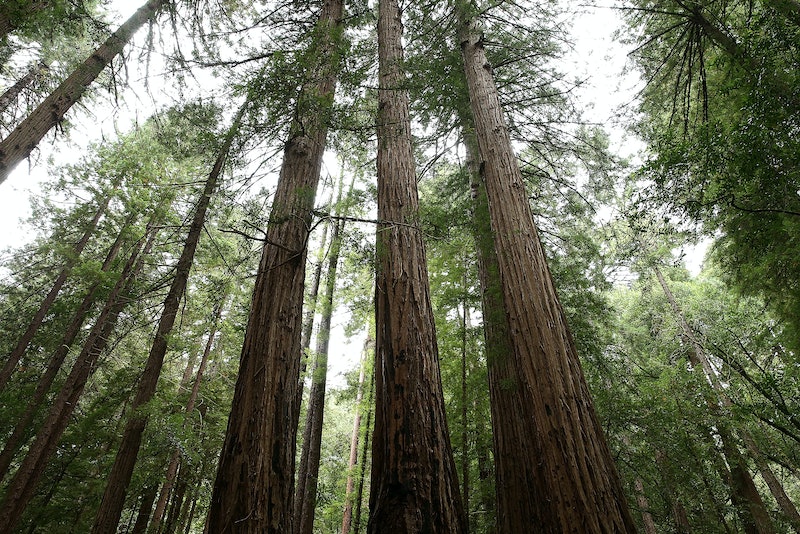 Trees have existed as literary tropes pretty much since the earliest human writings and myths. And it makes sense — trees are one of the oldest proven species on the planet, with their existence dating back to the time when dinosaurs ate their leaves.

If you've ever been to Sequoia National Park in California (or a similar national park, forest, or arboretum across the world), you know the feeling you get while standing among these huge, ancient beings — you feel small and powerful at the same time. It makes you think about your role in the world around you and how amazing it is that something that existed on this planet for so long and how dare we pollute it and chop down these beautiful things to make paper that no one even uses anymore because everything pretty much happens online now?!

For centuries, trees in literature have represented everything from the power and mysterious ways of nature and stood for everything from immortality, to strength, to family. While biologists will tell you that every type of tree serves a different purpose on this Earth (supplying fruit or nectar, giving off Oxygen to keep a natural, healthy, chemical balance), spiritualists will tell you that different kind of trees are symbolic for various things. For example, while a cherry tree is more likely to represent rebirth, an oak tree often represents power. For writers and literature lovers, the meaning of trees is a combination of the two.

I'm celebrating Arbor Day this year by remembering all of literature's most memorable trees — from the Whomping Willow who disguises the opening of a secret passage leading from the Hogwarts grounds to the Shrieking Shack to the tree who gave so much of herself to someone that she ended up with just a stump.

The Giving Tree by Shel Silverstein

One of the most iconic trees in children's literature (also one of the most popular tattoos inspired by picture books), the relationship between Boy and the tree in Shel Silverstein's The Giving Tree represents being charitable to a fault. When he's a child, Boy plays with the tree as if she's a companion — swinging on her branches, climbing her trunk, etc. But as the boy ages, he begins taking more and more: selling her apples and using her branches and trunk until she's bare. The Giving Tree, while sad, remains a soul-full and important story about finding balance and happiness in a relationship.

Since it was first published in 1960, Harper Lee's classic To Kill a Mockingbird has been released in dozens of editions with different styles of cover art, almost all of which have one thing in common — the inclusion of an oak tree. After the mysterious Boo Radley starts leaving gifts for Scout and Jem in a knothole of the oak tree outside his house, it comes to symbolize friendship and acceptance despite unlikely circumstances. Of course, when the knothole is closed with cement, it represents an entirely different theme of the novel — fear and intolerance.

Just after Rochester, Jane's employer and the master of Thornfield, proposes to Jane underneath the horse-chestnut at the bottom of the orchard, the exact same tree gets hit by lightning in the middle of the night, splitting it directly in half. Coincidence? I think definitely, definitely not. However, I'm still not sure if the splitting represents both Jane and Rochester together or just Rochester. If it's the two of them, Jane is surely the part that splits away (as she runs from Rochester's temptation). However, Rochester later compares himself to the torn tree and Jane to a plant. I wish Charlotte Brontë could just tell us the truth.

The Little Prince, a naive traveler from outer space, planet-hops and meets different grown-ups who range from royals to drunkards. However, back on his own planet, baobabs grow as tiny weeds that, when they aren't uprooted in their early life, become giant plants that take root and can cause huge damage to the planet. Metaphorically, the baobabs stand for our own faults — things that we see forming within us but, if neglected, can take over and change our character. A children’s book that can be read as a lesson for adults, the 80 pages of The Little Prince are chock-full of lessons like the one represented by the baobabs.

A Tree Grows In Brooklyn by Betty Smith

Betty Smith's 1943 novel about Francie Nolan, an impoverished Irish-American, and her family is anchored by its central metaphor: the Tree of Heaven. The tree, native to China and Taiwan and now considered an invasive species and common in New York City lots, sprouts in the yard of their Williamsburg tenement. It's determination to grow and its resistance to being destroyed parallels Francie's own ambitions.

The Lord of The Rings by J.R.R. Toklein

This list wouldn't be complete without mentioning J.R.R. Tolkein's Ents (called Onodrims by the Elves), the talking tree-like characters in the Lord of the Rings series. Headed by Treebeard (believed to be the oldest creature in Middle-earth), Ents vary in everything from their height to the number of their fingers and toes—they tend to become more like the trees that they herd. Their biggest purpose is acting as guardians of the forest — which any LOTR fan knows is no small tasks.

Hermann Hesse's novel Siddhartha tells the life story of Siddhartha Gautama (otherwise known as Buddha) and highlights the moment that Guatama first attained enlightenment. After spending 49 days meditating, Gautama discovered the truth about life while sitting under a Bodhi tree in Bodh Gaya, India. For this reason, the Bodhi tree is common in Buddhist teachings and symbols.

The sole metaphorical (and not real, physical) tree on the list, the willow trees in Shakespeare's Othello only exist in Desdemona's song, which she learned from one of her mother's servants who loved an insane man. Sound familiar? Yeah, probably not a coincidence that she sings the same song while preparing for bed on the night that she's murdered. When comparing it to another Shakespearian tragedy, it's none other than a willow tree that Ophelia falls out of, causing her to drown in a brook.

Harry Potter And The Chamber of Secrets by J.K. Rowling

While we're on the subject of willows, I have to give a shout out the infamous Whomping Willow, a large tree with functional limbs that was planted with the sole purpose of disguising the opening of a secret passage that leads from the Hogwarts grounds to the Shrieking Shack — the mysterious abandoned house in Hogsmeade. The tree, which swings its arms violently when it feels threatened, has a small knot near its base that was pressed, becomes immobile (the trick that allowed Remus Lupin to move back and forth between the villages).