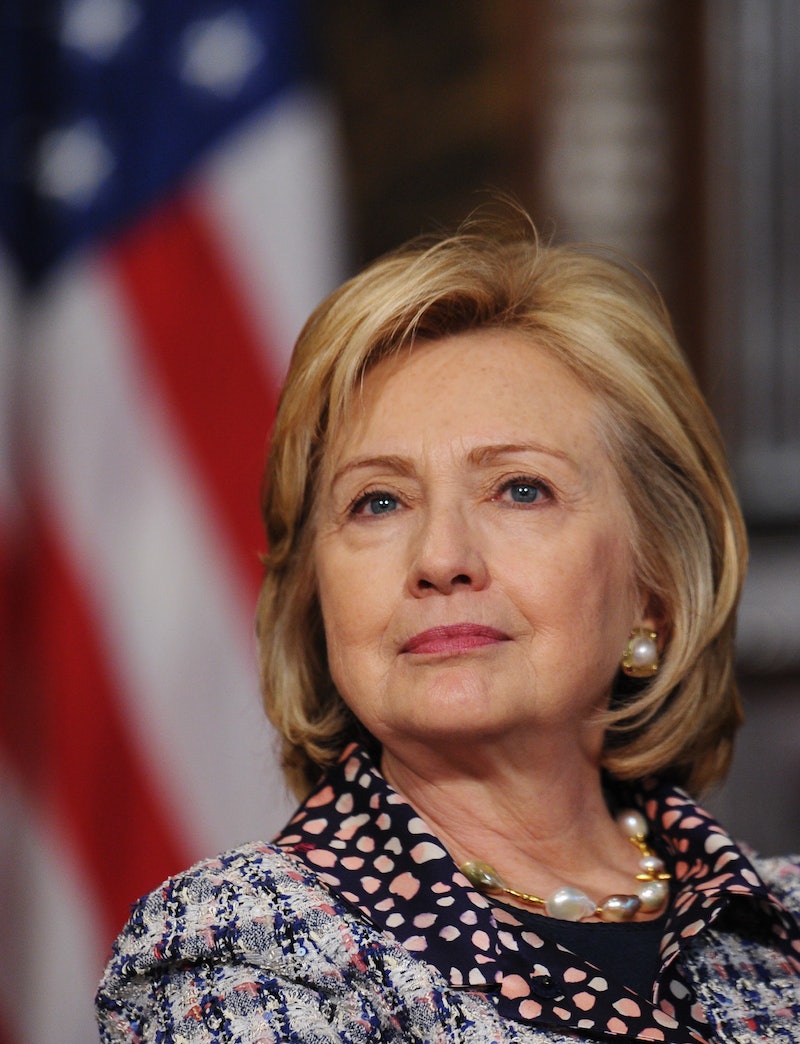 If Sunday's announcement that Hillary Clinton will run for president in 2016 has given you the political activism bug, you don't need to wait another second to put your passion into action — you can already sign up on her website to volunteer for Clinton's campaign. And if you do feel passionate about Clinton, there's no better way to show it than by volunteering. Campaign volunteers do much more than fetch coffee or lick envelopes — volunteers and their tireless efforts are considered a crucial element in any president's campaign, and many people attribute Barack Obama's 2008 White House win to the passionate dedication shown by his large number of campaign volunteers.

So if you're feeling fired up for the 2016 election, there's no reason to not get cracking right now and find out what you can do. Because volunteers aren't only important during the run-up the actual presidential election — they perform crucial duties during the primaries, like encouraging registered voters to make sure that they don't miss out on local voting opportunities, and getting as much information about their candidate out into the public as possible.

Not to mention, working for a political campaign can be good experience for anyone considering a career in politics, public policy, or the law — or anyone who just feels passionately about the politics of their candidate. So if you're stoked to vote for Hillary, and want to share your excitement with the world, here are the five steps to volunteering for her campaign.

The first step in turning your excitement into action is super simple: just get on your computer. Signing up to volunteer on the Clinton campaign is as easy as jumping on to Hillary Clinton's website and filling out your email address and zip code on the volunteer sign-up form. The campaign will contact you as soon as there are volunteer opportunities that you can take advantage of in your area.

And if you're currently a university student, paying a trip to your campus's next College Democrats of America meeting might put you in touch with other folks in your community who are planning on volunteering for Clinton's campaign — or even with experienced volunteers who are already planning campaign events in your town.

2. Figure Out How Much Time You Want To Donate

Contrary to what many people believe, political volunteers don't have to give every spare second to working on campaigns. Some people choose to totally immerse themselves in volunteering for their favored candidate, of course — but most people working on political campaigns as volunteers have other jobs, are in school, or are caring for families, and organizers understand this.

So realistically figure out how much time you can give to the campaign without blowing off school, or stressing yourself out. Even one hour a week can get a lot done for a campaign, so don't be shy away from being realistic about your own limits — campaign organizers will be glad to have however much time you're able to give.

3. Be Ready To Do Lots Of Different Activities

One cool aspect of volunteering early in a campaign is that you may get a taste of lots of different volunteer activities, from tabling in public areas to distributing information on Clinton and her policies, to helping register voters. Being a little bit flexible can be a real asset at this phase. Don't be afraid to ask if there's a specific area you'd really like to work in (like social media, for example), but also know that trying out all different campaign activities can help you meet all sorts of supporters — as well as many different people working within the campaign.

4. Don't Get Bummed Out If You Don't Get A Fancy Position

Most of the high-profile volunteer positions on a campaign go to people who have been involved in political volunteering for years, and have worked in previous local and presidential elections. So if you have great social media experience, but still get asked to do very basic volunteer work like making get-out-the-vote calls, don't think that it's a judgement on you or your skills. Know that your volunteer work matters, no matter what you're doing, and that seemingly "entry level" work like making get-out-the-vote calls is actually very important.

5. Be Prepared To Help The Campaign Lay Groundwork

It can be thrilling to get in on the ground floor of a political campaign — it can also be a great way to make friends and network with folks who will be involved in the campaign as it develops on the way to the primaries. But the volunteer work early in the campaign might be more focused on reaching out to volunteers, rather than door-to-door campaigning or other more active forms of volunteering.

But if you want to be where the action is, don't fret if your volunteering career gets off to a quiet start: all the intense, on-the-ground volunteering work will come in time. Right now, you get to be a part of a major presidential campaign from the beginning. And how cool is that?

More like this
Prince William Condemns “Unacceptable” Comments Made To A Black Guest At Buckingham Palace
By Shahed Ezaydi
The David Beckham Qatar Controversy, Explained
By Sophie McEvoy
Michelle Williams & Thomas Kail's Relationship Started On This TV Show's Set
By Sabienna Bowman
Bustle Daily Newsletter: December 2, 2022
By Hayley Schueneman
Get Even More From Bustle — Sign Up For The Newsletter