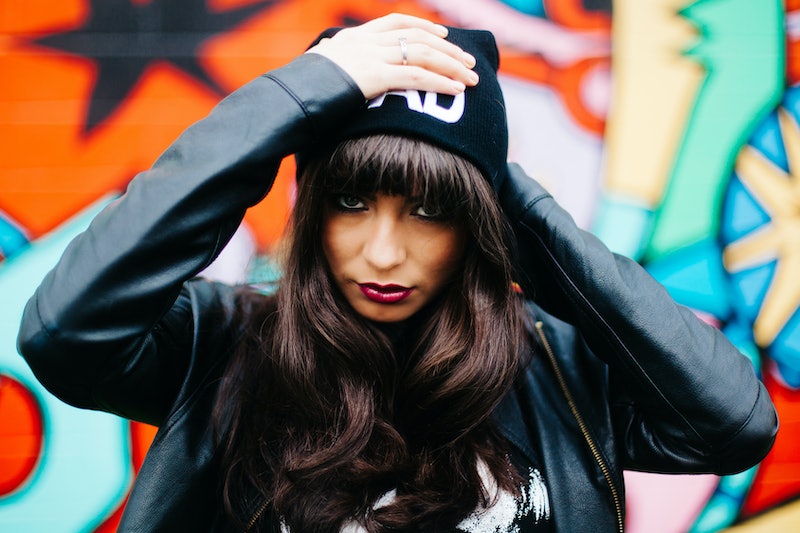 Jona Weinhofen is PETA's newest poster boy. And there has been uproar on the Internet as the anti-shearing campaign starring I Killed the Prom Queen's guitarist has kicked off a large debate on sheep shearing. In PETA's campaign, Weinhofen is pictured holding the bloody body of a limp lamb accompanied with text stating, "Here's the rest of your wool coat."

The Guardian reported that agricultural minister Barnaby Joyce said the animal was made of plastic. The argument centers around outraged farmers claiming that the campaign is untrue, but rather than grabbing for their pitch forks and amassing an angry mob, they have flexed their fingers and used social media to vent their frustrations instead.

This got me thinking: There are so many products that are used in fashion that are derived from animals — most often, dead ones. We use leather, wool, numerous types of fur, skins, feathers, teeth — and these are just the tip of the iceberg. In essence, we are parading around in carcasses. I am by no means an ethical fashion angel, in fact some (or most people) may think me a hypocrite. So let me start at the very beginning, because as The Sound of Music taught me, it's a very good place to start. Are you sitting comfortably?

Early last year I watched two documentaries — Blackfish and The Cove — and I was so unnerved by the cruel conditions and violent acts that the human race inflicted upon these beautiful, intelligent beings that I decided to revert back to vegetarianism. I had been a vegetarian for about four and a half years as a teenager but (I cringe to admit) I was tempted back into an omnivorous life by an ex-boyfriend wielding a bacon sandwich. So, in March 2014 I segued back over to eating plants and dairy and everything was fine... until I realized that a lot of cruelty occurs in the dairy industry, too.

It was like opening a can of worms: The more I researched, the easier it was to find further information, and I was utterly flabbergasted by the amount of information that was out there that I had been oblivious to. But once I had read these articles, watched these videos and heard the terror, I couldn't un-see or un-hear any of it; although sometimes I wish I could.

I sought advice from a lovely vegan friend who informed me of her experiences and even sent me some fake cheese through the mail (amazing friend, huh?) and I decided I wanted to try veganism. After buying numerous books, scouring the Internet for recipes, and pestering my aforementioned friend for tips, in January my New Year's Resolution was to be a vegan. Little did I know that after a month of going cold turkey without dairy I would become a quivering, crying mess and order a four cheese pizza. I hate to admit it, but that pizza was one of the best things I have ever tasted.

Apparently there's a little something called casein which is found in milk (and consequently cheese) and the online general consensus is, it's highly addictive. So that explained my cheesy meltdown.

Moving forward, I realized I couldn't go cold turkey on dairy due to my recently discovered cheese addiction, so instead of throwing in the towel, I thought I'd take baby steps to a plant based diet including drinking non-dairy milk and trying to cut down on cheese. I continued with my research and found these eye-opening 60 second videos from PETA, which highlight animal cruelty in specific industries, for instance bullfighting. I watched them all and realized that if I wanted to live my life without inflicting any pain on any other being, I would need to reevaluate my entire existence.

Like lightbulbs bursting bright in my mind, I remembered my bedding was filled with goose down, my grandmother's pearls were resting in my bedroom drawers, and shoved to the back of my wardrobe was a fox's tail that had fallen off its keyring. I could have wept as I recalled that my favorite jacket — made by Reiss and given to me by my father on my twenty-fifth birthday — was in fact made of leather. An astoundingly beautiful, luxuriously thick leather might I add...

Here is the problem: I am a Jekyll and Hyde. Part of me wants what's best for the planet and its inhabitants but deep inside me there dwells a grotesque, fashion industry beast who rules my life without me being aware of its puppet-mastery.

The horrific beast rips skins from creatures and throws their vulnerable bodies onto piles of other pillaged animals, some of whom are still alive. The evil monster, who lives inside me (and millions of others) tears feathers from screaming fowl, decapitates limbs and rears helpless creatures in cages so that they can be used and abused. All so we can wear the most on trend and stylish clothes. It's a vicious circle; the garments created by this horrendous cruelty are sold to us as luxuries, as near unattainable items that we aspire to someday acquire. But if we view the entire story, the other half of the circle shows us that we have been programmed to embellish our human bodies with animal bodies.

It would be easy to wash our hands of the issue, sit back down and say, "That's just the way the world works," but it doesn't have to be this way. There are so many incredible vegan designers out there who are making a stand for those who do not have voices. I can't promise that I will never own clothes made from animal products (as there are already some hanging in my wardrobe) but I can aim to make the conscious decision to buy more cruelty free clothes.

More like this
5 “Ugly” Fashion Trends Halsey Makes Look Chic
By Allie Fasanella
Ciara Is Just Getting Started In Fashion
By Dominique Norman
9 Celebrity Couples With Matching Tattoos
By Jordan Murray
Yes, You Can Buy Off-White’s New Beauty Range In The UK
By Tomi Otekunrin
Get Even More From Bustle — Sign Up For The Newsletter