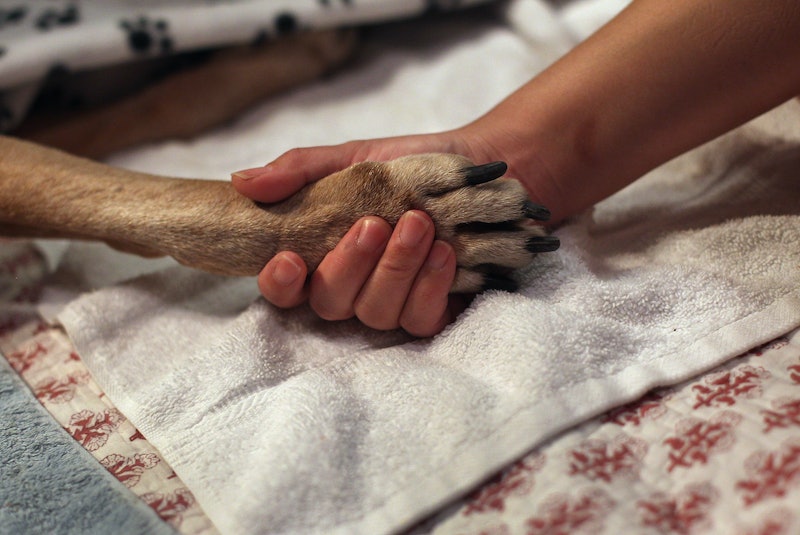 Pop quiz: Do you like people? How about pets? Would you say that you care about pets more than people? If you answered yes to that last question, you're not the only one — and what's more, there's a scientific reason for your response.

Take these two stories, for example:

One summer day in Idaho, Craig Jones left his black Lab mix Arfee in his car with the window rolled partly down to keep cool while he went out for lunch. When someone called the police to complain about the barking, the officer, who claimed the dog lunged at him even though the window was mostly rolled up, gave Arfee a fatal gun wound.

If this story makes your blood boil, join the club. Now try this story:

On the same day in July 2014, also in Idaho, police shot and killed Jeanetta Riley, a pregnant mother of two, outside a hospital. The cops said she was drunk and swinging a knife at them, though they could have also used a non-fatal Taser and footage shows she was ten feet away when they fired.

If this story made you less upset than the first one, you're still not alone.

According to psychologist Hal Herzog, people tend to respond more emotionally to the senseless killing of pets than to that of humans. The media was in an uproar after Arfee's killing, while Riley's was barely even covered (though unjust cop shootings have lately been in the news — I'll get to that). Herzog cites two studies to establish this contrast as a larger pattern. In one, different participants read different fake news stories describing the same beating of an infant, an adult human, a puppy, or an adult dog. People reacted with the most distress to the infant, then the puppy, then the adult dog, then the adult human. In another study, 40 percent of people said they would save their dog from an out-of-control bus before saving a stranger (though that's still less than half and, in my mind, surprisingly low given that 90 percent of pet owners consider their pets part of their families).

Why do we exhibit these disproportionate reactions? The authors of the study featuring the different beating narratives conclude that people's sympathies increase with the innocence and defenselessness of the victims.

In my opinion, the impression that the perpetrators of the crime are discriminating against a group may also amplify people's reactions. While Jeanetta Riley was a white woman and her shooting was not depicted as a manifestation of societal prejudice, people have been rightfully up in arms about the recent police killings of Mike Brown, Eric Garner, and other African Americans because they are part of a larger pattern of racial injustice. Similarly, people may find violence toward animals more disturbing because animals do not have the same rights as humans and animal abuse often goes unpunished. But the fact that some people value animal lives at least as much as human lives isn't the crazy part. Scientists agree that animals have emotions and can feel pain. And while not all species have the same cognitive abilities, animal rights activists — most notably Peter Singer — have advocated the approach espoused by philosopher Jeremy Bentham: "The question is not, Can they reason? Nor can they speak but, Can they suffer?"The truly hypocritical part of this tendency, Herzog points out, is that our sympathies toward abused animals only extend to the animals we typically bond with as pets.

We share the earth with roughly 40,000 other kinds of vertebrate animals, but most of us only get bent out of shape over the treatment of a handful of species. You know the ones: the big-eye baby seals, circus elephants, chimpanzees, killer whales at Sea World, etc. And while we deeply love our pets, there is little hue and cry over the 24 horses that die on race tracks in the United States each week, let alone the horrific treatment of the nine billion broiler chickens American consume annually.

Most people, it seems, live easily with what the environmental philosopher Chris Diehm calls “the paradox of the cats in our houses and cows on our plates.” Go figure.

Perhaps we can apply our sympathy toward Arfee and the hypothetical dogs in the studies to other, less pet-like animals that have virtually the same capacity to suffer — and often do suffer at our hands.