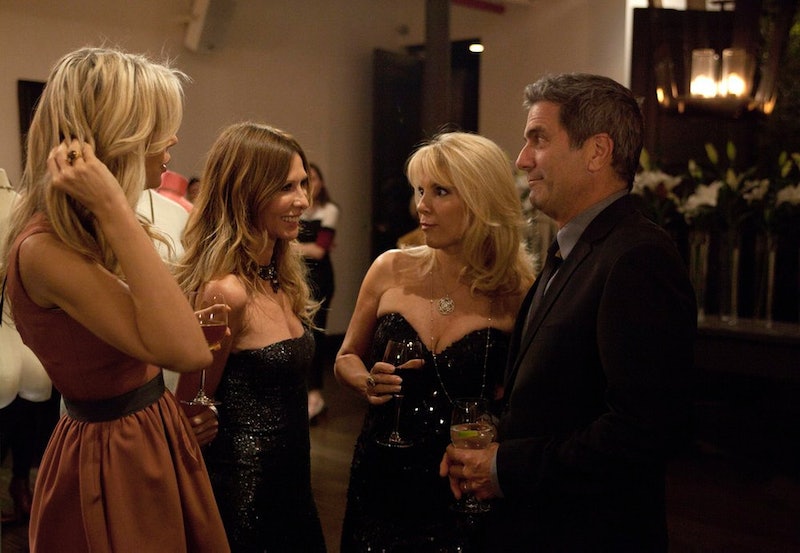 Just because this is something we see all too often doesn't mean it ever gets any easier. Another married couple has incurred the wrath of reality television. Yes, Real Housewives of New York City star Ramona Singer and her husband of more than 20 years Mario have decided to get divorced. But what happened between Ramona and Mario to make them go from oozing romance on screen to a very public and a very nasty break-up?

It all started — in the public eye at least — with an October 2013 report from Page Six that alleged Mario had been having an affair with a 20-something he met that summer in the Hamptons. The report went so far as to say that the woman got pregnant and that Mario paid for her to have an abortion. The Page Six story was reportedly the first time Ramona had any knowledge of the affair.

Any RHONY fan would immediately have flashbacks to Season 4 when a psychic told Ramona that her husband was going to be unfaithful to her during the ladies' trip to Morocco. This is one fortune I wish didn't come true.

Well, if there was trouble in paradise, Ramona and Mario sure didn't show it. Season 6 of RHONY was filmed during the summer of 2013, when Mario's rumored affair had taken place, yet the couple seemed as in love as ever as they saw their only daughter, Avery, off to college to start her freshman year at Emory University. Ramona and Mario spent New Year's Eve and New Year's Day together, a source told PEOPLE. Amidst these rumors, Ramona continued to post photos of herself, Mario, and Avery on Instagram, as if nothing was wrong.

But soon this would all unravel. In late January 2014, Page Six reported that Mario and Ramona had separated, though neither of them had confirmed this at this point. Ramona had reportedly kicked Mario out of their Upper East Side apartment, but she somehow ended up at their Southampton home where Mario had been splitting his time. She found Mario there with his girlfriend, now identified as 27-year-old Kyle "Kasey" Dexter, and Ramona reportedly called the police. Ramona was also rumored to have told the police that Mario had choked her, although there are conflicting reports about this.

Soon after the news broke, Ramona filed for divorce from Mario, but just a few months later, it looked like the couple was going to try and make it work. In April 2014, E! News reported that Ramona and Mario had reconciled and were living together again while working on their marriage. Still, Ramona was not feeling Andy Cohen's questioning about anything having to do with her and Mario during the RHONY Season 6 reunion. Yeah, it was awkward. Unfortunately, that didn't last too long. By July 2014, Ramona had kicked Mario out of their home once again, and she announced the split in August, according to PEOPLE. Though the couple seemed to be making progress after three months of counseling, Ramona alleged that Mario had been in contact with his mistress once again, and Ramona decided to end things once and for all.

Now it's like a whole new Ramona on Season 7 of RHONY. In last Tuesday night's season premiere, Ramona said Mario had wanted her to be hush-hush about the whole ordeal, but she vowed that she wasn't going to be silent any longer, opening up to her castmate Sonja Morgan, even if her close friend just used it as an opportunity to talk about breaking up with her ex-husband a few years ago. But still. Go, Ramona! That's the Ramona I know and love, using that confidence, strength, and knack for saying whatever's on her mind on her own terms to stand up for herself and become her own woman. I totally high-fived Ramona through the TV screen during the episode. I hope she felt it.

Apparently, we might even see a softer side of Ramona this season. On Tuesday night's upcoming episode, it looks like Ramona ia actually going to apologize to fellow cast member Luann de Lesseps, whose marriage and parenting skills Ramona has insulted in the past. Ramona hardly ever takes responsibility for how other people perceive all of the craziness that comes out of her mouth. Man, divorce really has changed Ramona. But, it's definitely for the better.