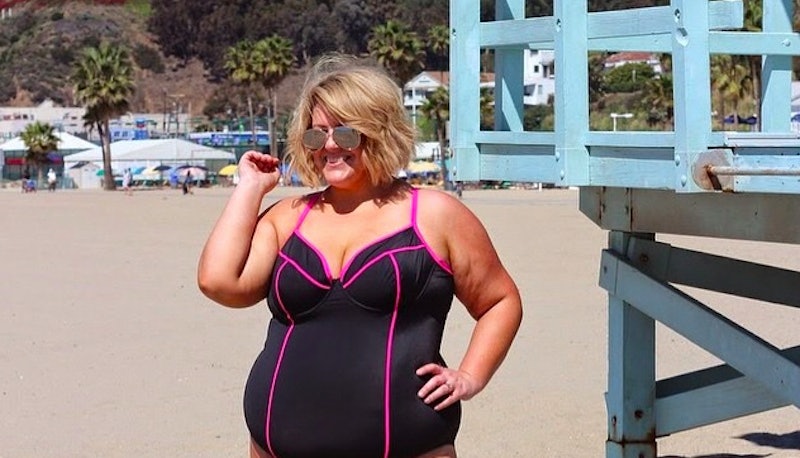 Plus-size fashion queen Jessica Kane posted a photo on her Instagram that had me feeling all kinds of feels before I even had my morning smoothie. Ever since Gabi Gregg snapped the selfie that inspired the whole fatkini movement, the Internet has seen a veritable flood of photos of women in plus-size bikinis and bathing suits. We've lauded them as being brave for showing their stigmatized bodies and for choosing to wear what they want. But are we wrong to do so? Kane's Instagram post asserts that she doesn't see herself as brave:

THIS WAS NOT BRAVE. I've been told how brave I am for not having a coverup, but going without a wrap would only take bravery if I cared what others thought of me, but I don't. I spend my time worrying about things I CAN control and this day, I was only thinking about how fab I felt and how much sun I was catching. Things that DO take bravery? A family battling tragic illness, a mother trying to beat addiction, a person trying to break free of domestic violence, reaching out for help when you have already planned your suicide and feel like you can't breath one more day. THAT is brave. Not wearing a swimsuit at the beach. LIVE life and only worry about what really matters.

While my immediate reaction was, "No, girl! You're so wrong," I've seen firsthand how women sharing photos of themselves online has helped other women find their own bodies beautiful and inspire them to rock the exact kind of bathing suit that they want to the next time they hit the beach. Hell, I'm totally one of those women who's been inspired by these selfies myself!

I've felt the rush of being "fat in public" in a cute as anything two-piece and feeling like I was getting away with something. It very much required a bit of bravery. Once I thought about it and re-read what she wrote though, I started to agree with her. Yes, wearing a fatkini or even just being out in public fully clothed can still require bravery but it also requires a healthy dose of not caring what other people think — just like Kane says. That doesn't mean it's easy, though. And I don't think that's what Kane is implying, either.

Fat shaming is something we're talking about more, and its antidotes — body positivity and size acceptance — that used to just hang out in the corners of blogs and Tumblr are becoming widespread concepts in the mainstream. However, making fun of or shaming people for the way that they look is definitely not as dead as it needs to be.

While plus-size women's visibility and acceptance is becoming the norm online, in real life it can still be a different story. Just a few weeks ago, we saw how cruel people can still be when it comes to fat people daring to just exist and have a nice time with the now famous "Dancing Guy" case, in which a fat dude was shamed for dancing at a concert. Just last night at the movie theater, I saw some guys laughing at a plus-size woman. So if you feel insecure in public, I totally understand why, and I think it's valid.

It takes time for those body-positive messages to sink in, and it can take even more time to actually realize they apply to us. The desire to wear something cute, things that we're told that plus-size women shouldn't wear, has to be pretty strong to risk ridicule — especially if we live in a rural area or smaller town where we'll feel like we're sticking out even further.

I get it. It takes bravery to put yourself out there and defy years, maybe decades, of negative messaging about our bodies. We might not want to care what other people think, but when fat people are mocked and made into memes and jokes it's a fair fear to have. This is where I can appreciate Kane saying that she doesn't care what people think and that she doesn't feel brave for simply deciding to exist out there on that beach. As someone who's been visibly plus-size and works in the plus-size industry, she's likely internally normalized being plus and is an old pro at handling trolls and other rude folks. Not to say that anyone is ever immune from insecure days, but it definitely helps the everyday self-esteem to be surrounded by body positive babes!

Most of all, this is frustrating to me because I agree with Kane — in the scheme of things people are dealing or struggling with, wearing clothing shouldn't have to be something that we applaud people for. I dream of the day when this is so normal and so common that it's not even on our radar anymore. I think we're getting there! But, the reality is that it does still take courage for a lot of people to do simple daily things like going to a concert or the beach. Until it becomes normalized, just imagine me here silently cheering you on, babe.