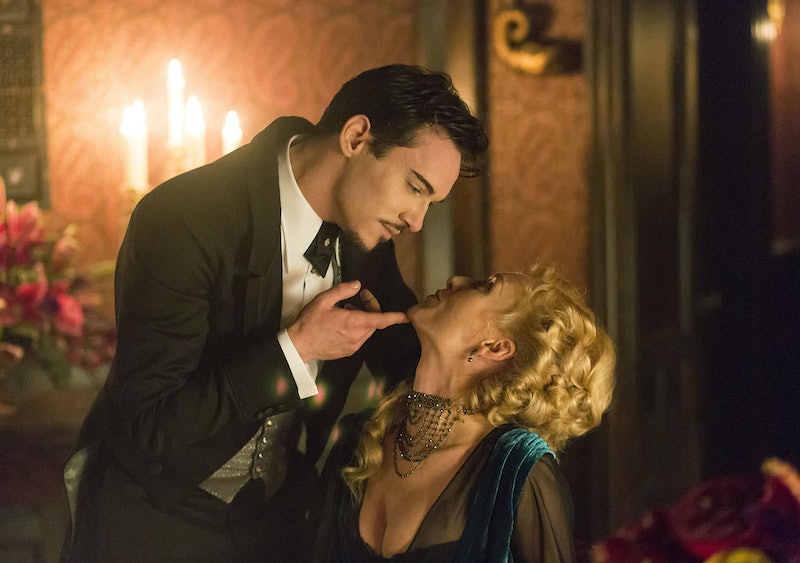 Friday nights on NBC: Consider yourself drenched in horror. To follow its TGIF (not associated with the incredible ‘90s Friday night lineup, le sigh) hit Grimm, about a supernatural detective of sorts, the Peacock has dreamed up Dracula , a drama about that vampire we read about in high school now that those Twilight nerds have worn out their welcome. Huzzah.

Of course, this version stars former Tudors monarch Jonathan Rhys Meyers as the titular vamp and takes the well-worn vampire tale on a fantastical, literature-defying journey. And while the press materials for the series would tell you that Meyers’ Dracula is a scientist seeking the “new, exciting” development that is electricity while seeking revenge for the guy that made him immortal while some annoyingly infatuating lady distracts him with her sweet, sweet blood. Plus, we know it’s sophisticated because it’s produced by the same people behind Downton Abbey. Duh, British = sophisticated.

But if you watch the trailer for the series, you’d think it’s just True Blood: Old Timey London Edition. There’s sex, necking, and a whole lot more sex. And apparently, in between all that, Dracula finds time to do… science. Or something. Naturally, this series left us with a series of very, very important questions.

Why Does The Sex Have to Be Vampire Sex?

The vampire trend has kind of run its course, in case no one else noticed. It’s all about post-apocalyptic girl power right now. Plus, in all the years where vampires ran rampant through pop culture, controlling the conversation like a million blood-sucking Kris Jenners, no one ever thought to focus on the oldest vampire there is: Bram Stoker’s Dracula. Why? I’m going to go with the fact that Dracula, a required text in most high school and college English curriculums, inevitably reminds us of school. And school is the last place we want to be when sexy Dracula comes around.

But beyond that, Meyers’ Dracula is a sexy scientist. Why not go out on a limb (instead of the broken, dangling tree branch that is vampire culture) and introduce us to a brooding scientist with a dangerous dedication to the art of… science? (Forgive me, I was an English major.) See? There’s so much we could learn from Meyers, the Science Hottie. Besides, if True Blood is losing its license to peddle vampire sex on HBO (where they can actually show the dirty bits), how the hell is a network show supposed to compete? NBC, there’s still time. Just give us Sexy Scientist. I’ll watch. For the science. And my brain. I promise.

Is Jonathan Rhys Meyers actually Dracula? Is this a reality show?

Seriously. This guy does not age. He looks just as flawless and smoldering as he did on the first episode of The Tudors in 2007. So, he’s actually a vampire, right? Otherwise, what kind of deal with the devil did this guy make? Wouldn’t we all love to be famous for our flawless skin and sexual magnetism? (And science. Don’t forget about the science.)

Does the woman in Dracula's life do anything besides lay about languorously and get in the way?

Minna, a.k.a. the woman who Dracula thinks resembles his dead wife, lies about sexily in the Dracula trailer. In the show's official synopsis, she's a pest in his quest to get revenge for becoming immortal. And in the show's official images, she rocks an up-do that reminds me how much I hate bobby pins. Does she do anything else? Can she be a scientist too? Please?

Do you know about American Horror Story?

While the vampire trend may be running out of steam, the horror-on-TV trend is ramping up thanks to the success of Ryan Murphy’s blood-curdling FX series American Horror Story. Still, the thing about American Horror Story is that the series traverses seldom-explored territory – like New Orleans voodoo and witchcraft history on Coven . What are you bringing to the table, Dracula? The hot, new late 1800s trend, light bulbs? Cravats as far as the eye can see? The deep, often haunting pools of darkness that we sometimes refer to as Jonathan Rhys Meyers' eyes?

AHS has a Minotaur, voodoo fertility rituals, and a terrifying New Orleans torturer and murderer from the 1800s making sandwiches at a school for young, rambunctious witches. You’re going to need to show us some goods, NBC.

Are you trying to confuse us?

According to NBC, Dracula actually has three names: Dracula, Alexander Grayson, and Vlad Tepes. This is a Friday night show being sold on the point of vampire sex. Do you really think we’re going to have enough energy to follow a guy with three different names?

Tell us the truth: Real eyebrows or implants?

I mean, look at those things. They look like they could command a room on their own. Meyers could probably lean back and let them do the acting and we’d probably still be eating right out of his hand.

Just checking: Are you sure you want to do a show about vampires?

NBC, you have a lot of really great and original programming on your network, from the beloved Parenthood to the undoubtedly unique Parks and Recreation. Do you really want to add Dracula to your plate? You guys do know that the only reason The Vampire Diaries was able to do a vampire spin-off (The Originals) is because TVD fans are nutty for Joseph Morgan, right? Are you sure you don’t want to swap the blood sucker for a teenager with inexplicable super powers? Or an anti-hero who turns to the dark corners of the universe because he loves his family so much? How about that guy’s lawyer?

We’re really hoping this one works for you, NBC. But I’ve got to say, this tardy leap to vampires really furrows my brow.

For the answers to (some of) these questions, you can watch Dracula on NBC tonight at 10 pm.