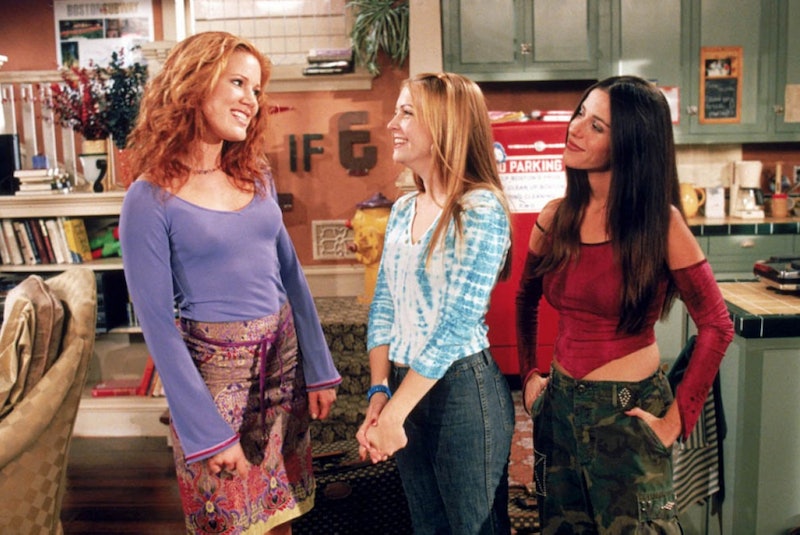 Alright guys: Let's talk about our favorite teen witches from fiction! In a recent interview with Today, author J. K. Rowling discussed the possibility of more Harry Potter . Although it seems clear that she's not working on the eighth book at the moment, you'll all be delighted to know that she hasn't quite shut the door on the Harry Potter series yet. The vague news about the mere possibility of a new Harry Potter book got me all excited like a kid on Christmas day, so I decided to watch the first movie for the hundredth time.

I know I am not alone in my love of all things Harry Potter . Even after seeing the film this many times, I still become absolutely immersed in the magical world. It wasn't until Hermione Granger appeared in Harry and Ron's Hogwarts Express coach that the cogs in my brain started turning, though. I couldn't help but wonder, "What would she be doing now?" The cogs kept whirring and I wondered, "What would all of my fave teen witches be up to now? Where would they shop and what would they wear?" I just needed to know, okay?!

Which brings me to this article... The contents of my brain and its crazy imaginings are here to answer all of those need-to-know questions like, "Is Mildred Hubble still The Worst Witch around?" So put your feet up and grab a pack of Bertie Bott's Every Flavor Beans... Although you may want to pick out the earwax-flavored ones first.

Sabrina was the ultimate teenage witch and my personal style icon of the '90s. She was so awesome; she had a talking cat, a magic finger, and a dreamy boyfriend. Although she (just about) managed to balance being a witch with the trials and tribulations of being a teenager, in my eyes her downfall was that she was always trying to change herself and fit in. So with that fact in mind, I think Sabrina would have reached her mid-twenties and (like most of us) had an identity crisis. Bearing in mind that the series started in 1996 at the dawn of Sabrina's sixteenth birthday and ended in 2000, if my calculations are correct, she would now be in her early thirties.

By now, Sabrina has accepted her witchy heritage and uses it to her advantage. As witches and wizards have mainstreamed now, it makes it a lot easier for Sabrina to fit into modern society. After the success of Sabrina's Secrets Magazine — which came accompanied with hair and beauty products — she now runs her own magic beauty company Bewitching Beauty and lives in New York. Her company was such a huge success (in particular her Zit Be-Gone! Cream and Chameleon Color Change Eyeshadow products) that she is now a self-made millionaire and sends her aunts on a cruise every year to thank them for teaching her everything she knows. Sabrina loves fashion and enjoys the whole shopping experience, so she regularly frequents Macy's and her favorite brands are Michael Kors and Ralph Lauren.

Clever clogs Hermione definitely went to university and eventually received her PhD in Transfiguration. She specialized in Cross-Species Transfiguration and is currently a part of a research team that is trying to elongate the effects of the Polyjuice Potion. She is currently engaged to Ron and they are getting married this summer. However, unlike her real-life counterpart Emma Watson, Hermione's forte is definitely not style, and she is dreading having to walk down the aisle with everyone staring at her. However, her good friend Ginny Weasley, who has a better eye for these things, managed to get her mum to design a similar style dress to a Jenny Packham gown that the girls fell in love with.

Hermione does not have the time to waste precious hours in stores so she shops online. She tends to stick to high street e-retailers who she is familiar with and orders from ASOS on the regular.

After gaining an artistic scholarship to study at Weirdsister College, Mildred graduated and was welcomed back to Miss Cackle's Academy for Witches as the new art teacher. There was uproar from an aging Miss Hardbroom but Miss Cackle and Miss Drill fought Mildred's corner. She is viewed as somewhat of an eccentric by her students but they all admire her artwork and her ability to bend the rules every now and again. Mildred is not a huge follower of fashion but she loves vintage, especially anything from the '60s and '70s. That being said, she is a fan of Rodarte and has a few key pieces from the couture designer.

Mildred Hubble's bitter rival, Ethel Hallow is still as prim and proper as she always was. Proving from a young age that she could train her kitten Nightstar to sit pretty upon her broom whenever she desired, she decided to turn this natural ability of hers into a business. After graduating from Weirdsister College, she started her own business in familiar training: Hallow's Familiar Etiquette Academy. Her academy is located on Diagon Alley, which is where she met Draco Malfoy. She dumped him after she found out about his involvement with He-Who-Must-Not-Be-Named. Of course, Ethel is super stylish and likes to show off her family's wealth, so she can often be spotted in Chanel, Burberry or Prada — only the best for Ethel!

Quite the lovable eccentric, Luna always seemed to prefer the company of creatures rather than people. Ron put Luna in touch with his older brother Charlie Weasley who works with dragons. Luna has been traveling with Charlie and his team and they were last heard of in Romania. Luna is an eco-warrior and hardcore vegan. She gets most of her clothes from thrift stores but when she comes across an Internet connection, she will occasionally treat herself to a piece from Free People or Stella McCartney.