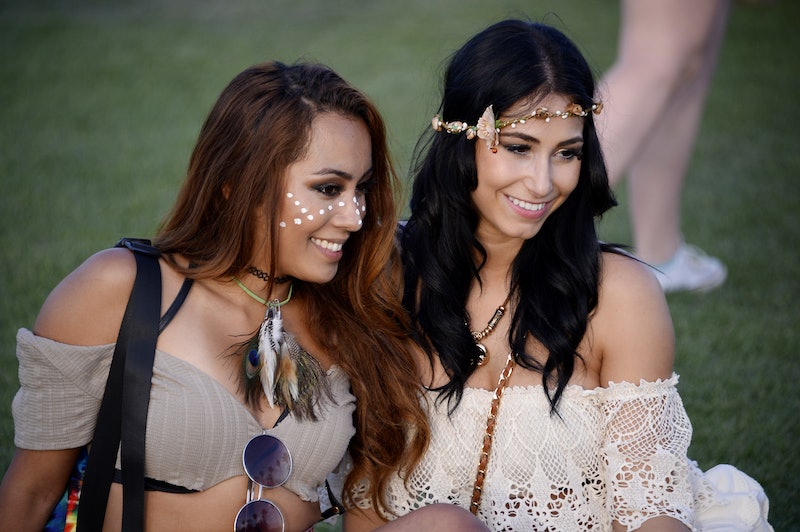 It's well-known by now that Coachella is a scourge of humanity. Between all the drunk bros in neon sunglasses and girls co-opting Native American traditional garb to make a fashion statement, Coachella is a 3-day hell on earth, now available over not only one, but TWO weekends. You might think I'm being overly judgmental but I've been to Coachella, so I've seen first hand the ultimate levels of dick-baggery that goes on there. Approximately three people are there to actually see music, while everyone else is there just to be seen. Cue the influx of celebrities, and you've got yourself a real scene. If you're still in doubt, the most popular Coachella Instagram posts prove, indubitably, that Coachella is just an exclusive club filled with self-important celebs who think their contribution to humanity is at the apex of importance, albeit being in the middle of the desert.

Mashable reported, via Instagram's stats, that 83 million Coachella-related interactions happened on Instagram during the first weekend of the festival. It makes sense: More fashion parade than anything else, the ultimate question associated with Coachella isn't "what bands should you see at Coachella?"—the real question is, "what should you wear to Coachella?" And while I've got nothing against outfit planning, I'm a giant lover of live music. Being part of a whole crowd of people jumping up and down to the same music, singing the same lyrics, is an amazing dopamine rush. Standing around in a crowd of people posing in designer wear while a band plays in the background doesn't exactly have the same je nais se quois. Here are the most popular Instagram posts surrounding Coachella, which should give you some idea of what Coachella is like if you're rich and famous:

3. Nash Grier who was just Instagraming that he was planning to go to Coachella (443k likes)

4. Nina Dobrev, who also didn't go to Coachella but who, like Miley, cashed out on the hashtag (419k likes)

5. Miley Cyrus, who didn't even go to Coachella because she was hanging with a horse (416k likes)

Meanwhile, the festival also saw its major art installation called "Caterpillar's Longing" by Poetic Kinetics, a giant caterpillar which disappeared half way through the festival only to re-emerge as a butterfly on Sunday morning, receive a lot of attention. Supermodel Alessandra Ambrosio's post of the butterfly has received 160k views, although I'm guessing that has more to do with the Victoria's Secret Angel than the art project:

Mashable reported that the main filters used were (in order), Ludwig, Crema, Slumber, Amaro and Valencia, which is sad for Valencia, which used to be everyone's number one. WHAT CHANGED? Lastly, I'll leave you with a photo of me that you didn't ask for, at Coachella 2011. It got one like on Facebook.