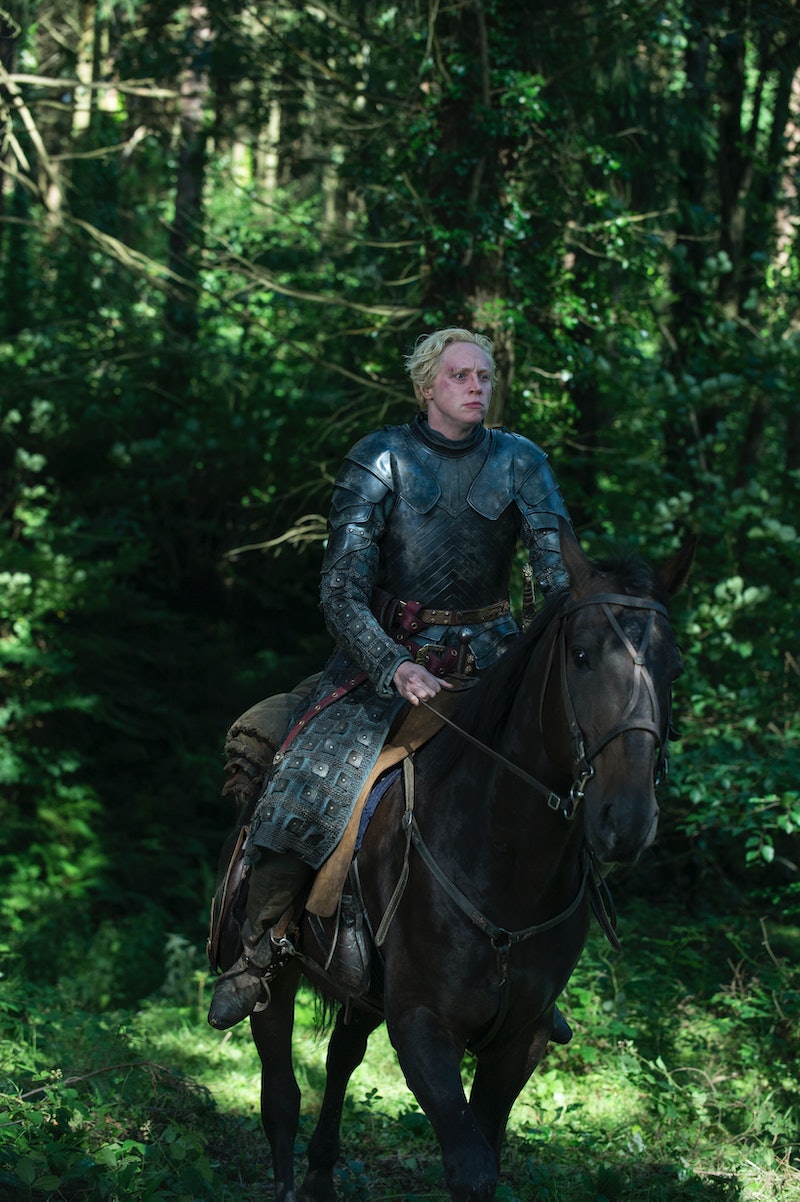 I love this time of year. All I want to talk about is Westeros, all of the time. This season is all about characters who have never met colliding — do you think Brienne might kill Stannis on Game of Thrones to avenge Renly Baratheon, who Stannis and Melisandre murdered back in Season 2 of Game of Thrones? She is the only living witness to his death, and could take Stannis down. How could would it be if Brienne showed up at the wall? I would love to see what Jon Snow and the Night's Watch thought of her and Podrick. Her interactions with Gilly would be amusing too. They're both so blunt, but in different ways.

Brienne has had some bad luck of late on the HBO series. In last season's finale, after the cutest heart-to-heart ever, Arya Stark refused to go with her and ran away. All Podrick Payne had to do was take out Hot Pie's loaf of bread! He really screwed up. Then, in the season premiere, she expressed her doubts of purpose to the "squire" while unbeknownst to the two of them, Sansa Stark was passing by in a carriage. It was sad, actually, to watch the mighty Brienne of Tarth experience such an existential crisis this poor kid. Brienne may not be a knight and Podrick might not be her son, but that doesn't mean they couldn't both use a friend.

You'll remember that we met this character when Brienne pledged herself in service to Renly Baratheon. That's how she met Catelyn Stark in the first place. Renly was killed by the Shadow that Melisandre birthed after her rendez-vous with "the true King" Stannis Baratheon. Brienne noticed that the Shadow kinda looked like him. Now that both Arya and Sansa seem out of reach, could this become Brienne's new mission? Her sword may be "oathkeeper," but her oath to Lady Stark wasn't the only one that she made.

In the A Song of Ice And Fire books, Brienne of Tarth remains committed to finding Sansa Stark and is taken captive by the Brotherhood Without Banners. What happens to them there (it's a major book spoiler that won't take place in the series) takes them in an altogether different direction that does not involve Sansa or Stannis. As for Stannis, he was presumed dead at the end of the last book in battle, but according to an online chapter of The Winds of Winter he is as alive as ever. So, this could be seen as a major departure from the books.

However, the Brothers practice the same religion infused with magic that Stannis, Melisandre, and her followers practice. Remember on the show when Arya was staying with the Brothers and Stannis' party passed? The youngest Stark girl was not buying what Melisandre was selling. It also means that the Brothers Without Banners could be on the way to the Wall, and some scenes from the book could ultimately make an appearance.

Frankly, I would love it most if Brienne took down that red lady herself. I am over her weird life and her weird religion. I am over how everyone seems to ignore that she is clearly pulling all of Stannis' strings. She's the real murderer here, and I think Brienne is smart enough to figure that out if she turns up at Castle Black.

If this is the case for Brienne, then Renly truly is making a mark on this season of Game of Thrones. You could easily draw a parallel between Brienne's downtrodden scene with Podrick and Loras Tyrell's nihilist, lackadaisical attitude toward to his sister and their duties at King's Landing. He's clearly given up as well. Both Loras and Brienne are clearly still feeling that loss. I like that Game of Thrones, which has so many revolving characters and locations, doesn't forget a thing. It makes the world feel that much more real!