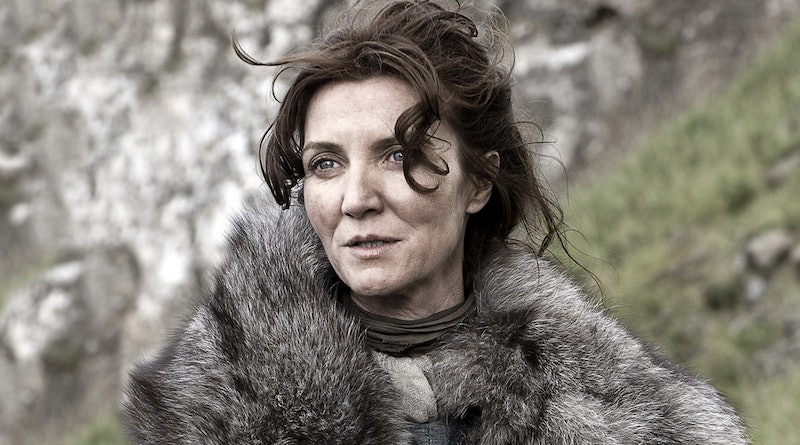 Quit playing games with our (stone)hearts, David Benioff and D.B. Weiss. For two years fans have longed to see Lady Stoneheart make the leap from the page to the screen, but the Game Of Thrones showrunners have yet to acquiesce to our request. Viewers first thought she might be introduced during the Season 3 finale, as a bit of a salve after the harsh burn of the Red Wedding. When that didn't happen, focus shifted to the Season 4 finale, which viewers thought her debut would be the perfect button on a stellar season. When she still didn't make an appearance, fans were outraged. So what's the deal? Is she out for good? Or might she still pop up at some point when we least expect it?

(Needless to say, you should only continue reading this article if you know who Lady Stoneheart is — or if you really don't care about spoiling one of the coolest reveals of the books, I suppose.)

The cast and crew of Thrones have been expertly mum when it comes to details about the vengeful reanimated corpse of Catelyn Stark. Has she been excised completely? Are they saving her reveal for later in the game? We're starved for answers, and none seem to be forthcoming. Naturally, a fan asked this very question at the show's Comic Con panel last month, and not only did Benioff & Weiss hem and haw around the answer, they outright refused to address the Lady Stoneheart question.

Catelyn actress Michelle Fairley hasn't helped ease viewers' fears with her caginess around her character's resurrected alter ego — although it's important to note that she has so far stopped shy of outright stating that Stoneheart has been cut. When asked about the disappointing lack of Cat-zombies in the Season 4 finale, Fairley responded:

Yeah, I knew [there'd be no Lady Stoneheart]…. They’re wonderful books, but you can’t put everything in the TV series.

Okay, so she knew Lady Stoneheart wouldn't be in that particular episode. And sure, we all know not everything will survive the transition from page to screen. But Fairly doesn't say no Stoneheart ever. Similarly, when the director of the finale, Alex Graves, was asked the same question, he responded similarly cryptically:

I don’t think there was room for it this season. I don’t know what they’re going to do about it, because it is certainly something people attached to.

Did you hear that, people? "This season." "This season!" As a director and not a writer, he admits to having no way of knowing Benioff & Weiss' ultimate plans regarding the character... but he certainly doesn't seem to be telling us to give up hope entirely. Maybe we're reading too much into things, but it seems to us that if Lady Stoneheart had really been cut completely, Benioff & Weiss would put us all out of our collective misery and just say so. All of these non-answers and evasions just make us seem like they're being cagey because they're reserving the character for later use.

And that's probably the smart decision, anyway. It's true that, while the idea of a revived vengeance-seeking Catelyn is exciting, George R.R. Martin hasn't done much with the character yet. She has appeared in a grand total of two scenes so far: once in the epilogue of A Storm Of Swords, and once in A Feast For Crows — she didn't appear at all in A Dance With Dragons, and it's unclear what Martin's future plans are for the character, if he has any. With so little material in the books for her, it makes sense for the show to save until the last possible moment so her storyline can have the maximum impact, instead of dragging her rather thin plot out interminably (like Dany's neverending trek through Slaver's Bay).

Thankfully, there are a couple of indications that point to an impending Lady Stoneheart appearance. Firstly, Benioff & Weiss took the trouble to introduce us to Beric Dondarrion in Season 3. Dondarrion is the leader of the Brotherhood Without Banners who kept being brought back to life by the red priest Thoros Of Myr. What would be the point of introducing the powers of resurrection if they didn't intend to use them on Catelyn? In the books, the Brotherhood comes across Catelyn's dead body after the Red Wedding, and Dondarrion gives his life so that Thoros can bring the dead Stark back instead. It's reasonable to assume that Thoros and his magic reviving powers were kept in for a reason.

Furthermore, Brienne is the only character who interacts with Lady Stoneheart, and the show has almost caught up to that part of her storyline. While on her search for the Stark girls, she crosses paths with the Brotherhood and shocked to find Catelyn (semi)alive. Stoneheart is enraged to see that Brienne is carrying a Lannister sword and following Jaime's orders — she assumes the woman has betrayed her oath to Catelyn and orders her to either kill Jaime or be hanged herself. It's a dramatic moment (and definitely the most exciting thing to happen to Brienne in A Feast For Crows), and it would be a pity to see it go to waste. The fact that Brienne has almost no material left from the books to adapt to the show hopefully indicates that they plan on introducing Lady Stoneheart in Season 5 — if they don't, what on earth is Brienne going to be doing all season?

Everywhere Lady Stoneheart goes, she leaves a trail of Freys hanging from trees in her wake. So if Season 5 begins with a cold open involving a Frey being hanged in a forest by a mysterious cloaked figure, then you know we're in for a zombified treat.