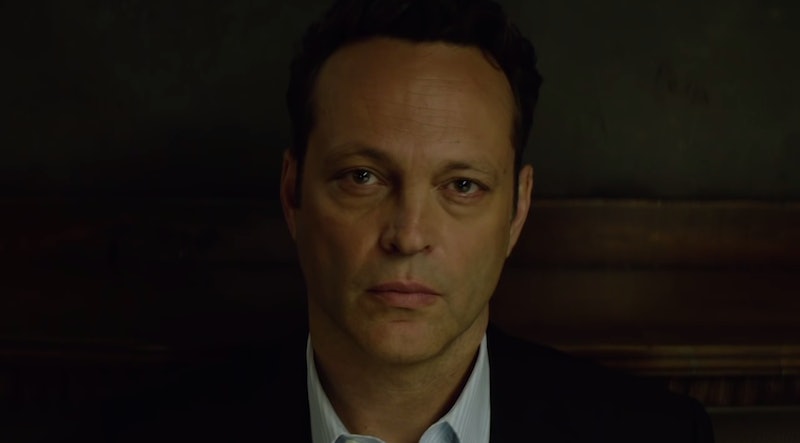 Usually, once a season of your favorite show is over, you have some idea where the show will be going next season. However, (and sadly for fans), this is not the case for True Detective Season 2's mystery. After the last season, knowing we'd abandon our main characters, I had no idea what to expect aside from a fair amount of moodiness and a mystery.

Luckily, with the new season fast approaching, we know a good bit more than we did at the end of Season 1. While the stars — Rachel McAdams, Vince Vaughn, Colin Farrell, Taylor Kitsch — have been solidified for a while, the actual mystery taking place has remained (fittingly) elusive. We know that Vaughn is the villain, while McAdams, Farrell, and Kitsch are the detectives working on the case. We know it takes place in California, and that we'll be able to watch on June 21.

The teaser, which was released last week, doesn't give much away except that there will be more violence, secrets, and emotions (and also that Rachel McAdams will be playing a total badass). It's clear that HBO doesn't want to reveal very much about the story, as it is a mystery after all. I doubt we'll learn a whole lot more than we know now before June. However, here's what fans can probably guess from what we know so far: the central mystery surrounds the shady California transportation industry and the businessmen behind it.

According to some previously released spoilers, the show opens on a gruesome murder scene. Ben Caspar, a corrupt businessman who was working on an important transportation deal, is dead with satanic symbols etched on his body. We are then introduced to Ray Velcoro (Farrell), a morally dubious detective, Ani Bezzerides (McAdams), a detective who indulges in a few vices of her own, and Paul Woodrugh (Kitsch), a policeman and veteran. They come together, spar a little bit (spoilers have been clear that they are all pretty different, which means HBO will capitalize on that tension, as it did in Season 1 between McConaughey and Harrelson's characters), and eventually work together while exploring their own issues. They learn that Caspar had some unconventional interests, which leads the detectives to a massive orgy at some point.

Their detective work leads them to Frank Semyon (Vaughn), a businessman tied up with area crime who clearly knows something peripheral about the murder. If Vaughn were the main suspect, his character would probably not have been revealed. Though this might not all come to pass, it's all based on interviews with people involved with the show, much of which has been compiled at Den of Geek. I don't know about you, but I'm going to have a tough time waiting until June!