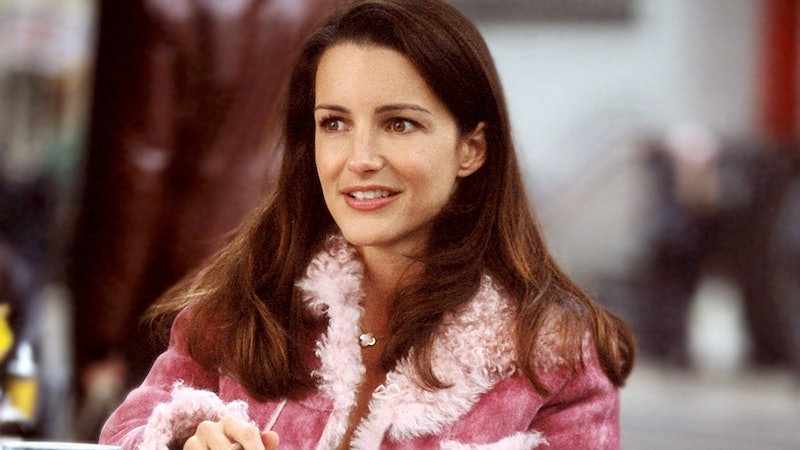 It's indisputable and undeniable: The ladies of Sex and the City had their fair share of dating disasters and heartaches. Throughout every peak and valley, the one character who seemed unremitting in her optimism was Charlotte York. Charlotte was the quintessential romantic, always quick to offer a smile and some words of reassurance even in the most hopeless of circumstances. Sure, Miranda's shrewd observations and candid honesty were much needed during certain situations, but Charlotte York's eternal optimism added balance to the girls' many pow wows.

Charlotte's positivity wasn't the result of countless successes in the dating world, though — quite the contrary! Dating was never smooth sailing for the SATC girls, Charlotte very much included. She was the first of the group to get married after a whirlwind romance with wealthy and handsome Trey McDougal. Sadly, the marriage suffered various pitfalls, including Charlotte's discovery that she had only a 13 percent chance of ever getting pregnant, and Trey later revealing he didn't want children.

Devastated, Charlotte didn't allow the loss of her marriage to dismantle her dreams of finding a soulmate. Not only did Charlotte find love again, the end of her marriage actually led her to the love of her life when she hired Harry Goldenblatt as her divorce lawyer. Harry may not have looked or acted the part of a "traditional" Prince Charming, but his unapologetic honesty, self-deprecating humor, and kind heart offered Charlotte a better storybook ending than she could have ever imagined — and she fantasized about that stuff a lot.

Let's dust off our rose-colored glasses and take a look at the things Charlotte taught us about romance and not giving up on love.

Even if a date resulted in something like the worst make-out session imaginable, Charlotte never let an opportunity pass her by. We've all had bad dates (if you haven't, I am officially super jealous of you), but even the most abysmal of romantic encounters can help us learn something.

We All Get Frustrated

Just because Charlotte was the resident optimist doesn't mean that she didn't get ruffled from time to time. Sometimes dating can get so frustrating it can make your "hair hurt."

A Breakup Isn't a Failure

Charlotte's first marriage ended in divorce. Although Charlotte herself seemed to initially view this as a "failure," she learned valuable lessons about herself and love — and, oh yeah, without the divorce, we would have never been privy to the Charlotte/Harry pairing that I personally enjoyed more than any other coupling on the show.

OK, try not to overanalyze. Believe me, I know it's hard! Just as she was the first to take chances in love, Charlotte spent more time thinking about the positives in her dating ventures than predicting the various ways things could go wrong.

Stand Up for Yourself and What You Believe In

Just because Charlotte pined for love doesn't mean she was willing to sacrifice her well-being for another person.

Along with being open-hearted during every romantic connection she made (and she made a lot of them — #gogirl), Charlotte was always a loving and caring friend. "Sex" may be the first word in the title of the show, but die-hard fans know that the focus on friendship was equally as important.

It may sound cliche, but love can truly come when you least expect it. Charlotte seemed to always be on the lookout for Mr. Right, but didn't actually find him until she had taken a breather from her endless search.

It's easy to feel disenchanted with the idea of romance, but remember that for every bad date and Trey McDougal, there may be a Harry Goldenblatt waiting around the corner.

More like this
Here’s What Happens To Bill & Frank In 'The Last Of Us' Video Game
By Brad Witter
'Brookside' Is Coming Back & Soap Opera Fans Are Going Wild
By Sam Ramsden
ITV’s New Take On 'Love Island' Is Only For MILFs & DILFs
By Sam Ramsden
Charlotte Crosby’s Net Worth Shows How Far She’s Come Since 'Geordie Shore'
By Darshita Goyal
Get Even More From Bustle — Sign Up For The Newsletter
From hair trends to relationship advice, our daily newsletter has everything you need to sound like a person who’s on TikTok, even if you aren’t.