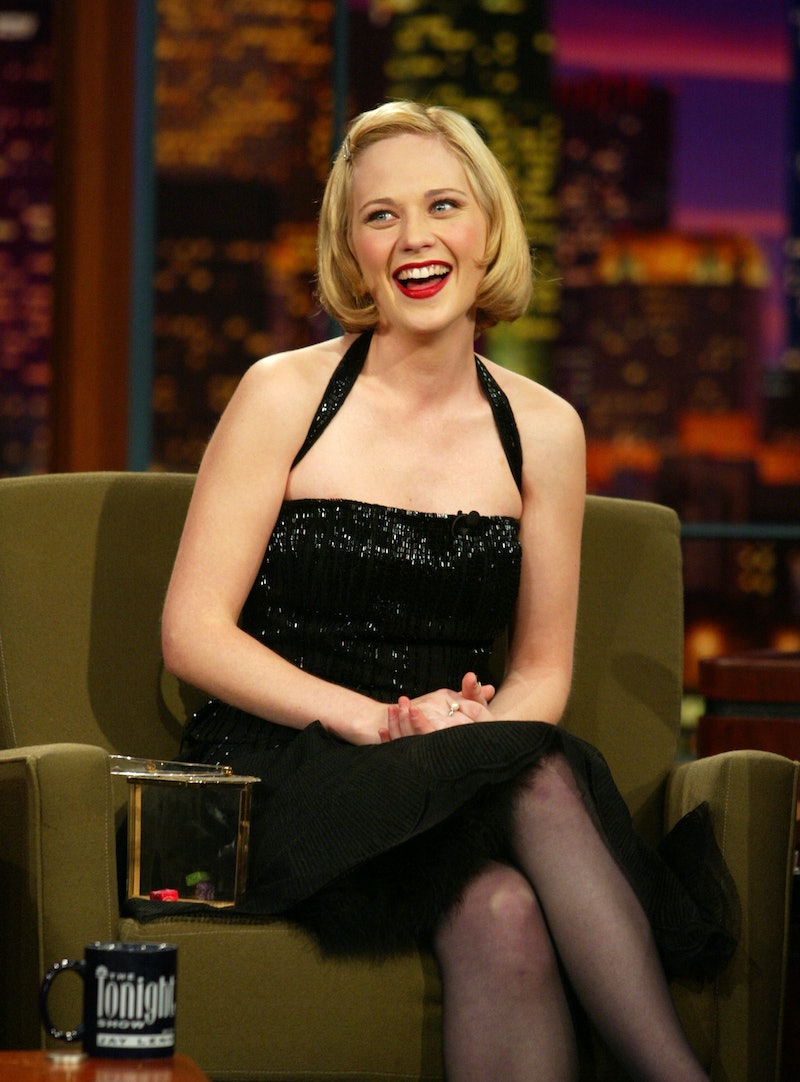 Don't panic, Zooey Deschanel fans, but there was a time when the big-eyed actress and singer didn't have her thick bangs and dark hair. Ten years ago, the movie adaptation of the beloved sci-fi series The Hitchhiker's Guide to the Galaxy starred Deschanel as a brunette, but it wasn't long before then that Zooey Deschanel lived life as a blonde. The film, costarring Martin Freeman, Sam Rockwell, Mos Def, Bill Nighy, John Malkovich, and Alan Rickman (as the voice of Marvin), had Deschanel as Earth woman Tricia McMillan (who goes by Trillian in space). She traveled the galaxy alongside other human Arthur Dent, alien-in-disguise Ford Prefect, and the President of the Galaxy — the two-headed Zaphod Beeblebrox, in the movie based off of Douglas Adams's radio show and books.

Although 10 years younger, Deschanel's look as Trillian in 2005 isn't far off from how she looks now in 2015. But the star of New Girl did experiment with her locks circa 2002. Her hair may have been light, but Deschanel's time as a blonde is usually considered as a dark period in her career. I happen to think the gorgeous Deschanel can pull off any hair style, but there's something particularly striking about her blue eyes and her rich, dark hair that has made up her iconic look in recent years. Plus, Deschanel herself wasn't a fan of the blonde, telling Allure magazine:

"I would literally wake up and see blonde hair in front of my face and I'd be like, Who am I?! When I got my hair back to brown, I remember my sister going, 'Thank God you're back.' . . . It was just weird for me."

At least she had her brown hair for The Hitchhiker's Guide to the Galaxy since according to Adams's book, Trillian is supposed to look "vaguely Arabic."

It's still troubling since Deschanel is as white as white can be, but her Trillian was better than the super blonde, sexed-up TV version portrayed by Sandra Dickinson back in 1981.

Deschanel hasn't been back to blonde since before The Hitchhiker's Guide in the early 2000s and most of her credits during that time aren't super impressive (with some exceptions). The world loves Deschanel as a brunette, but here's a ranking of all of her blonde roles, from worst to best.

NOTE: There are a range of blondes in the world, but I tried to focus on films where Deschanel was very light-haired. So, her blonde highlights in the The Good Girl didn't make the list.

Maybe because Katie Holmes was the "it" brunette gal in 2002 that Deschanel had to be the blonde one in the film Abandon. Deschanel portrayed Samantha, the college roommate of Holmes's Katie, whose boyfriend disappeared two years prior. With costars Charlie Hunnam and Benjamin Bratt, the film was panned by critics (it has a critic rating of 16 percent on Rotten Tomatoes). So even if Deschanel had been a brunette, it probably wouldn't have helped make the film any better.

Perhaps inspiration for the name of her own show New Girl, Deschanel was Nora in the film The New Guy. The teen movie had DJ Qualls as nerdy, high school student Dizzy who remade his image as cool guy Gil and landed cheerleader Danielle (Eliza Dushku being typecast). Deschanel stayed true to her quirky roots as Nora, Dizzy's friend before he changed his image.

Deschanel played Jenny Herk, the daughter of Rene Russo in Big Trouble. The comedy had an eccentric cast, including Tim Allen, Stanley Tucci, Ben Foster, Tom Sizemore, Dennis Farina, Janeane Garofalo, Andy Richter, and a not-yet-famous Sofía Vergara. Deschanel told Allure that she was forced to dye her hair for the film and said, "Actually, that was the first dye job."

Parks and Rec's Mark Brendanawicz (I'm sure he'd love being referred to as that), Paul Schneider, starred in the indie film All the Real Girls. His character, Paul, was a womanizer in a small town, until his best friend's teenage sister, Noel, comes back to town and he falls in love with her. Deschanel, who was 23 years old at the time of the film's release, played the teenage Noel in the well-received film.

As Jen in the "Kissing Cousin" episode of the long-running sitcom Frasier, Deschanel was radio producer Roz's younger cousin Jen, who liked to party and was very opinionated. Shockingly, a young person with views annoyed Kelsey Grammer's Frasier Crane in this Season 10 episode. Can't we all just get along over tossed salads and scrambled eggs? Plus, Frasier should know that Seattle is home to part of Deschanel's hipster demographic these days.

The made-for-TV movie musical Once Upon A Mattress starred Deschanel as Lady Larkin with her love, Sir Harry, portrayed by a pre-Glee Matthew Morrison. Since Disney brought this film version of the musical to TV and Deschanel was a lady in an old kingdom, her long, flowing blonde hair makes sense. (Plus, it was 100% a wig.) The cast was rounded out by Carol Burnett, Denis O'Hare, and Tracey Ullman.

Oh, how far these crazy kids have come. Jimmy Fallon was Deschanel's "Idiot Boyfriend" in his 2002 music video of his song. Fallon had been on Saturday Night Live when he released his album The Bathroom Wall, and though Deschanel was not as well-known, they both have continued to be silly while riding their success train.

Perhaps the only role where Deschanel's blonde hair is completely acceptable is the one and only Will Ferrell-starring Christmas movie Elf. Elf brought Deschanel — and her warm and jazzy singing voice — into the mainstream. As store employee Jovie, she accepted Ferrell's Buddy and helped him save Christmas. The lovable film helped Deschanel become the adorkable star she is today.