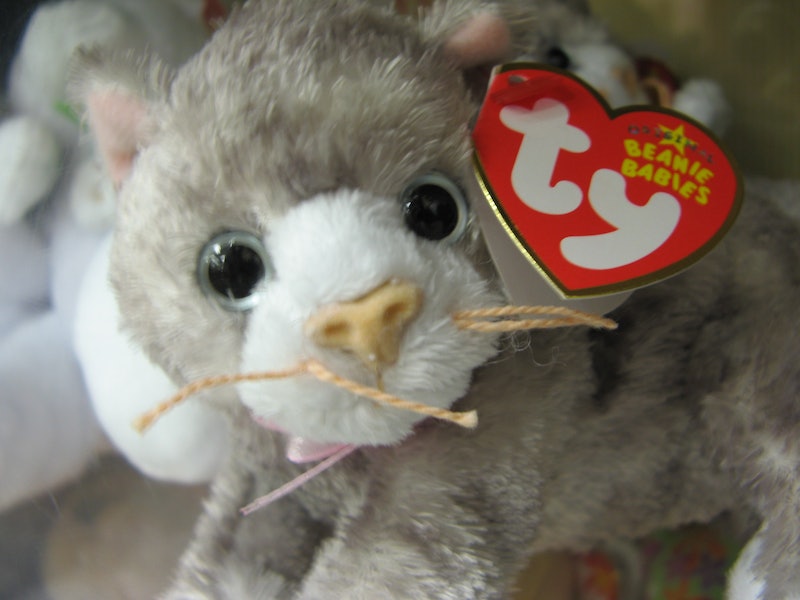 You better believe that, as a child of the '90s, I hoarded Beanie Babies like my life depended on it. My favorite was Hissy the Snake, because I always thought he was the most misunderstood, but I also had my paws on Spot, the black and white puppy, Claude, the tie-dyed crab, and basically every single collectible bear to hit the shelf — including the royal purple plush Princess Diana commemorative bear which, much to my shock and surprise, is currently being listed on eBay for a whopping $30,000. Of course, that got me thinking about my other toys: How much are Beanie Babies worth, really? As a person who spends more than half her paycheck on rent money alone each month, I had to know.

Part of the reason we all obsessed over Ty Inc. toys when we were younger was because we were all convinced that, some day, our curated collections of bean-filled animals might be worth a small fortune. Why save for college when you had just swapped your Squealer the Pig Beanie for a Patti the Platypus and a Splash the Whale at your last play date?!? (Some of the kids in my neighborhood were kinda suckers.)

If you're anything like me, though, you eventually forgot all about your stash of once-treasured Beanie Babies, who ended up meeting a dreary fate buried in a box in the basement. In fact, it's probably not until stories like that of Leah Rogers and Ryan Flanaghan — the English couple who discovered the first edition Princess Di bear they found at a flea market for $15 could be worth more than $90,000 — that you even think about taking your precious playthings out from their hiding places. Who needs a tax refund when you have 20 gently used plush bags of "beans" just waiting to be put up for auction on eBay?!?!

Of course, for Beanie Babies to be worth anything, you need to have a buyer. You might think your mint condition, first-edition Flash the Dolphin Beanie Baby is worth the $5,000 asking price you've posted on eBay, but unless you have someone who's willing to pay for it, you're kind of reaching for the stars.

But hey! That shouldn't stop you from trying. So how are your favorite Beanie Babies faring on eBay, currently? I decided to find out.

Rogers and Flanaghan may be asking for $30,000 for their commemorative bear, but apparently there is an even bigger profit to be made from having one of these first edition toys in your possession. This bear, which first made its debut in 1997, is going for a staggering $300,000... though, strangely, this one has yet to receive any takers. And with this seller's no returns policy, you better be extra sure this is an investment you're willing to make.

This "very rare" Mystic the Unicorn is a first generation, which may explain its $400 price tag. However, it has yet to receive any bids... probably because there are other Mystics on the Internet that are being sold for as low as $1.99.

Flash the Dolphin was one of the original nine Beanie Babies to be released by Ty in 1993. That means she's gotta be worth something... right? Some sellers have been so bold as to put this baby on the market for around $60 (which, if you think about it, is a lot considering how much you originally paid for it), but expect to get maybe $20 tops for yours. Sorry, guys.

It is possible to find a few Spots listed for upwards of $100, but for the most part, listings like this one are more the norm. The adorable black and white dog was also released in 1993, but even so it seems an overabundance of this little guy has brought down its value.

My fave! THAT TONGUE! Who cares how much this is being sold for on eBay? Keep your measly 90 bucks — my Hissy is priceless.

Twigs the Giraffe may have been cute, but I guess cute is only worth so much these days. Most of the Twigs I found on eBay ran between $2 and $12.50.

You can try to sell your Patti the Platypus for $100, but if this listing is anything to go off of, there aren't a lot of buyers out there who are willing to cough up a Benjamin Franklin. Hey — it was worth a shot!

It seemed like EVERYONE wanted a Bongo in the '90s. Had I known I could sell mine for $9,000 in the future, I maybe would have thought twice before trading mine for, I don't know, probably a Twigs now worth two whole dollars. #moneygoals

Are you a proud mama to a first generation Pinchers? See if you can beat $150!

Another 1993 original, Legs the Frogs could bring $350 to your wallet, if you kept this one in perfect condition. Although just a warning: you'll be competing with a lot of people who are selling theirs for $5.

Cubby the Bear was another favorite among my friends. Here's hoping one of them finds themselves $81 richer.